I have no idea how this happened...but Tim Horton's Rrroll-up-the-rim-to-win campaign was well underway before I heard about it. We were out and about on Friday afternoon...and stopped by Tim's for a coffee...and were handed our rolling-rim cups. The coffee hit the spot...even if the cup was not a winner! 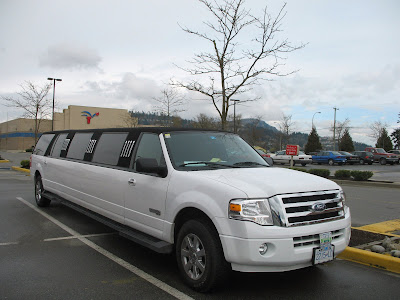 And why was this limo parked at Tim Horton's? It seems someone must be counting on winning big...or they just thought they would visit Tim Horton's in style...or they brought all their friends and relatives to have a coffee!

As you may or may not know...I love all things coffee. I even have coffee jammies! 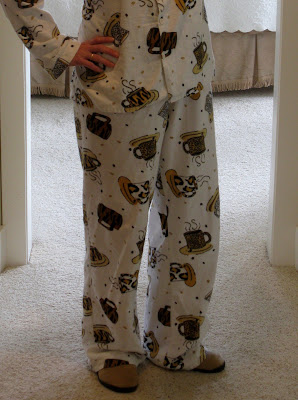 Emme and Spencer asked me one day if these were the only pj's I had. Well...no...but they are my warmest, cosiest lounging jammies...and seem just right for sitting around and sipping coffee in. I've had them since before my granddaughters came along (and they are now seven)...a gift from my sister who can't bear coffee...and likely thought pj's with coffee mugs were better suited for me. And it helps that they came from 'Tall Girl' and are plenty long enough!
Here's the thing...I'm not even feeling a little bad about my love of coffee. Not after reading the results of a most recent study which touts the benefits of java.
It's good for your brain! Three cups a day keeps dementia away...such were the findings of an intensive study at the University of Finland. Researchers who followed 1,400 middle-aged people for 21 years to find out who later developed dementia, found coffee drinkers have a significantly lower risk of getting the memory-destroying disease.
Ohhh...I like that study. Just how coffee might protect the brain isn't known...but I'll push the limits. And I'll let you know if I get any bonuses at Tim Horton's this month.
Have a great day...and have a cup of coffee...it's good for you!