thinking outside of the box...

Pizza is round...and comes in a box...that we all know.  How about trying some pizza that is square...and is served to you at a table overlooking a most lovely lake? 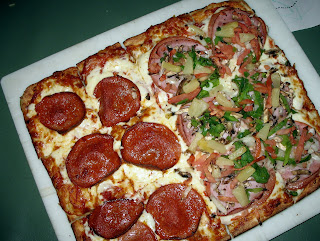 We did just that...last Friday night. It was our date night...but we had three munchkins along

...and thought square pizza at the lake might be just the thing.

It was just the thing...although one of our munchkins opted for lasagna instead...and another picked off all the cheese...and the third one 'oooohed and awed' and declared it to be delicious...and ate next to nothing.  Oh...but the mandatory carbonated beverage that accompanies the pizza...disappeared in no time!

J. Beethoven's Pizza has been an institution of some renown at Cultus Lake since 1979. It was then that Mike Vitow arrived in our community...with a suitcase in hand...and some wonderful Italian recipes from New York...where he grew up.  He found the perfect location...right on the lake...and came up with the name while watching the movie 'A Clockwork Orange' which featured the music of Beethoven.  The Province newspaper has featured J. Beethoven's Pizza...and customers go to great lengths to check them out.

We took our taste testing committee there last Friday night...and we'd go again.  As for the munchkins we had along...they are always game to go on an outing...although eating 'outside the box' doesn't always go over big. 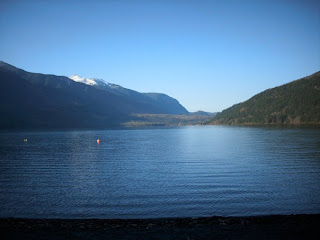 We had visions of spending some time at the lake once we were done with supper...but forgot that the evenings are very short at this time of the year.  We discovered that the lake looks quite different under the cover of darkness...and the munchkins were not that excited about beaching at night.  My advice...if you are driving out to the lake...be sure the lights are still on when you get there!

It's Friday again...and today I am thinking of something 'inside of the box'.  I'm thinking of a new camera that I am in the market for...this may just be the day.