The Masai tribe of Kenya has somehow managed to retain it's ethnic culture, despite all western influences.  For the most part, they live live just as they have for centuries.  They are a semi-nomadic tribe... 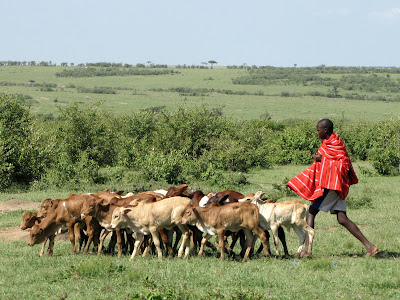 ...and still herd their cattle as they always have.  If there is no source of water...they move on.  The cattle are their source of food...and their entire way of life revolves around their cattle.  He who has the most cattle and children is the wealthiest!
Just outside the game reserve where we were on our safari...is a Masai village.  We were invited to go for a tour...and were glad for the opportunity. 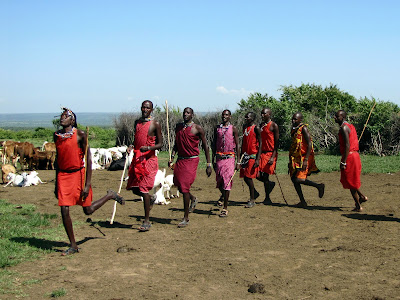 The Masai warriors were ready and waiting for us when we arrived.  They welcomed us with a traditional dance.
To be a Masai warrior is something to be proud of in their culture.  From boyhood on they learn the responsibilities of being a man and a warrior...with their fathers and other elders as mentors.  Their role is provide security for their animals and families. 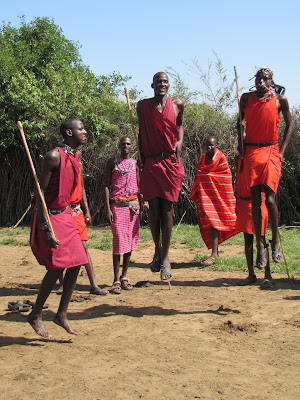 Part of their routine is to jump...from a standing position straight up. And jump they did!  Apparently the higher they jump...the better their chances of finding the perfect wife.
They challenged our guys to come jump with them.  Here's what we discovered...white man can't jump! 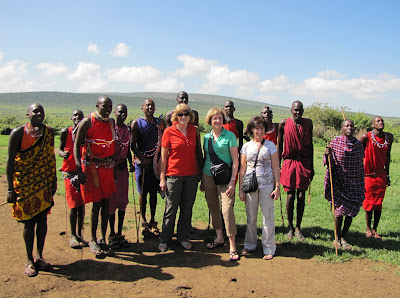 And when the dance was over...they wanted to pose with the girls.  They were a friendly lot! 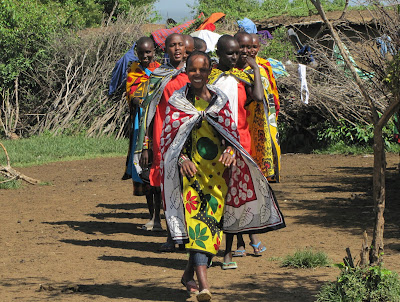 Then the girls came out of the village to welcome us...and we followed them back for a tour. 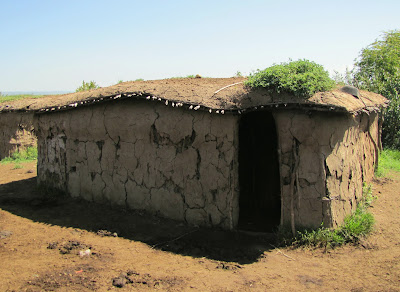 Their village is small...maybe ten little mud homes. The houses are built by the women...of sticks, mud and cow dung.  They are tiny...usually with two rooms and not high enough for adults to stand fully upright.  Around the circle of huts is an enclosure made of sharp sticks with thorns...used to protect the tribe and their cattle from predators.  The entire herd of cattle and goats is brought into the village for night.  We were very careful as to where we stepped! 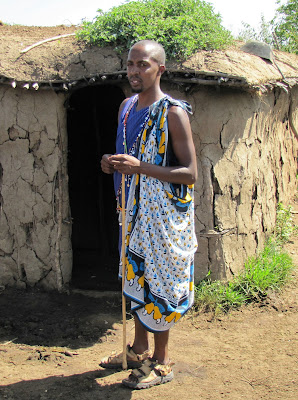 The chief's youngest son was our tour guide.  It seems he must have broken with tradition, as he was still attending school and spoke fluent English.  He invited us into his home...sleeping and cooking quarters for his unmarried siblings and his parents.  We stooped to enter...and found it so dark and smoky inside that it was difficult to see.  There were no windows...just a tiny hole in the roof which let in a little light...and allowed some of the smoke from the smouldering fire to escape.  We couldn't get back to the fresh air soon enough!
Our tour guide was the youngest of nine children...and he introduced us to his mother. 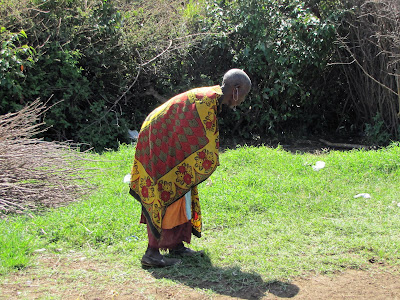 Stooped and tired...she looked much older than her 65 years. 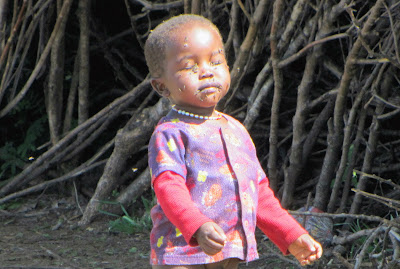 Her grandchild played nearby...unable to open his eyes for the flies that clung to him.  Our hearts went out to these people... 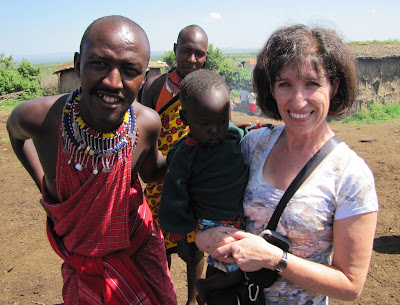 ...especially the children.  When our tour was over...we discovered it wasn't really over! 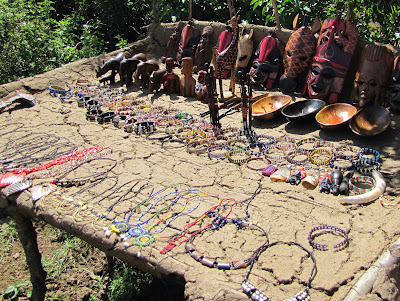 The only way out of their compound was past the tables they had prepared for our benefit...tables spread with their handiwork, which they were hoping we would purchase.  Of course we all came away with something. 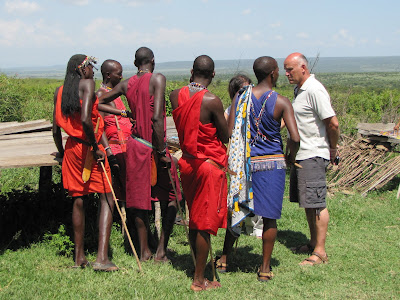 Some took a long time to make their purchases...they know how to drive a hard bargain.  Hubby, on the other hand...decided to pay more than the asking price.  They needed the tip more than we did...he reasoned. 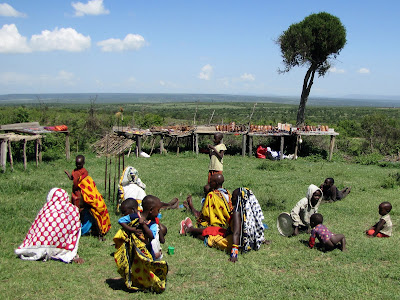 While we 'shopped'...the children played nearby. 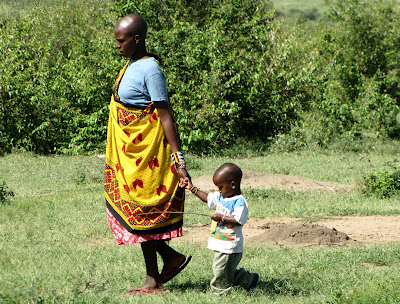 The women and children all keep their heads shaved. 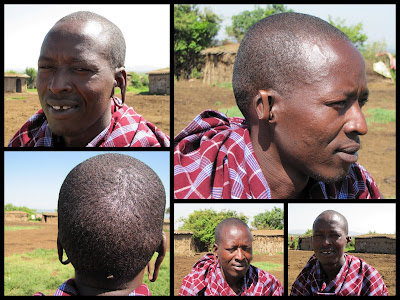 Both men and women pierce and stretch their earlobes....and wear metal hoops in their ears.   The Masai are a tall and distinctive looking people. The men are usually seen wearing a red shoulder cloak and carrying a spear...while striding purposefully across the field. 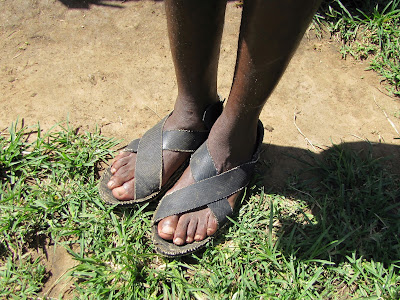 On their feet...they wear sandals made of old rubber tires.  When he saw me photographing his feet...he wondered if we might want a pair of sandals just like his.  He escorted us back to our vehicle...and we said our farewells before returning to our safari camp.  Little did we know that we would be meeting again in a few hours.
Following our afternoon game drive, we signed up for a bush dinner.  We had no idea what exactly that meant...but we knew we would be eating around a campfire out on the reserve (while the lions roamed nearby)...rather than back at the lodge. 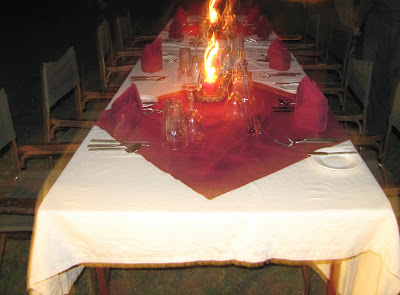 We never really expected to have fine linens and china out there...but we did.  The food and fellowship were great!  As for the entertainment... 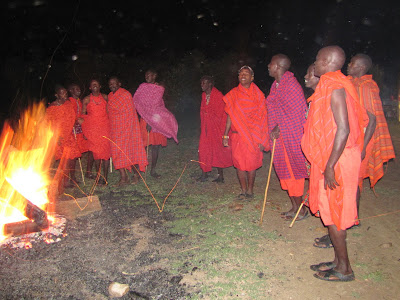 ...our Masai friends came out to perform...this time around a fire.  It was a Masai welcome we won't forget!
Over the past year I was involved in supporting the MCC goat stocking program, aimed directly at helping the Masai people become self-sufficient even in times of drought. Our friends in Kenya took part in the first goat distribution last week, and you can read about it right here.  In big and small ways, there are things we can do to help those in need...at home and around the world.

Email ThisBlogThis!Share to TwitterShare to FacebookShare to Pinterest
Labels: Africa