Every wedding has it's behind-the-scenes stories...ones that most of the wedding guests knew nothing about.  I'll let you in on few of those today.

Like I mentioned yesterday...we thought it would be fun to involve some of the kids in our life in the wedding ceremony. 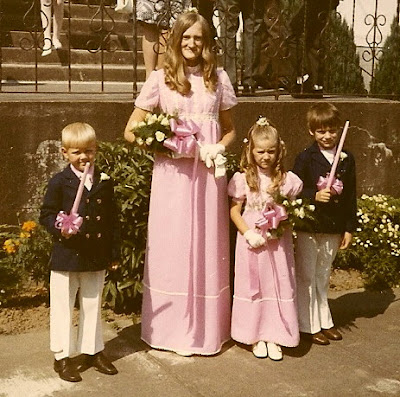 Kevin (nephew) ~ bridesmaid ~ Heather (niece) ~ Billy (brother)
So...Billy and Kevin were asked to light the candles...and Heather was the sweet flower girl.  The boys were not quite tall enough to reach the top of the candelabra...and so we had special stools made for them.  They did a fine job of lighting the candles without setting anything else ablaze.  It was my brother's antics at the reception, however, that brought out the local fire department and put an end to the party.   With a little encouragement from his older cousins...he had pulled the fire alarm!  What would a five-year-old-know?

As for Heather, the flower girl...we really started something.  When she was married many years later...she had our daughter Heidi as her flower girl.  And when Heidi and Tim were married a decade ago...they had Heather's daughter Sarah as their flower girl.  End of story...we think.

Back to our wedding...once the dinner and reception were over, friends and family gathered in my new in-law's back yard for an 'after party'.  We changed into our 'going-away' outfits and opened gifts...and had a good time visiting with everyone.  My uncles had something up their sleeve...something I had never heard of before...and was a little leery about.  They called for two chairs to be brought out...and tied them together.  Then we each sat on a chair... 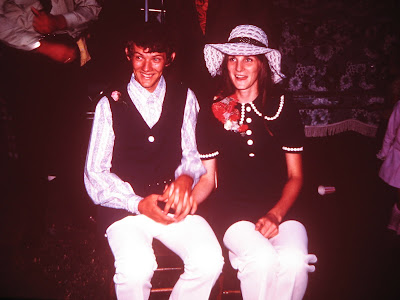 ...and were hoisted high into the air by my uncles.  Though I was quite certain it would all end in disaster...they somehow pulled it off.  In some cultures...the chair lifting experience is a wedding tradition. As for me...I have only seen it done once...and that would be on July 31, 1971.

Another wedding custom that I am happy to say has fallen by the wayside, is that of the 'car chase' as the couple tried to leave for their honeymoon.  Knowing we would be the target of just such a chase...elaborate plans were made, as to how to escape without being caught.  Our car was hidden in a neighbouring community...and if we could only get to our car, we would be home free!  We realized we were in trouble when we noticed a procession of vehicles lining the road as we were about to leave...mostly uninvited guests, I might add. What ensued was a lot of 'erratic driving'...calling for intervention by several officers of the law.  I was never so happy to seethe lights of the police cruiser flashing behind us!  We told the officers our story...and they kindly held back all the pursuing cars, while we made our get-away.   It would have made for a good movie.  It did not make for a relaxing end to our wedding day!

When we finally arrived at our hotel...we opened an envelope that had been given to us as we left the 'after party'. 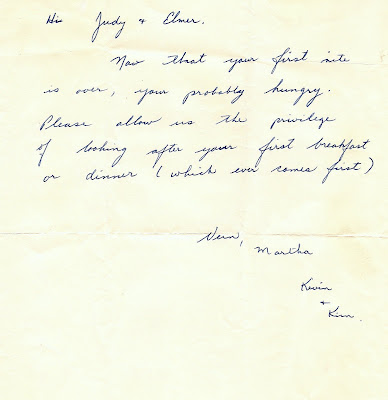 How sweet was that!  Elmer's sister and brother-in-law were treating us to breakfast on our first morning as 'Mr. and Mrs.'.  After all these years...I still remember where we ate that morning.  And, as you can see...I still have the letter.  And years later when Kevin and Kim (our niece and nephew) were married...I copied the letter and we sent them out for their 'first meal' as well.