putting it all on paper!

I've always liked writing things down.  I wish I had kept kept everything I wrote in the first few decades of my life...but at some time I decided that there was no point in keeping all that 'old stuff'.  I have kept all my calendars from throughout the years...which are also a diary of sorts. 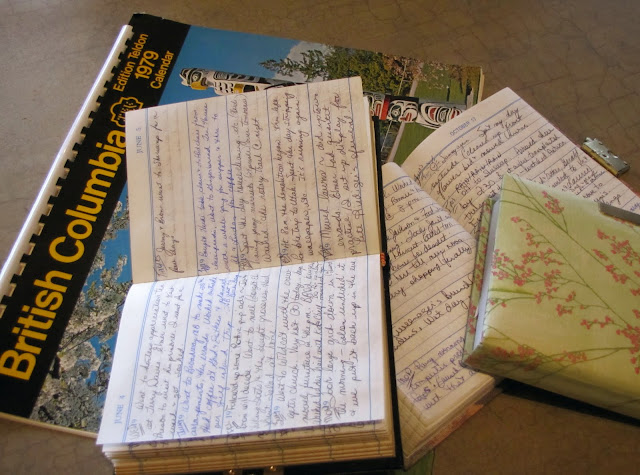 And for many years I kept a 'Five Year Diary'...long on events and facts but short on words and thoughts.  How else would I now know that on July 19, 1999 we picked Pierre and Ute up at the airport in Vancouver?  We were home by 7 pm and had dinner together.  Jeremy and Broni came by to say 'hi'.  We packed up the motor home in the evening.   That means that twelve years ago today we were preparing for our road trip to Alaska with our Swiss friends.  If it wasn't written down...I'd have a hard time even remembering the year...never mind the details.

Here's another entry...June 3, 2001 Had the kids over for lunch.  Heidi and I played tennis in the afternoon and she won. OUCH!

Some four years ago...I put down my pen and took to journaling on-line.  The idea is the same...the format a little different.  The blog is a little longer on words...and big on photos.  But in reality...My Front Porch is simply a journal of my life.  It is a book...being written one short chapter at a time...for my family, my friends and anyone else who cares to read it. But I have found that my blog no longer contains some of the wee details that were recorded in my five-year diaries.  Details such as what I may have served my guests for dinner.  I was inviting friends over...and then trying in vain to remember what I had cooked for dinner the last time they were our guests.  I finally realized that could only be rectified by writing things down.  So I began a 'hospitality journal' this year..in which I record the menu when we have friends over. 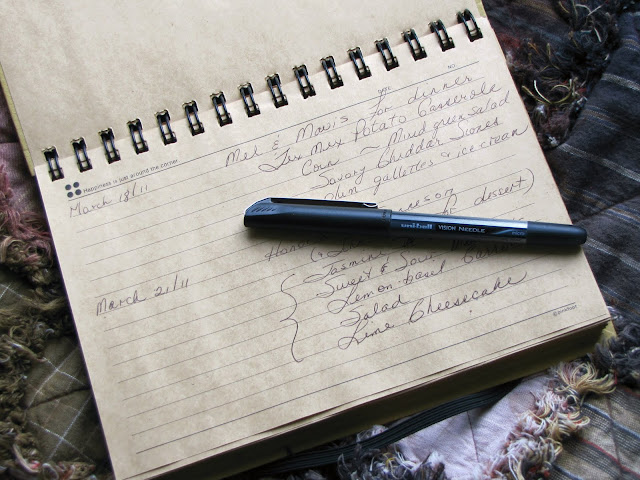 So...if you had borscht and buns last time you visited...I'll be sure to switch it up next time!  I'm liking my new system.

As for those old journals and diaries...I quite enjoy reading the things I recorded long ago.  For the most part...it is trivia.  But it's the little things in life that make up the whole!

And I'm also most delighted to have my father-in-law's writings...some poetry and some simply a record of his early years.  There's just one problem... 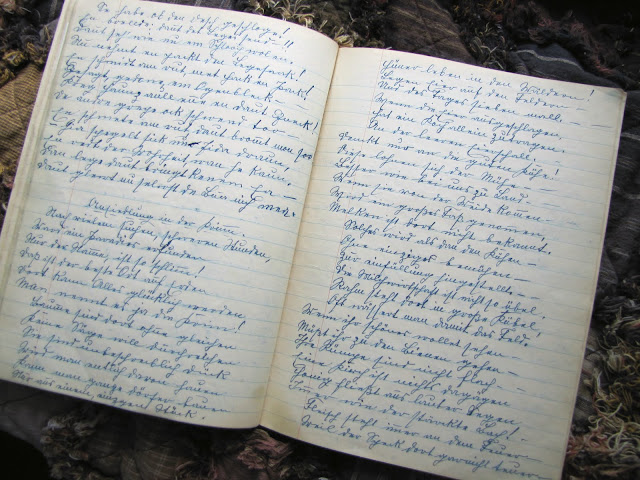 ...that being that I have no idea what is written on the pages.  It is written in a German script that no one in my world can read.  I plan to find someone to translate it...soon.  He put it all on paper...we won't let that go to waste!

I'm all in favour of writing things down.  Then it's OK to forget!