the weekend that was....

It seems the calendar is always full...appointments and events.  For the past few weeks I've known that at any time, I would get 'the call' and it would take priority over whatever was written on the calendar.  The two out-of-town trips scheduled for the past several weekends...went as planned and now we would be close to home for the next while. Heidi's due date came and went...and we spoke on Saturday morning.  She had pretty much given up all hope of presenting Daddy with a baby girl for his birthday that day...but told me to be sure to take the cell phone along on our planned outing that afternoon.  But of course! 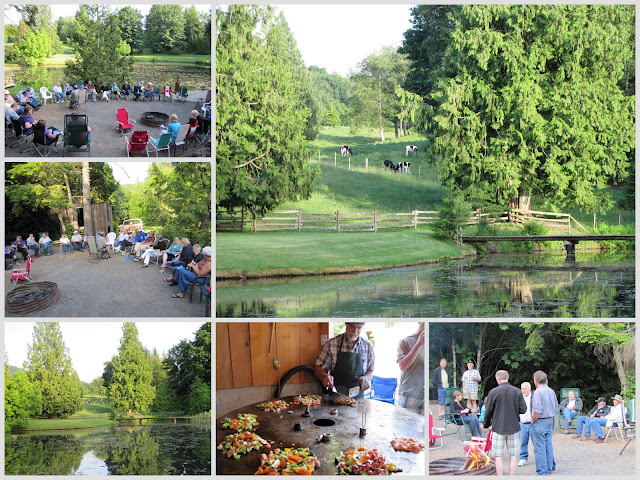 We spent the afternoon at Benanna Lake...a lovely picnic site on the private property of some friends.  (It's also the place where we send our heifers to pasture for the summer months.  I hope they know how good they have it!)  The occasion was a reunion for anyone who ever participated in the youth group of the country church I grew up in.  There's a reason you don't see too many young people sitting around the camp fire...it's been a few years since we were in the youth group!  It was organized by Walt...who also cooked up a fabulous dinner for all of us on his Mongoli Grill.  We all chose the meats and veggies of our choice and placed them on the grill...adding some nice zippy sauces to go with them.  After dinner we settled in around the campfire.  It was good to re-connect with friends from way-back-when in our old neighbourhood...and to hear the stories.  What we never heard was the ringing of the cell phone!  Apparently there is no cell phone coverage at this particular spot...and so Heidi tried in vain to call us.  When we saw Jeremy's truck (her brother) coming up the lane to the lake, we suspected he had been sent to fetch us.  Could we pick up Maggie ASAP...as Heidi needed to get to the hospital?  Yes...we could!
Maggie was most thrilled that she was going on a 'holiday'...to Grammy's house.  We settled her in for the night...and went to bed with the phone nearby to wait for the news of baby's arrival.  It was 4am before the call came...and I immediately sensed there was something wrong.  Heidi called to tell me the baby girl had been born an hour earlier.  She wasn't breathing...and took awhile to resuscitate.  Then she was whisked away to the nursery to be monitored.  Tim was with the baby...Heidi was alone with no baby to hold.  I asked how much she weighed. She didn't know...they didn't weigh her because they were too busy.  How do you console a mommy who hasn't been able to hold her baby?  She never even told me what they had named the little girl...though Maggie had divulged that 'secret' freely long ago.  I tried to reassure her that everything would be OK...and that we would pray.  And so we did.  And that was it for our night's sleep...as we awaited further news.
It was many hours before we heard from them again.  Baby would be in the incubator until at least noon...but seemed to be doing fine.  We could bring Maggie up to meet her little sister in the nursery... 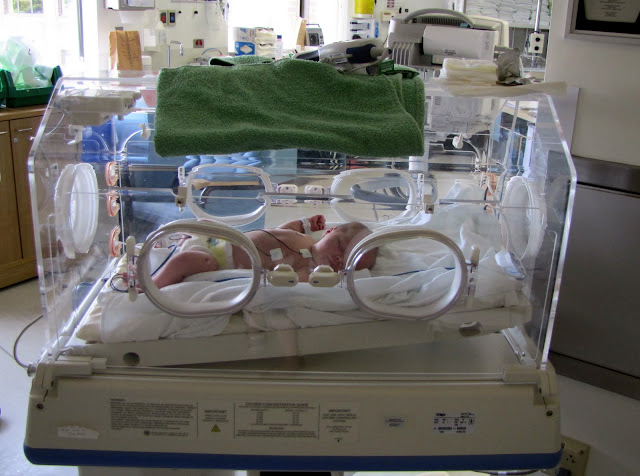 ...and so we did.  Our beautiful little grandgirlie slept peacefully in her little bubble.  Twelve hours after her birth...she was able to leave her little chamber and Mommy was finally able to hold her new baby.

We gave Mommy a few hours to enjoy Baby Lucy... 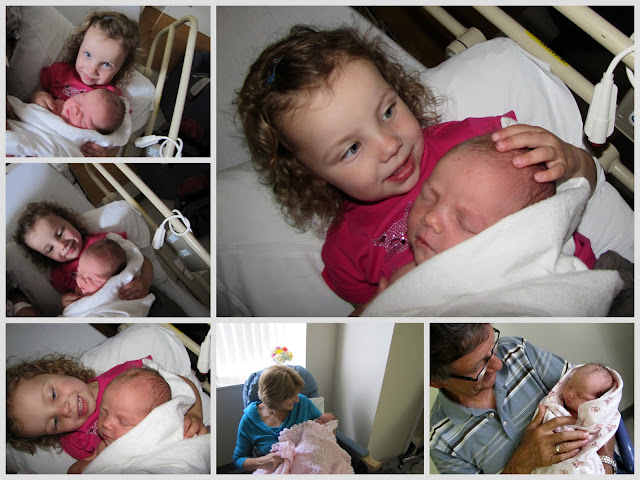 ...and then we returned to have our turn at cuddling!  Oh, what joy!

As for Maggie's holiday at Grammy's house...it went very well! 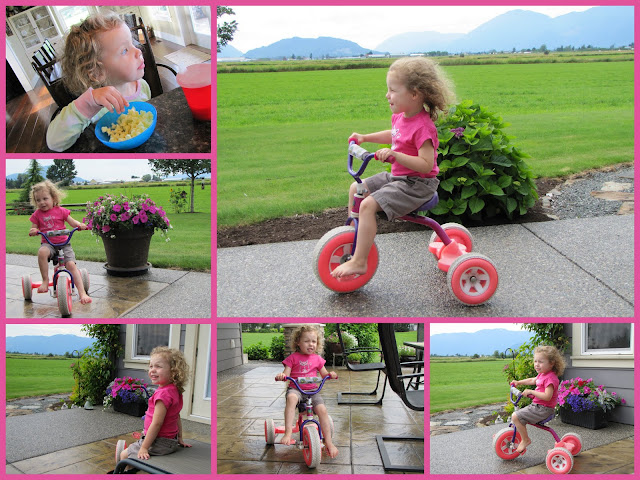 What's not to like...if you get popcorn twists for breakfast and immediately head out to the cycling circuit for the day?  Her mini-vacation ended yesterday...and she is now at home learning how to be a big sister.  We'll see how that goes!