I've been reading a book this past week...one called Tuesdays With Morrie...and came across this quote.

A teacher affects eternity; he can never tell where his influence stops.
~ Henry Adams 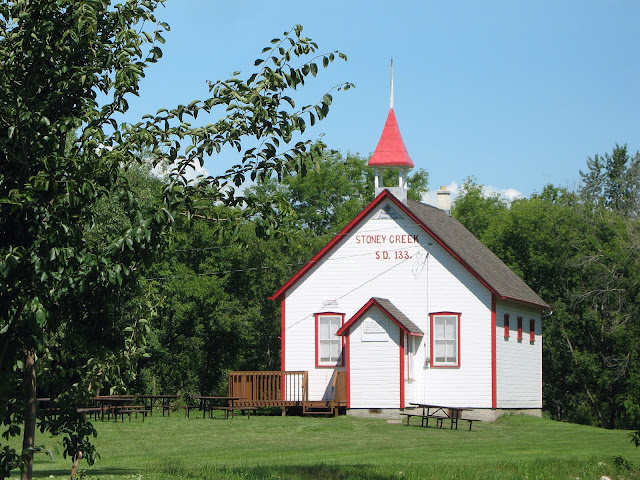 I have thought a lot about the teachers of my past lately.  Seeing the obituaries of some of my favorites in the paper recently...got me thinking about what an influence teachers can have in our lives.

I recall with fondness the two years I spent in Mrs. Smith’s class. She made books come alive...and I can still picture her reading The Boxcar Children to the third grade class. She also was a gifted music teacher...and managed to instill a love of music in even those students who had not a musical bone in their body. Then there was my very serious grade six and seven teacher...who came with the name Earnest. He piqued my interest in ancient history and poetry...though I don’t recall having much fun in class. In junior high I had two excellent English teachers. I discovered my love of words...reading them and writing them.

Fast forward to my final year of high school. It was a great year...carefree and a breeze. I had classes and teachers that I enjoyed...and the best of friends to share those days with. My English teacher was also involved in the production of the school newspaper...appropriately called The Tattler. One day as we arrived for class...he told us that we were all to be ‘roving reporters’ during this particular session. Our assignment was to wander about the school, document what we observed...as though we were writing an article for the school newspaper. We would be graded on our completed article...which we were to hand in at the end of the class. What’s not to like about an assignment like that? We were free to wander the hallways rather than sit in the classroom. I observed...and I wrote...and I handed in. I had no idea that my article would be in the next edition of the Tattler. On the day the school paper was published...I heard my name called over the school PA system. I was to report to the office of a certain teacher who I knew by reputation only...since he had never been a teacher of mine. I was totally puzzled...since I was not accustomed to being summoned to any office...ever. I went to the prescribed place...and found the teacher holding a copy of the school paper and demanding to know if I was the author of the article he had before him. I had to admit I was. He was absolutely livid...and said I had made him look like an fool.  He demanded an explanation...or was it an apology?  As I had wandered about the school that day...I had observed what I saw or heard from the hallway, but had not actually entered any classrooms, since we were not to disrupt. I can still recall as though it were yesterday...the open doorway at the back of his classroom and the droning voice of the lecturer. All the desks at the back of the room were vacant...and my observation was that Mr. X (that would be him) 'was waxing eloquent before an empty classroom'. And I carried on and noted the fun in Mrs. Pucher’s foods class...the chaos in Mr. Fulford’s French class...and the serious studying happening in the study carrels. I penned my observations...handed in the report...and never gave it a second thought. Until now, that is...as I stood before a teacher who was red-faced...and very angry. I apologized...and explained again what our assignment was...and that I had not meant to make him look bad. Had I really thought he was lecturing to an empty classroom?  Well, no...but that is how it appeared.  Well he would teach me a lesson...and I would spend my lunch hour in his office writing lines on the chalkboard. I humbly did as I was told. I have no idea what the lines were...but I know what that lesson taught me. Do not put your words in writing...they may come back to bite you! Though my English teacher gave me top marks as a roving reporter...the teacher in question squelched all creative writing ambitions I may have had.

Many decades later, I thought of starting a blog. And then I thought of writing lines that day...and wondered if I could actually be brave enough to put my words in print. One day I 'picked up my pen again'...and began to tell stories.  I still think of that teacher who managed to put a stop to my writing for years...but his name and face have faded from my memory. And mostly I recall all those teachers who were such an inspiration to me, and they were many!

Back to the book that prompted this post.  If you have not read 'Tuesdays with Morrie'...you might want to.  It is the story of one teacher...facing death by Lou Gehrig's disease...and his impact on a student. Though the teacher has now passed...his teaching goes on.  It was of special interest to me...since one of my former classmates is struggling through the final stages of Lou Gehrig's at this very time.  She is in my thoughts and prayers often.

And...for the record...I did not attend the cute one-room school pictured above.  It is a photo from my files...taken near my sister's place in southern Manitoba.

Have a wonderful weekend.  And...if you have a most memorable teacher you would like to tell us about...I'd love to hear your stories.