In my experience...furnaces last forever.  The farmyard house where we once lived (now Jeremy and Broni's house) is still on the original furnace (circa 1967).  How is it that our new seven-year-old furnace is having issues?  Since everything is electronic...only the repairman knows for sure...and he has no idea what the problem is.  So for now...the furnace comes on when it decides to...and we are keeping the fireplace aglow!  Thankfully, things are rather balmy outside for January...so we are not in danger of freezing just yet.

But we decided to get out of the cool house on Saturday night...and find a little heat.  We had complimentary tickets to an Abbotsford Heat hockey game...a local team which is a farm team for the Calgary Flames.  Dad and Marge love watching hockey...so we invited them along for the night out.  They quite enjoyed the game...though they did look for the remote control a few times..thinking there must be some way to turn down the volume.  Their observation was that hockey games have become VERY loud since they had last been.   When the game should have been over...the score was tied...and so it went into overtime.  By the time three periods are done...I don't really care who wins anymore...just get the game over with!  Having said that, I was a little disappointed that the Heat lost out in the end.

And when the game was over and done...we went to Dad and Marge's to enjoy a little birthday cake pie...in honour of Marge's 81st birthday. 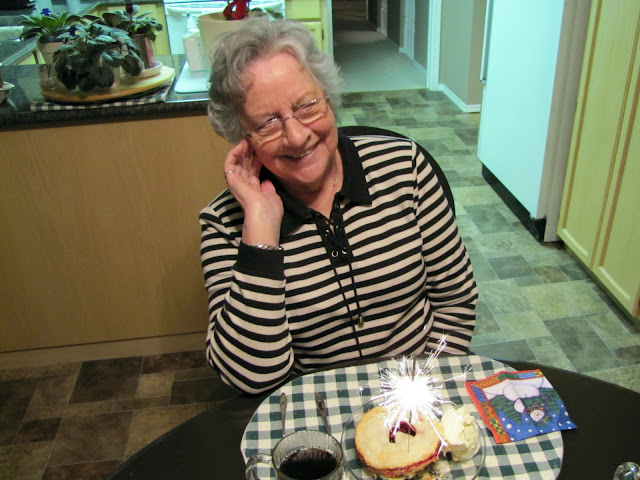 If you light a fire on top of a mini-pie...it passes quite nicely for birthday cake.  Marge has had to get used to Dad's dessert of choice...pie and ice-cream for every occasion.  Even if it was her birthday!

It has been eleven years since I met Marge for the first time.  Six months later...Dad and Marge were married.  Since that time we have shared many experiences.  We have seen the sites of Newfoundland together...enjoyed the beaches of South Padre Island...played many a game of Rook...been to family weddings...and funerals...spent time in hospital rooms...and shared good times around many a table.  The years have slipped by so quickly.  A birthday is always a good opportunity to reflect...and to send our warmest wishes.  And so we did!  It was a good way to warm up a winter evening.