welcome to the island of hawaii...

Often called the Big Island or Hawaii Island...this island is larger than all the other Hawaiian islands combined. So what exactly is it that draws visitors to the big island of Hawaii? Apparently it's the smoking volcanoes with their jets of fiery red lava...that are the biggest drawing card. (We passed on the tour of the volcanoes...since we had been there on a previous visit.) Where once the economy was driven by sugar cane...it is now mostly about tourism. 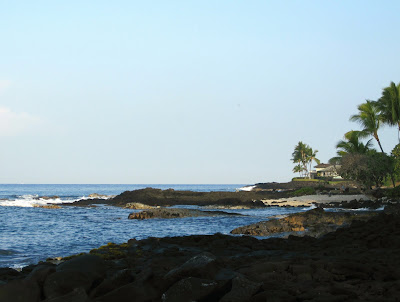 I'll take you on a brief tour of the island today...and then re-visit a few of my favorite spots another day. We stayed on the Kona coast...an area where it is hot and dry. If you were expecting palm trees and lush rainforests upon landing...you would be in for a surprise. 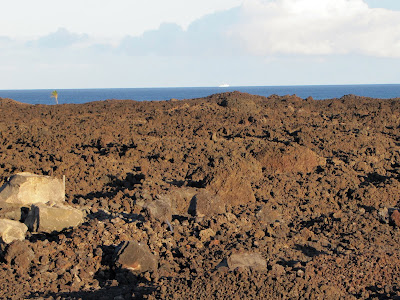 The area around the airport appears rather bleak...like I would imagine the surface of the moon to look! From the slopes down to the sea...everything is volcanic rock.

Kailua Kona is all about hotels and cruise ships...the centre of tourism and also the prime coffee bean growing area. Not far from our resort is a sheltered snorkel spot...Kahaluu Beach Park (sometimes called Turtle Bay). 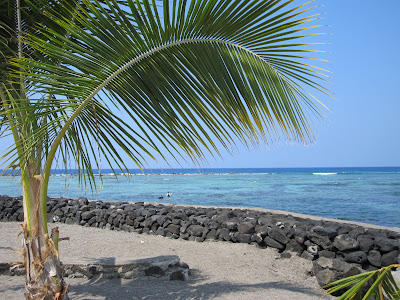 Fed by a fresh water spring...these waters are almost always calm, with colorful corals, rock formations, and hundreds of species of fish. Oh...and did I mention sea turtles? 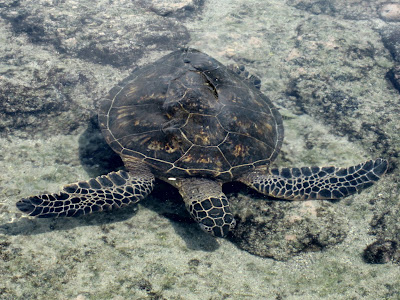 We swam with the fish...and the turtles...every few days. I invested in an underwater camera...thinking I might capture the reality of what it really is like under the water...but lets just say it was not a Canon! 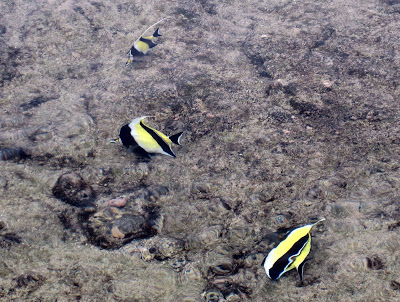 These fish swam about right near the shore...easy to photograph without getting wet.

The southern tip of the Big Island is the most southerly point in the USA. It's rather a remote little landmark...poorly marked and down one lane dirt roads...but with a little determination, even Canadian tourists can find there way there. 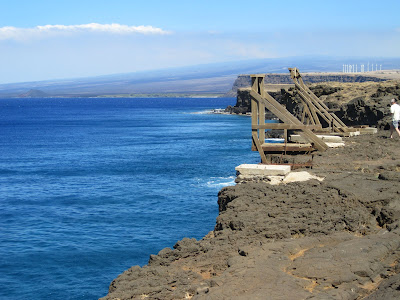 It's a popular fishing area...and the home of wind farms...since the wind never lets up. 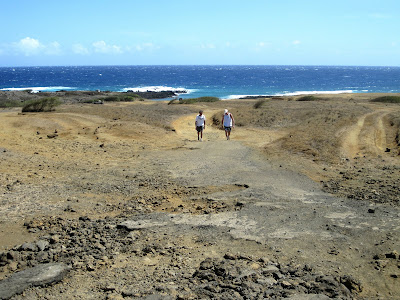 We reached the end of the trail...parked our vehicle...and hiked an hour along the coast to Green Sands Beach. 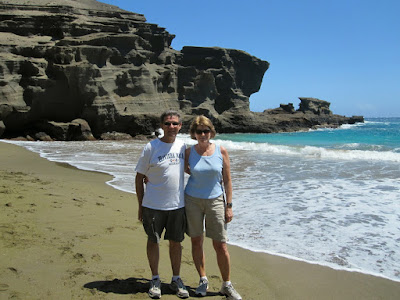 The wind howled the entire time...my sunglasses are permanently sandblasted...but the views were breathtaking and seeing the green sand was worth the effort! 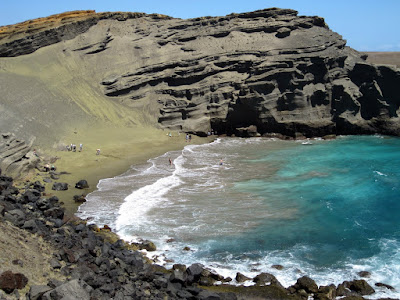 Green sand is formed by the gemstone olivine (also called peridot) and has been brought to the surface through volcanic action. This particular beach is the most well-known and beautiful...but there are many pockets of green sand on the Big Island. 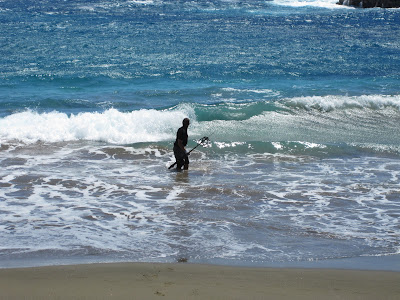 We had our lunch on the beach...watched someone spear-fishing...and then began our trek back down the long and windy trail. We took note of the signs warning us that it was an offense to remove any sand. We tried our hardest to leave it behind...but it seems we had no choice in the matter!

Though the big island of Hawaii is not known for it's fabulous sand beaches...it does have one of the world's top-rated beaches as it's own. 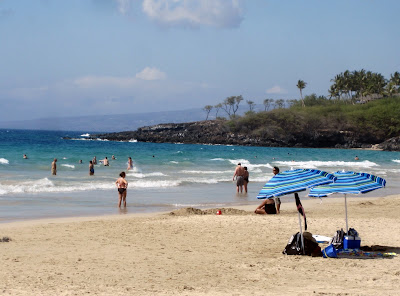 Hapuna Beach is part of a state park...and has a 1/2 mile beautiful white sand beach. The turquoise water has perfect waves for bodysurfing or boogie boarding fun. We spent a wonderful day at Hapuna.

The eastern side of the Big Island is a whole different world from the desert area where we stayed. It is in this tropical rainforest that Hilo is situated....Hawaii's second largest city. It happens to be the wettest city in the USA...and maybe the world...with an average of over 200 inches of rainfall per year. Hilo has also taken the brunt of several tsunamis...160 people lost their life in 1946 and another 61 in 1960. We arrived in Hawaii the day after the tsunami scare of 2010...though all was well this time, a major evacuation took place along all coastlines of the Big Island. The resort at which we stayed had also been totally evacuated. 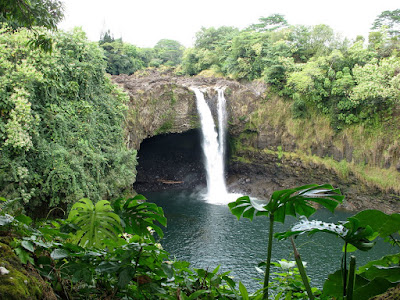 If you ever have a chance to visit the Hilo area...be sure to check out Rainbow Falls right in Hilo. 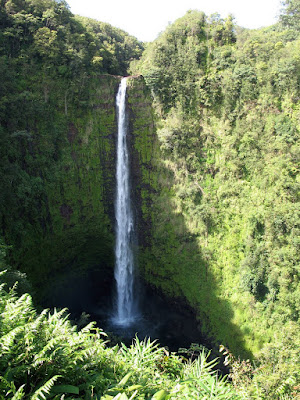 Though zip-lining had never been on my radar screen...I somehow found myself in a group of a dozen zip-line enthusiasts on an adventure on the North Kohala Coast. 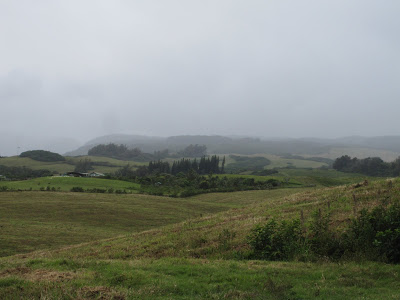 This area lies about ninety minutes north of the Kona Coast...a beautiful area of rainforests, waterfalls, and canyons in a wild and uneven terrain. 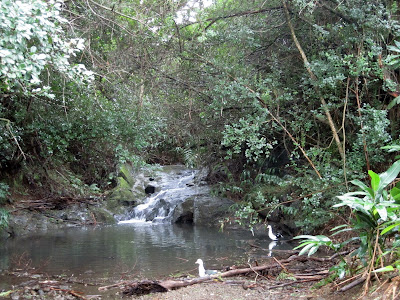 Our adventure included a half-hour trip into the hills in an army vehicle...eight ziplines and a suspension bridge. The course begins with shorter ziplines...and ends with one that is more than 1500 feet long. By then there is no turning back!

Having survived the zip-line adventure...we drove to nearby Waimea and cattle ranching country. The interior of the island is mostly pastoral meadows and rolling hills...and much of it is owned by the largest private ranch in the United States...the Parker Ranch. 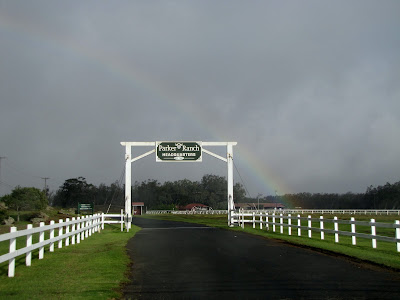 We had visions of touring the ranch...as we had done about a dozen years ago...but found that visitors are no longer welcome on the ranch and tours are a thing of the past. The ranch can trace it's origins to one John Palmer Parker who arrived on the island from Massachusetts in 1809. He befriended the King...and eventually married the daughter of a Hawaiian chief. In 1847 he purchased the lands that were to become the Parker Ranch. That is more than 160 years ago...and the ranch still has over 50,000 head of cattle and 500 horses...so we are told. 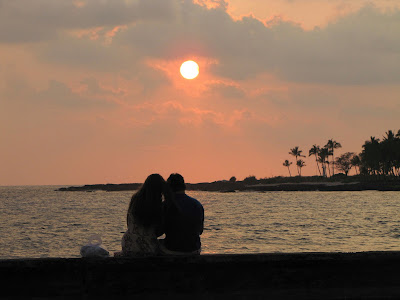 That, my friends...is an overview of the Big Island of Hawaii...and ends our tour for today. I know...it looks more like a social studies lesson than a vacation. We'll return one day soon...for a second look. You wanted to see every flower I documented...every fish that I tried to photograph...and all the feathered friends that gathered near my chaise lounge...and those hundreds of sunset shots...right? I'll try not to disappoint you!

Have a fabulous Monday...