Before we left on vacation a few weeks ago...we stopped by Lellow to say good-bye to our daughter, Heidi. 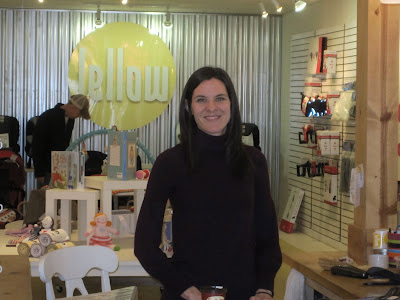 I took a picture of her behind the counter...since I heard rumours that there were changes in the wind...and it could be my last chance to catch her there. While we were away...Lellow officially changed ownership...and the employees bought the business. How fun is that? You know you have hired the right employees...if they love their work so much they want it as their own.

When Heidi and Fran opened their shop in town a few years ago...they had visions of bringing their own children along to work with them. And they did...for a time. Then they decided they needed an employee or two...so they could have some time off. And now they are officially unemployed...footloose and fancy-free. Heidi and Maelyn came for lunch yesterday...with not a care in the world about getting back to work.

If you live in the area...you can still shop Lellow Kids Gear...just like before. But you will no longer find Heidi or Fran behind the counter...or Maelyn in the display window.

Email ThisBlogThis!Share to TwitterShare to FacebookShare to Pinterest
Labels: family, minutia of life