Yesterday was the annual salsa marathon.  What that means is that I pretty much set the day aside for making salsa. 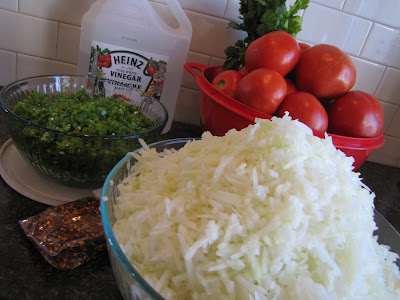 Forty pounds of tomatoes to peel and chop...40 jalapeno peppers to mince....a big bowl of onions to make me cry...and all the other goodies that add a little zip and flavour.

And since I have done this for so many years...I should know the ingredient list off by heart.  So how was it that I was about ready to put the first batch of salsa on to simmer...and realized I had no green peppers?   Since I don't exactly live near a store...that is somewhat inconvenient!  But I thought I would just whip down to the country kiosk nearby that sells peppers...and so I did.  They had red and yellow peppers...but not green.  On to the next roadside stand...another mile and a half down the road.  They had plenty of red and yellow peppers as well...but no green.  By now I had added an extra five miles to my trip to the produce market in town...and that is where I went in the end.  And so my salsa making had a little interruption...but eventually got back on track. 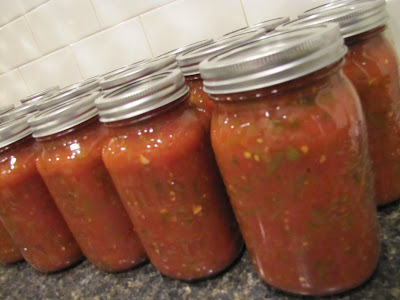 Heidi came to help after lunch...and brought along empty jars...which she plans to take home full.  That's how it works.  Oh...and for our afternoon snack we had crackers and salsa...the last of the 2009 stock.  How's that for timing?

The farmer's almanac says we are in for a cold winter.  We are ready...we have some heat in a jar!

Email ThisBlogThis!Share to TwitterShare to FacebookShare to Pinterest
Labels: kitchen, minutia of life