going green down on the farm...

We have a new tractor over at the farmyard...one that suits the driver to a tee! 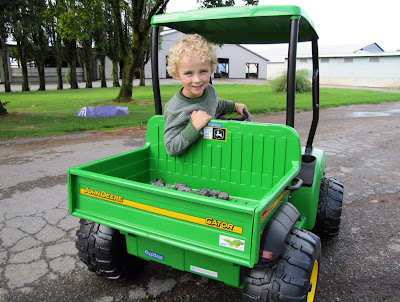 And here's the thing...it is green in every sense of the word.  It is battery operated...uses no fuel.  Considering the size of the annual fuel bill over there...that's a good thing!  The down side is that it needs to be plugged in to be re-charged quite frequently...and not always when it is convenient. 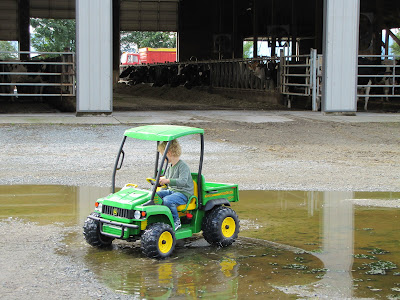 I went over the day he took delivery of his new tractor...and noticed he had already found the puddles.  He was having a lot of fun...that's what tractors are for, right?
Maelyn came for a visit the next morning...so we walked over to the farm thinking her cousin might just want to give her a ride on his new piece of equipment.  Too bad...he was not around... 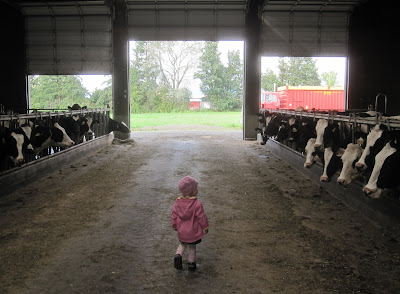 ...but we checked out the barns and found Uncle Jeremy working out back on a tractor.  She declined a ride...as she held her ears. 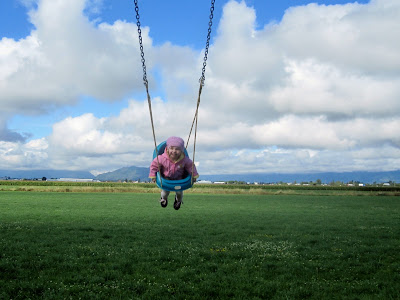 Since there was no tractor ride to be had...she opted for the swing back at my place.  We already know the command..."high"!

Her mom took her back to the farm later...and Ryder was more than willing to give his cousin a ride on his quiet, green tractor.  Apparently they chatted to each other as they rode around the yard.  I'm sure she was saying, "go fast"!