Any table can be transformed into a festive one with the delightful touch of folded napkins.  This can be one of the simplest and least expensive ways of decorating your table...and most folded napkins work equally well with paper or cloth.

There are many ways to fold a napkin...most of which I have never learned.  There is one way, however...that I can pretty much do in my sleep. Weddings, banquets and dinners...I have folded hundreds of napkins this way. The finished napkin looks rather like a crown... 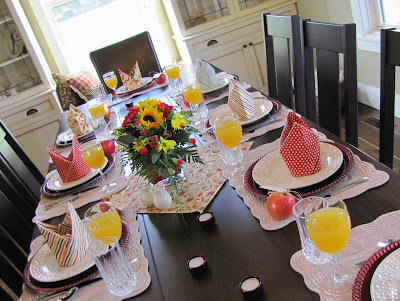 ...like the ones you see on this table.  Since I have people asking me from time to time how this is actually done...I will attempt to show you.

At this point, you have a flat hat with twin peaks...which can be stored like this until ready to use. To place on table, open up from the bottom to complete your 'bishop's hat'.  If it all looks Greek to you...check out this tutorial that I found on-line...which explains it much better than I could.  Pull out a few napkins and follow along...you'll soon be a pro.

And while I am at it...let me share with you another intricate way of folding a napkin... 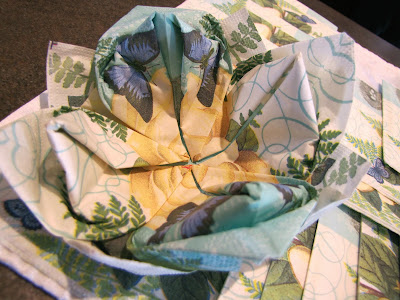 ...one which I just learned from my friend Julie a few weeks ago. I came home and practiced a few times. I won't be doing this one in my sleep, let me assure you...but I think I have it figured out. 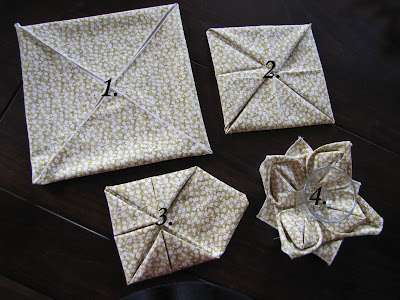 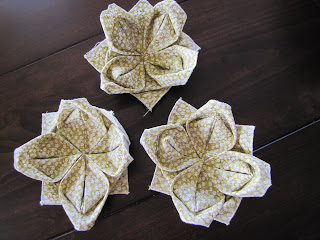 You should end up with a napkin that resembles a flower.  It looks rather like a nest...the perfect spot to add a little dinner favour.  My daughter was over yesterday...and we played with napkins...just for fun.  It seems to work better with paper napkins...but I rather like the look of the cloth ones as well.

Why not include one other simple way of folding a napkin? 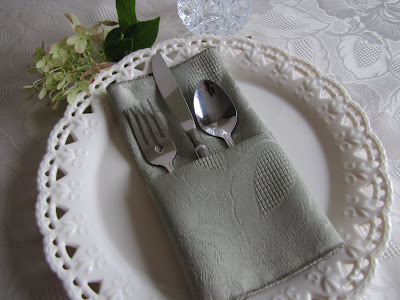 It's great for a buffet service...with the cutlery already tucked into a napkin.

Tuck the cutlery (or silverware...as I would say if I were American) into the pocket...and place on the buffet table.  This method works best with a large napkin...and one that is printed on both sides.

And that, my friends, is your napkin folding lesson for today.  Have a fun weekend!