She was born in the Ukraine...ninety years ago.  When others fled Russia in the 1920's...and came to Canada, her family stayed.   During the second world war...she had the opportunity to serve as a nurse with the Red Cross in Poland.  She lost all contact with her family...who had been sent to Siberia.  As the war ended...she somehow managed to escape with the retreating troops...and eventually came to Canada.  She knew not a soul...spoke no English...and was at the mercy of those who took her in.  Coaldale, Alberta was her new home.
She had heard from her parents that somewhere in Canada they had relatives with the last name of  Tessman.  How hard might it be to find them?  You have to know...that with this lady there is always a way!  She took out in ad in a paper that circulated around the country...wondering if anyone knew her long-lost cousins.  My mother-in-law was one of those she was looking for.  My in-laws responded to her ad...and invited her to come live with them while she settled into her new country.  She accepted their invitation...and when my husband was just an infant...Nellie R joined their family.  The name in itself was a bit of a problem since my mother-in-law was also a Nellie...as was hubby's sister.  Three Nellies in one household was just too confusing...and so her new Canadian name became Nyla.  The house was small...but they gave her a room to call her own.  She was about 30 years old at the time...and became like an aunt to my hubby.  Eventually she found employment in Vancouver...but on weekends she always came 'home' to her new family. By the time I arrived on the scene...Nyla had located her family in Russia and was eventually able to sponsor some of them to come to Canada.  Though she now had family to call her own...she was always near and dear to hubby and his siblings. 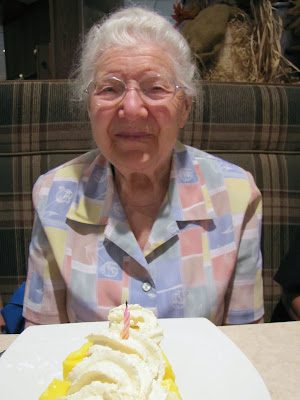 She celebrated her 90th birthday this month.  We couldn't let that slip by unnoticed!  On the weekend...we (her adopted Canadian family) took her out for lunch...and passed along our warmest wishes to her.  Thanks to my sis-in-law Martha for organizing the party!

After she retired, Nyla spent her days helping others.  She made nine trips to the Ukraine doing mission work.  They know her well at all the local hospitals...where she has regularly visited the sick over the past many years.  She was always willing to drive the 'elderly' to their appointments.  Every September she bakes up a storm for the local MCC relief sale.  She is still in good health...still driving her car...still spending her days living for others.  If you are at all connected to Nyla...you will have been the recipient of her needlework and baking. And most importantly...her prayers.  I'm so glad they took Nyla under their wings so long ago.  She is one special lady!