It's not all that difficult to serve up dishes at home that taste just like they came from your favorite restaurant. Just pop on over to Copykat Recipes, to find recipes for anything from Appelbee's Quesadillas...to Outback Steakhouse's Bloomin' Onion...to Olive Garden's Hot Artichoke and Spinach Dip. How fun is that?

Heidi (my dear daughter) called me a few weeks ago to see if I had any recipes that resembled the rice pudding we used to have at our local Pantry Restaurant. It was a rice pudding like no other...a creamy baked pudding, served warm...topped with a vanilla custard, smothered in whipping cream and sprinkled with cinnamon. It was big enough to feed the whole table...or the Heidi and I! We discovered that not all Pantry Restaurants are created equal, however! We were once out of town on a shopping trip & decided to treat ourselves to a rice pudding treat at the nearest Pantry. What a disappointment when the same menu item (at the same price) came in a little bowl that was hardly sufficient for the two of us. Well, that was many years ago. The Pantry no longer serves rice pudding...and I no longer go there.

But where would I find a rice pudding recipe that was comparable to the one we used to enjoy? It seems that copykat.com had never heard of the Pantry...much less their rice pudding. So I went to my own test kitchen and here is what I came up with. 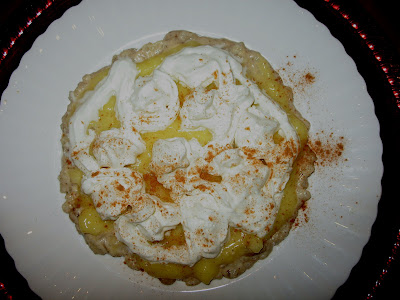 Place milk, rice & salt in the top half of a double boiler.

Cover and cook over boiling water for about 1 hour, or until rice is soft.
Beat egg and sugar together.
Stir 1/2 cup of the cooked pudding into the egg and sugar.
Then add egg mixture to cooked pudding along with raisins, cinnamon & nutmeg.
Cook for about 5 minutes longer. Remove from heat and stir in vanilla.
Cool slightly and serve warm.
(Also required to make this dessert extra special...your favorite cooked vanilla pudding & whipped cream.)

To Serve:
Spoon a generous layer of warm rice pudding over serving plate.
Spread a thin layer of prepared vanilla pudding over the rice pudding.
Top with whipped cream and sprinkle with cinnamon.
So we had an afternoon tea party a few weeks back (the girls and I) and tested the copykat rice pudding. The serving sizes were rather ample...and let's just say we didn't really need dinner that night! And since this whole rice-pudding-exercise was at Heidi's request, I thought I should pass along the recipe for her...and anyone else who might be interested.

And if it all sounds like WAY too much work, but you are craving rice pudding... 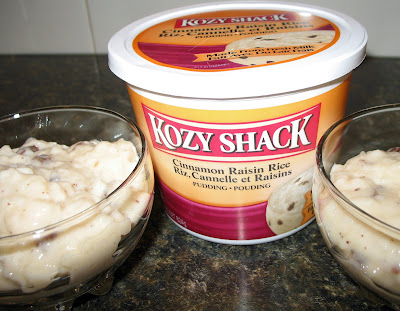 ...try the Kozy Shack rice pudding found in the dairy section of your supermarket. It is yummy...I have no problem eating the entire tub on my own! As you can tell, I'm not on a low-carb diet.

And I have a new pedometer. Thanks to cousin Lynn from Trail, B.C. for sending me to Walmart for a pedometer with security strap...made by Sportline and selling for $12.99. I bought the last one at our local Walmart...so now I plan to step it up once again.
Enjoy the day....and have some rice pudding!