My cedar chest is a treasure in itself. When I got married, my mother-in-law thought it was not quite fair that each of her daughters had a one...but her son had to do without. So I willingly accepted a cedar chest on his behalf as a gift from my dear mother-in-law. And many of the items within are treasures which were lovingly hand-made by her. The grandma slippers and everyone's favorite knit dishcloths have all but disappeared over the years...but nobody seemed too interested in the old linens. Until now that is...

Many of the items have little notes on them ( i.e. made by Grandma for Heidi during a hospital stay...March 1994). Heidi decided it was time to visit the cedar chest and reclaim all the vintage linens that were rightfully hers. I agreed...on the condition that I first take a few pictures. 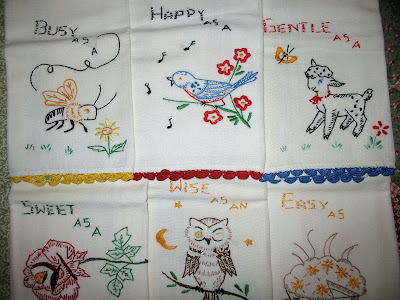 She has a set of vintage tea towels... 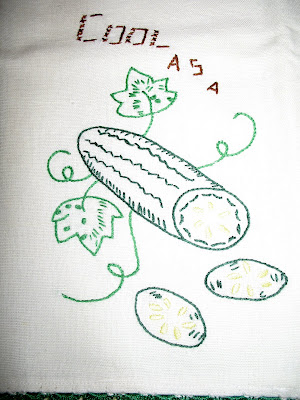 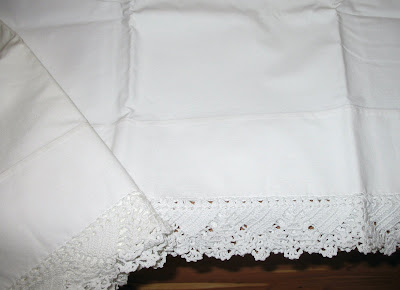 This pair of heirloom pillowcases is trimmed with lace made by great-grandma Pauline Tessman. 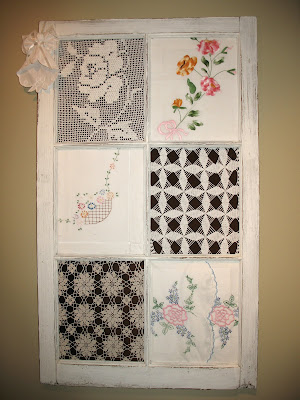 And here's a few pieces that Heidi won't be taking home anytime soon! I re-claimed a window from our old barn and used it to frame some vintage linens & lace. It hangs in an alcove where I plan to display historic family photos one day.

So here's my advice...don't listen to those who tell you to chuck out anything you haven't used in six months. If you keep it long enough...it becomes a treasure!

Email ThisBlogThis!Share to TwitterShare to FacebookShare to Pinterest
Labels: treasures