Since I have been a dismal failure at tracking my footsteps this week (I am joining forces with a bunch of gals who are determined to increase their activity level in 2008)…I will have to come up with a list of excuses once again. My pedometer went missing after several days of use. I had purchased one for hubby at the same time & his was still in the un-opened package…so I thought I would just borrow his in the meanwhile. That was well over a week ago, and I have not yet found it. I’m thinking my over-zealous cleaning crew may have discarded it along with other ‘plastic’ items in my kitchen, which had absorbed too much smoke odour! So I won’t be measuring steps anytime soon…but I’m not really sure how the pedometer counted my Saturday morning routine anyhow. 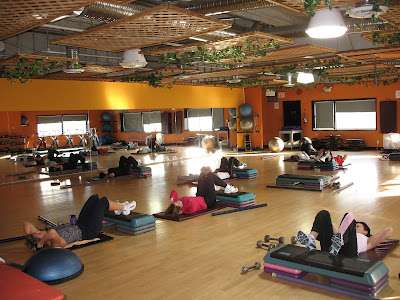 While the rest of you are cleaning your house, I join a few other gals at a local gym to take part in a ‘No Sweat’ fitness class. It’s nothing I look forward to…it’s punishment while I’m there (my daughter thinks the ‘No Sweat’ is a mis-reprsentation)…but it feels so good when it’s all over!

Enjoy your Saturday, whatever your routine…

PS Keep your woolies nearby because word has it, we're in for another six weeks of winter (it's groundhog day)!
Posted by Judy at 7:58 AM