After Kathy arrived on Tuesday, we stopped by Dad's to say 'hi'. Several hours later (once we had covered American politics, the Canadian Wheat Board and global warming...a few of his favorite topics!) he took us downstairs to show us his recently acquired family heirloom. 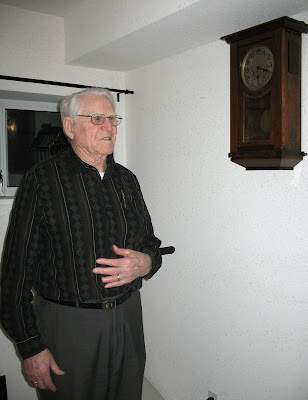 This clock has been in the family for about two-hundred years, and was brought from the old country by his grandfather. It no longer worked and could not be repaired as the parts are obsolete. Never tell my dad something can't be repaired! After building a gear or two, the clock is up on the wall and keeping TIME...how special is that? 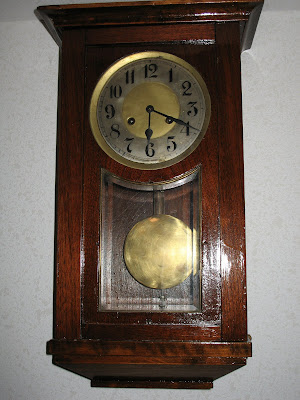 There is apparently, a long story behind this clock...but dad said he would save that one for next time! He is not known for giving the condensed version of any story, so we'll wait to hear it. As we were leaving dad's we made arrangements for him to meet us at the White Spot for supper the following night...there would be the four of us girls and our hubbys. (I was feeling a tad sad for the two American siblings who would not be at the table...but Iowa and Texas are a little too far away for afternoon jaunts!)

When we arrived at the appointed place last night we were in for quite a surprise! There to meet us was our sister Bev, from Texas (along with her son, Ricky and her friend, Paula). Hey, Southwest Air had a special which was too good to be true, so they flew to Seattle and drove up to join us. We had a wonderful supper with the whole gang...and hours later we were still there. And when it was high time for us to vacate our table...I looked up to see my brother and his wife from Iowa walking through the door. Now this was unbelievable! They haven't been here in four years, so it really is a special time. Bill and Jeanne had left Iowa in a major snow storm, and been re-routed through Texas, so they came the scenic route and arrived many hours later than planned. Mary Ellen had been in on the scheme and helped co-ordinate the whole thing...she said it has been harder to keep straight than all the figures for her company's budget which she has been slaving on for the past month! We stayed at the White Spot another hour...it was just great to be all together in one spot.

And what exactly is the occasion, you ask? That's just it...there isn't one! I think we just like surprises...and we plan to have us a special time. So if my blogging is somewhat sporadic over the next week, that's my excuse. 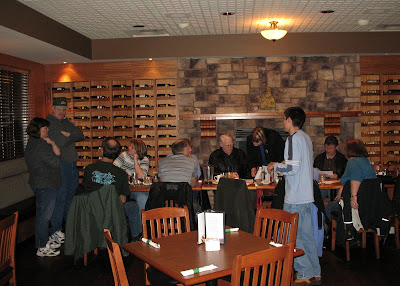 Have a wonderful day...I will!