tales from the trail...

We’re home…always a good place to be! Today I’ll just share a few tales with you…more to do with what we learned along the way…than the places we visited. Tomorrow…I’ll take you along on a road trip to Vancouver Island. 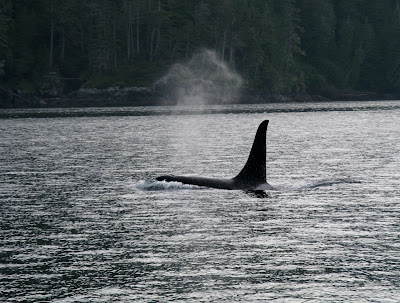 We had a wonderful time on a whale watching trip off the coast of northern Vancouver Island…with a company called Stubbs Island Whale Watching Tours. The same company also has a marine museum in Telegraph Cove…where we chatted with one of the naturalists about the difference between harbour seals, Stellar sea lions and California sea lions. We described for her…a visitor that we once had on our dairy farm. It was July first…Canada Day…some years ago...when a very lost sea lion somehow made it’s way up the Fraser River and then down ten miles of drainage ditches…to pay us a visit. Our dog wasn’t all that thrilled to see a very large (maybe 350 pounds) brown-spotted sea lion trying to get under the trickle of water dripping from the eaves troughs of the barn roof. The dog barked…the sea lion reared up…and barked right back. We called the conservation officers to come rescue the poor animal…but with it being a Canadian holiday and all…it seemed that was not an option. The sea lion stayed the night on the farm…and was still there when hubby went out to chore at 4:30 am…but by the time the conservation officers reported to work…our sea lion was gone. We were never quite sure of the exact identity of our visitor…but we now know that it was a California sea lion…by it’s bark…by it’s size…and colouring. It is rare for them to make their way that far up the Fraser River…and unheard of for them to visit the countryside of the Fraser Valley. But it is a true story…and I’m sticking to it!

While we were in Telegraph Cove…we picked up a little book about an orca whale for our granddaughter, Ranen. As we were paying for the book…the cashier wondered if we might like to have it autographed by the author… 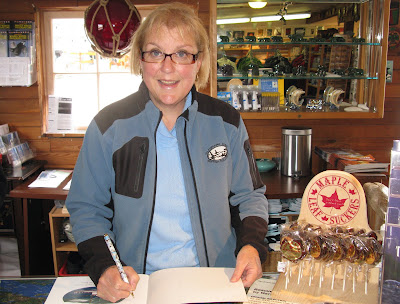 who just happened to be in the shop. How cool is that! Ranen loves books…and also happens to be somewhat of an expert on orca whales…even at her young age. Before she had her second birthday…I mistakenly called one of her bathtub toys a dolphin…and she laughed and said, “That is not a dolphin…that is an orca whale”. I stand corrected…and now know the difference between dolphins and orca whales…as well as between seals and sea lions. I am getting quite smart in my old age!
And here is a wee tale of a forest fire averted. As many of you know…British Columbia has been experiencing one of the driest summers in history. Forest fires have been raging throughout the province for several months…and everyone knows that the forests are tinder dry. There has been a total ban on campfires for more than a month…and extreme caution must be exercised when out and about enjoying nature. As we traveled…we heard countless radio ads warning of large fines for anyone caught disposing of cigarette butts improperly! One morning as we sat at our breakfast table…we watched our neighbours preparing to ‘hit the road‘. While one guy packed everything up…the other stood and watched. …and lit up a smoke…and threw the match on the kindling lying at his feet. Hubby was incensed…but bit his tongue. Once they were ready leave…the smoker threw his smouldering cigarette down on the ground…next to the match. Hubby was up and over there in a flash…before they could make their get-away. He asked them if they had any idea how dry our forests were…and suggested that maybe it was not a wise thing to be tossing out matches and cigarette butts…as he had just witnessed. The offender scrambled to retrieve the evidence…and his friend apologized on his behalf. And we wonder why there are new forest fires starting up daily! As of yesterday…the rains have arrived…a much needed boost for the fire fighters in our province.
Food always plays a big part of the vacation experience. And so it is that I have fond memories of a fried chicken picnic at the parliament buildings...fish 'n chips on a dock...and fondue overlooking Telegraph Cove. Ten years ago we traveled to Alaska with our friends from Switzerland…and had cheese fondue in the shadow of Mt. Denali (McKinley)…prepared by Pierre and Ute in true Swiss style. Although our friends weren’t with us on our adventure this summer…we thought cheese fondue would be the perfect way to end our day after our whale watching expedition. 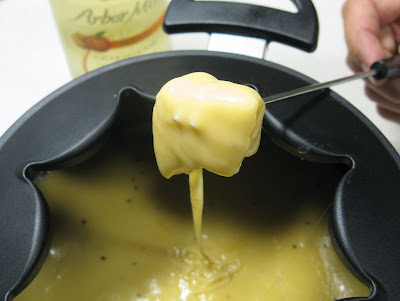 And it was! And for dessert… 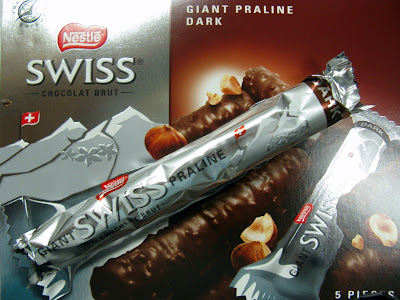 ...Swiss chocolates…thanks to a friend who sent them along for our journey.
Those are today's tidbits from our travels.
Have a great Tuesday...