White Rock, British Columbia is located about forty-five minutes from Vancouver and just five minutes from the Canada/US border. It is a quaint seaside community clustered around an eight kilometer sandy beach and the warm shallow waters of Semiahmoo Bay. There is a promenade that is two and a half kilometres in length, a train station, a long fishing pier and colourful sidewalk cafes. And they have a 'white rock'...

...of course. The large, white rock figures prominently in the legends told by the local Coast Salish native peoples...who are known as the Semiahmoo first nation. Semiahmoo is the Salish word for 'half-moon'...describing the shape of the bay. They say...no visit to White Rock is complete without a photo of yourself in front of this historic white rock. I'm not really sure why I needed to borrow my photo from Wikipedia ...as I have been to White Rock on many occasions through the years! And did I mention that the sun always shines in White Rock? They claim to have more hours of sunshine than any other city in our fair province. Doesn't it sound like the perfect destination for a camping trip with our granddaughters?

It was Emme & Spencer's turn to go camping with Grammy and Grandpa...since Ryder and Ranen had their chance earlier in the summer. So much earlier, it seems...that it was all but forgotten...and Ryder was quite determined to come along with his sisters.

We stopped by to load the girl's bikes and bags...and stood outside talking to their mom and dad while Emme and Spencer said their final good-byes to their many kitties. I saw a cat jump into the motorhome...and it was quickly expelled. Soon we were ready to hit the road...and I made one last check for stow-away cats. Sure enough...I noticed the blankets on our bed were moving...and thought a cat had burrowed in. It was then I noticed a few blonde curls peeking out... 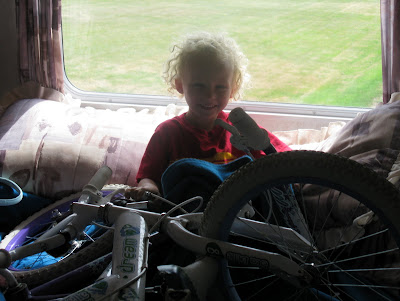 ...and I found a Ryder tucked nicely under the blankets...and beneath two bikes which were stacked on our bed. He's very good at hiding...and was quiet as a mouse...and had I not been on the lookout for cats...he may just have managed to sneak along. We left him behind and drove to a lovely RV park near White Rock....a few miles from the beach.
The girls were on their bikes in no time... 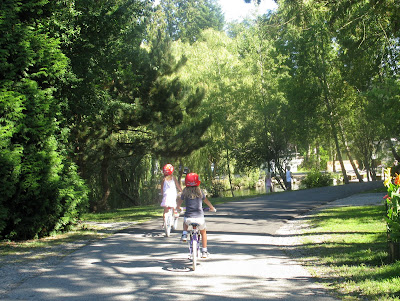 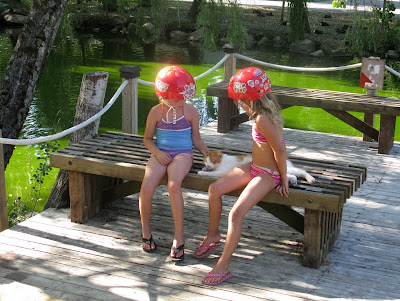 They found Marmalade on the bench right where they left him two years ago...and soon forgot about all their kitties back home. They stayed up until all hours....playing Mexican Train with us.
And in the morning...they weren't in any big hurry to get out of bed! 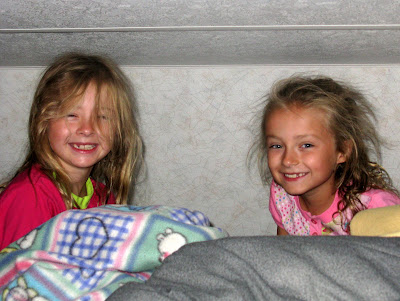 They looked out from their penthouse suite...sporting bedheads and big smiles...and wondering what was for breakfast. We were still at the breakfast table when Auntie Lisa called...she was driving out to White Rock with cousin Ranen to spend the day at the beach with us...and she had the little stowaway along!
We picked up the pace a little...and got ourselves down to the beach...planning our sand activities for the day...even lugging a wooden framework along...to assist in making the best sand castle ever.

There was just one little thing we had not thought of... 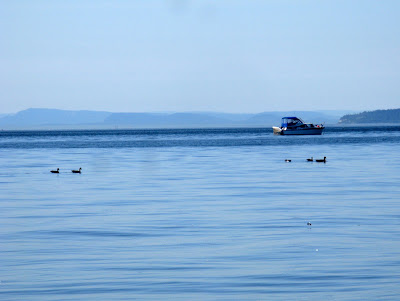 ...and that is something called 'high tide'. Why was I thinking that high tide always happened in the evening...or during the night? Where on previous visits we had dug in the sand...we found boats and geese bobbing happily on the waves. 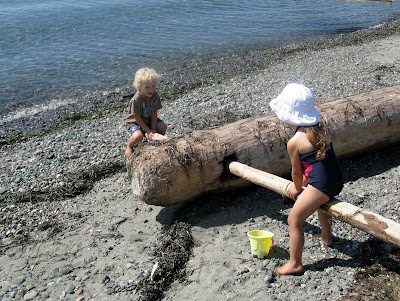 Ryder and Ranen had no idea that this beach is supposed to be miles of sand...and they found lots to amuse themselves with. Emme and Spencer were somewhat disappointed that their plans were not quite working out... 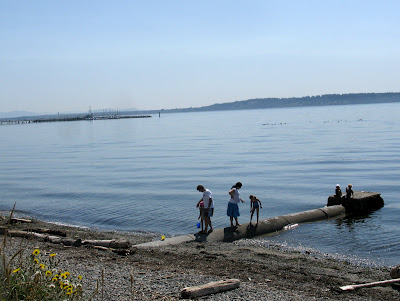 ...but soon set about collecting rocks and shells... 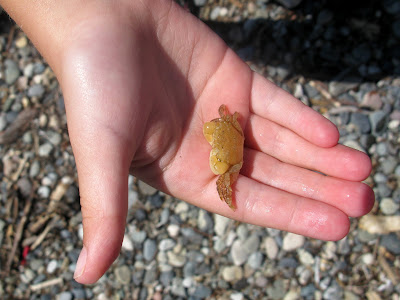 ...and finding jellyfish and crabs. 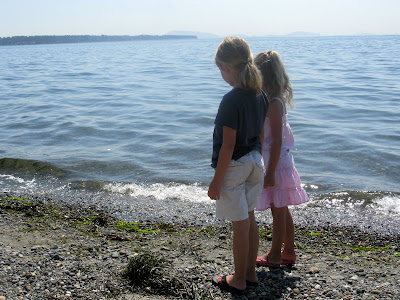 Before we left the beach for the day...the girls moved one large beached jellyfish back into the water...and set it free.

Back at the campsite... 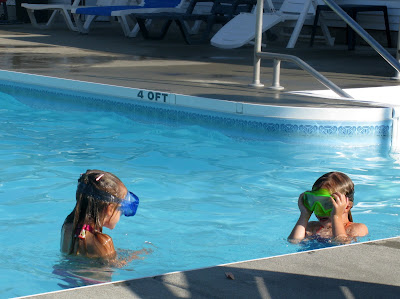 ...it was pool time. I was thinking I might just sit on the chaise lounge and watch the fun from the sidelines...but they wouldn't hear of it. And guess what? They never get cold...and never get tired! 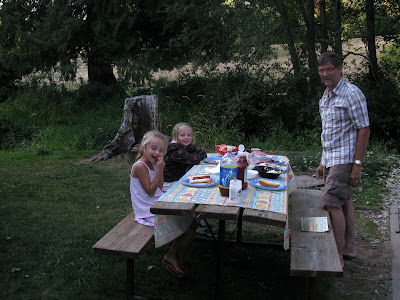 There were no complaints about the camping meals...let's just say I left anything gourmet at home. There was, however, quite the disappointment when they realized we could not have a campfire (still a total ban on campfires in a very dry province)! How would we make smores? 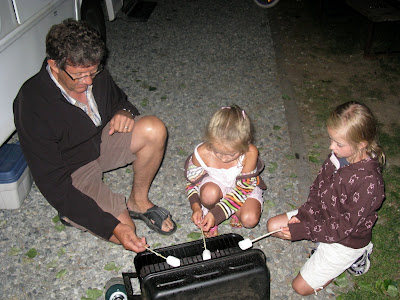 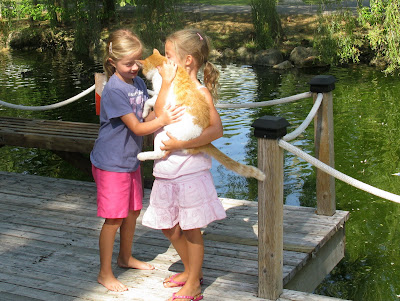 The days time passed before we knew it...and soon we were on our way home. As we were exiting the RV park...the girls begged for one more chance to say good-bye to Marmalade...and are hoping they will find him on the same bench if they ever return. 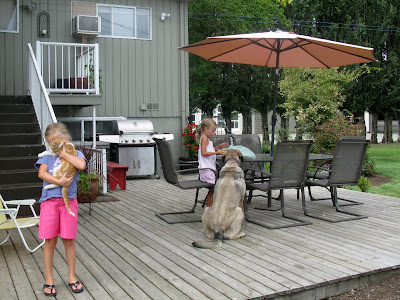 Soon they were home...and their welcoming committee came out to greet them. Bentley is patiently waiting...while Emme is opening up a 'doggie bag' with goodies just for him. What would they do without their pets?
All in all...it was a grand camping experience once again. There's always next year...to build castles in the sand!