As I was touring Alcatraz with you yesterday...and thinking of the bleak and hopeless life that was lived out by many in that desolate place...I thought of another inmate closer to home. He had never been to Alcatraz...but he has seen the inside of a good many Canadian prisons. He has also sat in my kitchen...and eaten at my table. 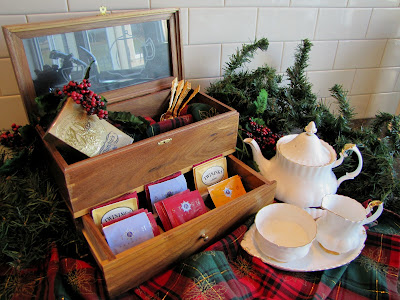 And he made me this lovely tea chest...which I treasure and have used often on a beverage table. Let me introduce Brian...we go back over a dozen years.

My husband was approached on many occasions to see if he would consider becoming involved in the M2 prison ministry (a man-to-man prison visitation program). He was on several boards and committees at that time and was busy on the farm...and really couldn't fit one more thing into his agenda. In February of 1995 we were in a serious motor vehicle accident. He spent several weeks in hospital in Vancouver...and returned home in a body cast...with lots of time to contemplate life and stare at the ceiling! Physical work would be out of the question for a long while...and it was at this time that he decided to volunteer to visit someone in prison. He was paired up with Brian...who was serving time in a medium security prison not far from here...and went to visit him on a regular basis.

As time unfolded he got to know Brian's story...not a pretty one. He was much my age...had a lousy childhood...and eased right into a life of crime. With over fifty convictions...he had spent a good part of his adult life in and out of our penitentiaries. By this stage of his life...he was totally cut off from any family...and had no friends on the outside...and so my hubby was his one and only visitor. I would on occasion go along...for a Christmas party or a special event. I liked Brian...he was easy to visit with and seemed quite harmless. Oh...and he liked to play Scrabble with me! But we really never knew if he was being honest and open...or a 'con'. For ten years, hubby visited him in different facilities...Brian was transferred from one to another and eventually checked them all out. He was up for parole a few times...and was denied. I was quite OK with that...but knew that one day he would be on the outside and then what? Hubby was his only friend. The day came...he was a free man...and he settled in our community. A 'circle of support' was set up to help him make a life on the outside...and they met with Brian on a regular basis. He came to our farm...even worked a little...met some of the family...and came to our home on several occasions. Let's just say that it was easier to visit Brian behind bars...than to be his friend once he was a free man.

After awhile, Brian was re-connected with his sister on the Canadian prairies and decided to move to be near her. A group of people stepped in to help him start a new life in a new community...wonderful people who are still supporting him to this day. We stopped by to see him on one of our treks to Manitoba...and he was so thrilled to show us his neat and tidy little house. We went out for supper...and met his sister...and left feeling he was in a good place. That was two years ago. Last week he called...and hubby had a nice chat with him. Brian just wanted to say thank-you for being his friend. He now has a job, a house, a Ford truck...and a good circle of friends. He goes to church regularly and has made a decision to live his life differently...and his life is now good.

It's the Christmas season. Maybe the best gift we can give someone is our time...and our friendship. It costs more than money...but it also has lasting rewards. Think about it.