We went last year...we returned again on Friday night...as the Canadian Pacific Holiday Train rolled into Agassiz on one of it's last stops on the 2009 tour. 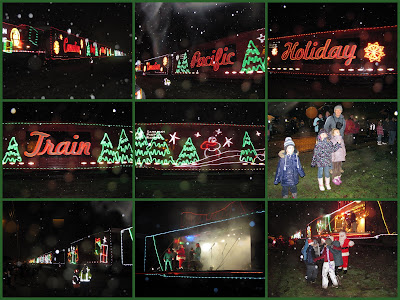 We took the grands again...by now they knew that Santa would be singing with a rock-n-roll band and joining CP in their effort to raise funds for the local food bank. In the past decade...the Holiday Train has helped raise $4 million and 2 million pounds of food for local food banks.

Since November 26 of this year...the train has stopped in more than 130 communities in eight states and six provinces. Hunger seems to be a growing problem during these tough economic times...and we applaud CP's effort to make a difference. 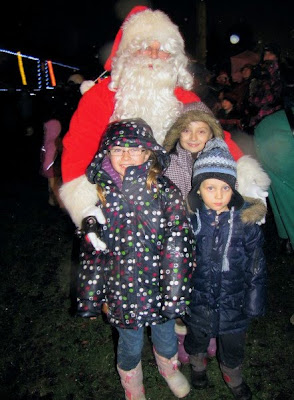 Santa came over and posed with our three troopers...and troopers they were, to stand out in the rain for the duration of the concert. I thought I might fool you with the photos...since they make it look as though the snow is falling as the train pulls into town on a pre-Christmas evening...but it wasn't quite that perfect! We all got very damp...and cold...but our hearts were warm and we went for a bite to eat later.

And before the evening ended...the grands came over to bake peppernuts...and sample a little here and a little there. They left for home with a bucket of these tasty little Christmas morsels...and visions of peppernuts dancing in their heads.

Ah...the delights of the season!