You never likely knew there was such a thing.  But I just bought one...even though it was a 'one-hand toaster' I was shopping for! 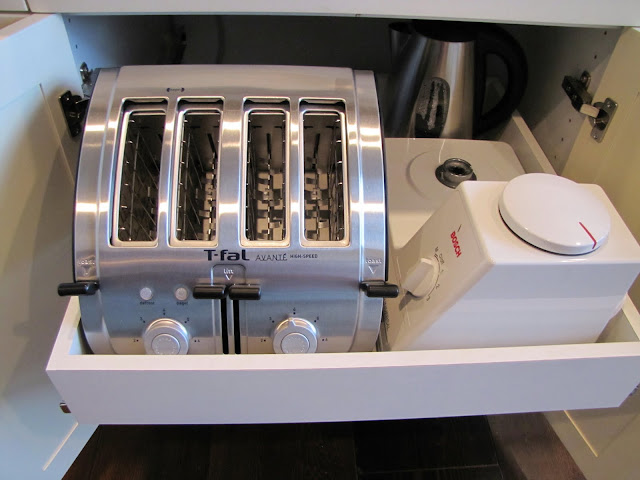 I rather like to keep the counters bare...and so I have never had appliances sitting on the counter (other than the all-important coffeemaker!).   I have an appliance cupboard with pull-outs...where I store all my small appliances.  So there is a space that is designated for the toaster...and though ours has needed replacing for a very long time (according to my kids)...I never quite found a model that would fit into the footprint of the old one.  The old four-slice toaster was light weight...and easy to whip out of the cupboard with one hand.  We have gone toaster shopping...and unpacked many a toaster...and they all failed the 'one-hand' test.  It seems four-slice toasters have become monstrosities over the past two decades!  I finally brought one of those monstrosities home yesterday...one that takes two hands to pull out of the cupboard.  The incentive was that it was 50% off.  I somehow squeezed it into it's designated spot and we used it for the first time this morning.  I have to admit that I rather like it!  It has many features...including super-wide slots...and it is very quick.

As for the old one-hand toaster...I packed it into the box that the new one came in and am saving it just in case.  I may not be able to lift the two-hand model in twenty years...and then I'll have the old reliable one-hand to fall back on.

I think I'll have to invite the kids for toast sometime soon!  They will not believe that we actually replaced our vintage model...the one they always complained about when they still lived at home.  Our youngest left home ten years ago.  Can you tell I'm not much of an impulse shopper?

Email ThisBlogThis!Share to TwitterShare to FacebookShare to Pinterest
Labels: kitchen, minutia of life