You thought I was done with postcards, right?  So did I!

But I never gave our trip home any thought at the time...and had totally forgotten that we were flying home through Chicago.  I had never set foot in Chicago before.  Now I have!  We spent a few hours there...more than we had planned on. 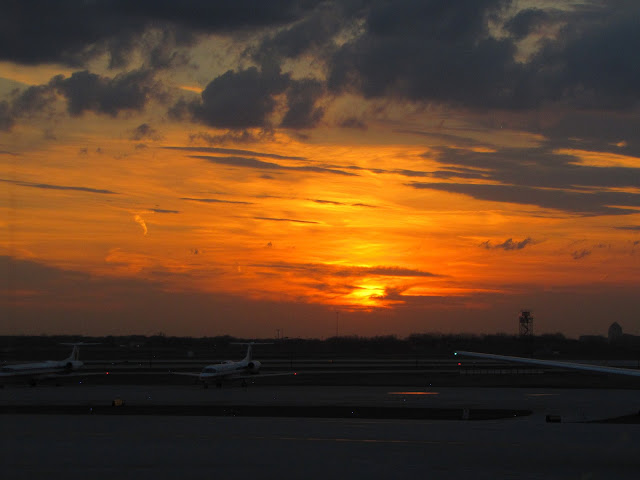 We ordered Chicago pizza and enjoyed it at a window seat while the sun set on the city.  And we watched planes coming and going. And then we grabbed our bags and ran...when we heard an announcement that our departure gate had changed.  No worries.  We had plenty of time, since the flight was delayed.  And then we sat on the tarmac for a very long time.  Why?  Because they were awaiting the delivery of the forms that we Canadians need to fill out when we return to our own country.  Hmmm.  I would think someone could have thought of that sooner.  Oh well.

We arrived safe and sound in Vancouver at midnight...where it was just above freezing and pouring rain. We called for a shuttle to take us back to our car...and waited curbside until we were chilled to the bone. I'll spare you the details...but somehow we landed up at a destination far from where our car was parked (many miles away)...and eventually had to call for another shuttle.  Several hours later...we were home.  It was good to sleep briefly in our own bed...and watch Global BC news this morning while we had coffee and toast.  It felt like home.  Did I mention that it smells like home too?  Think springtime...on a farm!

Have a terrific Tuesday!  It is Tuesday, right?

Email ThisBlogThis!Share to TwitterShare to FacebookShare to Pinterest
Labels: postcard