Gulfport is the second largest city in the state...and lies right on the shores of the Gulf of
Mexico.  It was also situated right in the path of two of the worst hurricanes ever to hit the USA.  In 1969 it bore the brunt of Hurricane Camille...which flattened most everything along the coast. In 2005 Hurricane Katrina hit Gulfport...and nearly all structures within half a mile of the coastline were destroyed and downtown streets were under water.   What is Gulfport like today?

We arrived in Gulfport on a March afternoon some seven years post Katrina...and forty-three years after Camille. 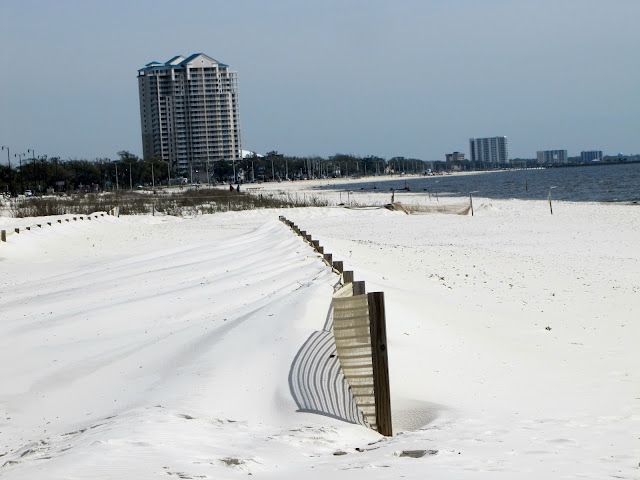 The white sand beaches stretch for miles in either direction.  All the buildings along the coastline are new. 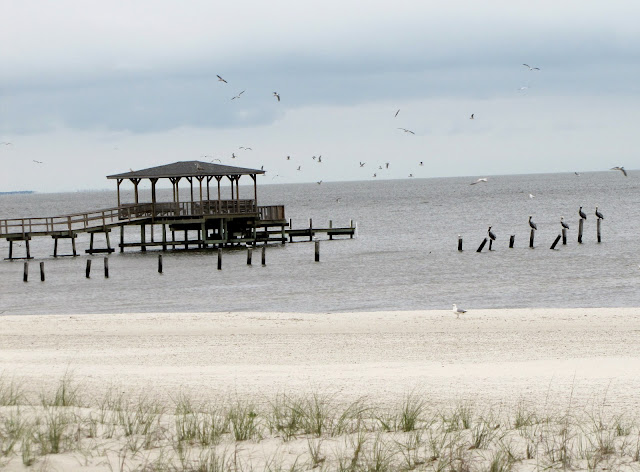 The birds frolicked and played...and had not a care in the world. 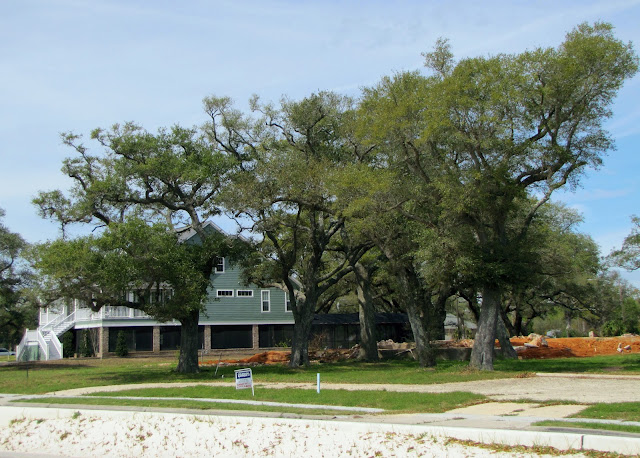 As we drove along the beach highway...we noticed many vacant lots for sale.  Often the old foundation was still there.   Homes that had been rebuilt...were up on stilts!

One of the reasons we were quite eager to visit Gulfport was that hubby spent several months here helping with the re-building process after Hurricane Camille back in 1969.  He recalled exactly how it had all looked at that time...but as we drove through the town on our arrival he never recognized any landmarks.  Gulfport was a new city!  A much larger one now.

In the morning...we did a little more exploring.  He suddenly found a neighbourhood that looked familiar.  One more block... 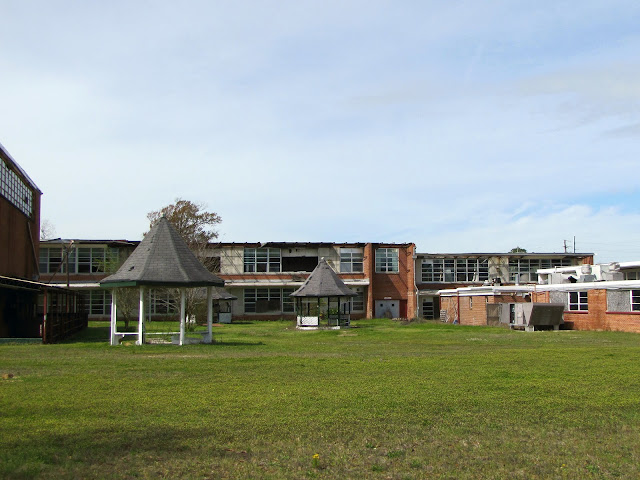 ...and there was the school that served as a dorm for all the 'relief workers' during his stay.  We parked and walked about...though the building was now behind a fence that warned against trespassing.  As we stood outside the fence and looked...a voice came over a loudspeaker asking if we needed help.  It seemed we were under surveillance! 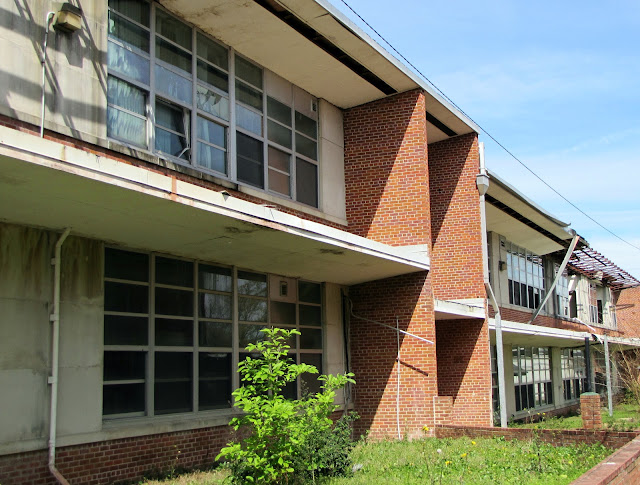 A nice lady came out to chat with us.  We learned that the building now belongs to the federal government.  It was originally known as the 33rd Avenue School and was apparently the last all-black school in America.  With the end of  segregation the school closed in 1969...just before Camille pulled through town.  It was renovated and used by Job Corps ( a federal government program) ever since...until Hurricane Katrina did irreparable damage.  The plan was to demolish the building and start over...until the 'historic preservation' committee got wind of that plan.  They would like to see it rebuilt and preserved as an historic African American high school.  While the fate of the old school is still in limbo...we stood outside it's gates and viewed the building that looked just as it did some four decades ago. 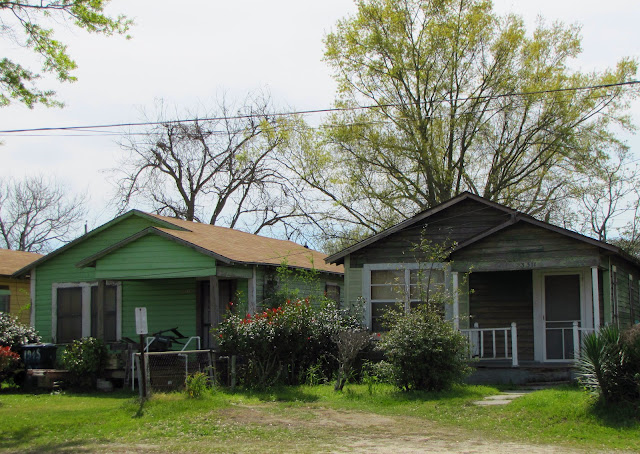 Across the street were the homes that he recalled...homes that all had to be placed back on their foundations in 1969.  It was definitely a trip down memory lane for him!
We returned to the beach...a short distance away. 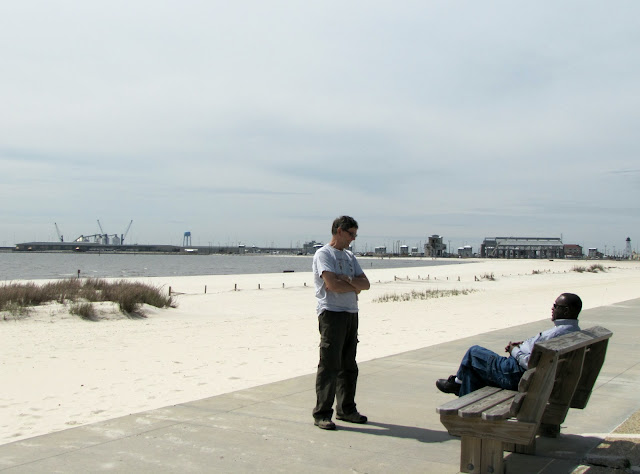 It's always fun to talk to the locals.  You learn a lot!  We learned that although the winds were stronger with Camille (category 5)...Katrina did more damage because of the storm surge.  Many locals left for higher ground after Katrina...and have not returned. 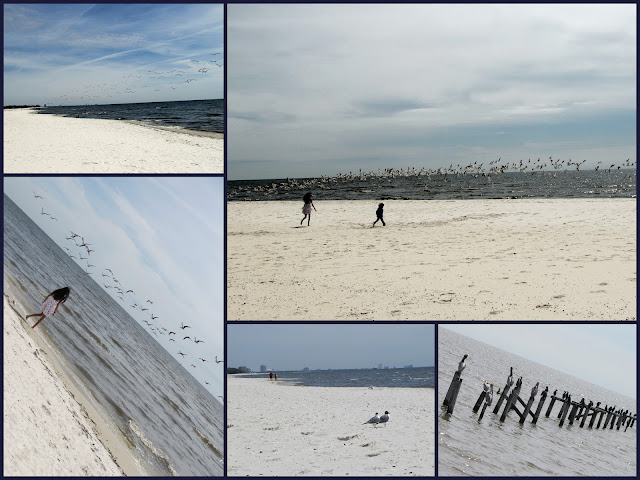 At the beach it doesn't look like much has changed after all!  The tide comes and goes just as it always has.  The children run and play in the white sand.  The birds take their roll call. This is the Gulfport I will remember.