Thirty-seven years is a long time to be married to someone...we thought we should celebrate with some fireworks!

(picture source)
We were just kids thirty-seven years ago...and now we are Grammy and Grandpa. We've been through so much together...both good and bad. We've learned a lot of life-lessons over the years...some the hard way. If we had to do it all over again, we would do some things differently...but we would still do it together!
But here's the thing...we like where we are at now! We'd never want to start all over again. And we are so thankful for God's faithfulness to us over all these years. Every anniversary is a time for celebration...a time to remember the blessings of another year together.
What has July 31st looked like over these many years? I've kept a journal of our anniversary celebrations throughout the years...and now I have written chapter thirty-seven.
We were in Victoria for our honeymoon...and have been back to Vancouver Island to celebrate our anniversary on several occasions. Many years we would go out for a special dinner, sometimes while on vacation...once we had fresh Pacific salmon in Alaska and another time we ate at Outback Steakhouse in Cheyenne, Wyoming. Other years we took in a musical production...My Fair Lady in 2002 and Mamma Mia the following year. Several times we were at family reunions on our anniversary date...once at the 108 Mile Ranch and another time in Pinawa, Manitoba. Some years the circumstances of life were such that we had other things to focus on, and the anniversary was all but forgotten...eight years ago we buried my mom on July 31st. One of our most memorable anniversaries, was the year we packed up a gourmet picnic and took the four-wheel drive truck up a remote logging road on the west side of Harrison Lake. We sat on a log next to the turquoise waters of the glacial lake...and enjoyed a feast unlike any we could have had in a restauraunt.
So what exactly did I write in Chapter Thirty-Seven?
Every summer since 1990, Vancouver has been the host to a spectacular international fireworks competition...called the HSBC Celebration of Light. The event takes place over several evenings...with a different country hosting the fireworks display each night. It is the biggest event to hit the city every summer...and 1.4 million people flock to English Bay to watch this amazing event. We had not been to see the fireworks in years, so decided to mark our anniversary with a 'celebration of lights' this year. Since getting out of the city after the event can sometimes be a problem...and because the fireworks were actually the day before our anniversary...we spent the night in town. 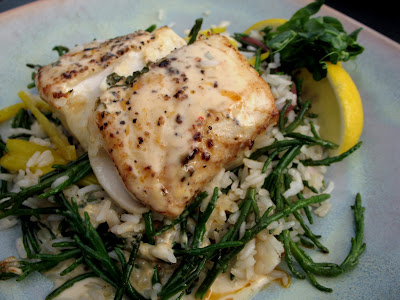 First we had dinner at a quaint little seafood place near the water...my dinner of fresh halibut with coconut-lime sauce, served with rice and sea asparagus was simply the best.
By 8:30 we took our lawn chairs and went in search of the perfect spot along the waterfront at Dundarave Pier...in West Vancouver. 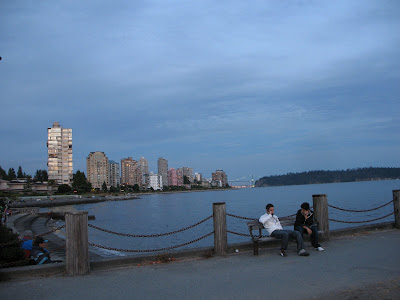 The beach was still rather deserted when we got there...but soon the crowds began to arrive. 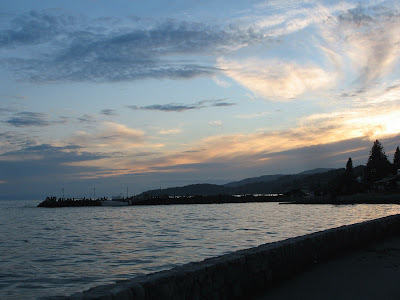 At ten o'clock the sky above Vancouver came alive! China put on a fantastic display...I can't even imagine that the Grand Finale on Saturday night can top what we saw. (British Columbia is having it's 150th Birthday Celebration this weekend...and Saturday's fireworks are part of the party.)

We spent the night at an RV Park in West Vancouver. In the morning...under rather grey and drizzly skies... 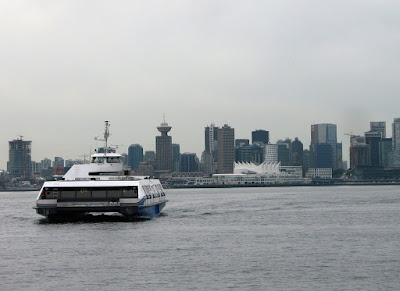 ...we took the seabus across the harbour into the downtown area. 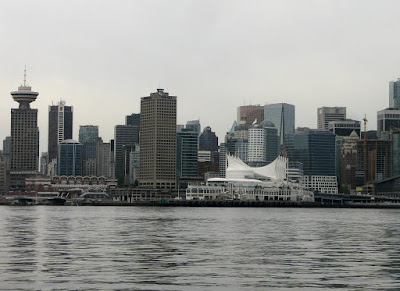 If you ever visit Vancouver while on a cruise, this is exactly where you would dock. The building that resembles the sails of a ship is Canada Place...and was a trademark of Expo '86. It also houses the World Trade Centre offices. 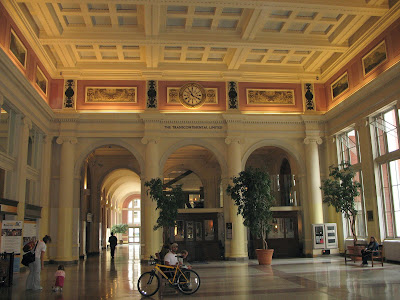 Once we disembarked from the seabus, we entered the city through this magnificent old building, which was once the Canadian Pacific Railway Station in Vancouver.

We strolled about the port of Vancouver for a bit, where there is much construction happening at the moment... 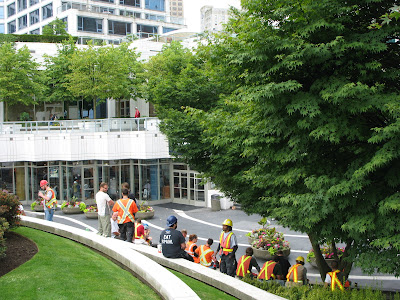 ...and passed by a group of workers who were taking a break. 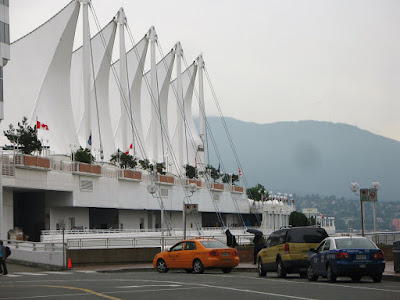 It was drizzly and cool...and soon time to set sail for home.

And that is how we celebrated 37 years of wedded bliss! Thanks to all of you who left your best wishes...some of you were actually there for the wedding celebration on that day so long ago.