August 2nd...was my grandmother's birthday! Although it's been years since we celebrated the occasion with her, I always think of her on this date. It's the little things I remember...like shelling peas together. She loved to sing the old hymns and would on occasion get out her song book and want us to sing along. She was from a time and place where being thin was not a good thing...and she felt quite sorry for me as a child (thought I needed a little more padding!).

I have a few treasures from my grandmother...one being a German Bible. The other is her old Singer sewing machine...which sat for many years in an out-building on an uncle's farm in the prairies. It now sits proudly in my front entry...the thimbles, thread and buttons still in the drawers. In one drawer were two envelopes with seeds she had collected...envelopes from 1957. This year I decided to give those seeds my very best effort...and hopefully they would produce some heritage plants. I used potting soil and sowed the seeds in a small planter late in spring. I was so excited to see a few teeny green sprouts...and watered them faithfully. I had about half a dozen healthy young plants...but one day I realized they were shaped suspiciously like the weeds I was pulling out of my adjacent garden bed. What a disappointment! My hope had been to grow a few of grandma's flowers...save oodles of seeds...and share the seeds with all my sisters and cousins...anyone who wanted some. It was not to be...so instead I will share a few memories. 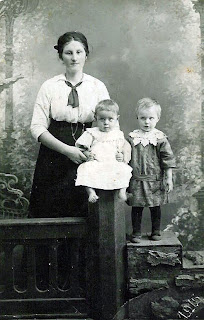 ...with her two oldest children

My grandmother, Susanna Penner was born on August 2, 1893 in Rosenthal, Ukraine to Peter and Helena Penner, the eighth daughter in the family. She wrote up a few things about her life as she neared her final days...and I'll include a short excerpt.

In year 1900 I began my studies in the village school. After five years at the village school, I was able to enter the girl’s school in Chortitza. I attended this school for four years and then received placement as a teacher. Because I was only sixteen years old upon graduating, I was too young to teach. I spent one year at home with my parents, and then spent two years as a schoolteacher in Grigorjewka.

Here at Gregorjewka I met my husband, Johann Baerg. His father, Jacob Baerg, was the village preacher. I was baptized in Chortitza and on September 9, 1912 was our wedding day. The scripture chosen as the theme for our marriage was Romans 12:12... Be joyful in hope, patient in affliction, faithful in prayer. This verse was our theme through life!

This was a nice, peaceful time in Russia and we lived together, happy and content...but not for long! Two years later the first world war began, and my husband was called to serve while I stayed at home alone with two small children. He was away for two years before the war ended and the Russian Revolution began. That was much worse than the war. The White Army took all the young men from our village with them, chasing them out to the Caucausus and from there by ship to the Crimea. A few managed to hide and escape halfway through this journey. From these deserters I was able to learn that my husband had been sent to the Crimea. When my husband had been away for seven months, I gave birth to another son (my fourth child) whose name was Jacob. When Jacob was one year old, his father returned home, sick, weak and on crutches. What a celebration! This was August of 1921.

In 1926 we immigrated from Russia, leaving behind our beloved home in Gregorjewka. Because we had trachoma, we were sent to Mexico rather than straight to Canada. Our journey to Canada took us eight months, since we had to wait for our Canadian Immigration papers once we arrived in Mexico. We finally arrived in Winnipeg, and....then eventually to a farm in McCreary, Manitoba where we lived for twenty years. It was here that we raised our twelve children (nine sons and three daughters); only the youngest daughter was born in McCreary. We really enjoyed life there. In 1956 we moved to British Columbia...where I am still living.

And so it was with us. The first in the family to pass away was my husband. He was 77 years old; he passed away in March, 1964. The Lord allows these sorrows, but also helps us to bear the pain…therefore I love the Lord!

I may not have seeds from my grandmother to pass along...but I thought I would share some memories on her birthday...and a few of the words she penned, which are a testimony to me of her unwavering trust in God.