the prettiest little ballpark in the world...

Nat Bailey Stadium...also known as "the prettiest little ballpark in the world"...is home to the Vancouver Canadians of the Northwest League. It was built in 1951, and has been the centre of baseball in Vancouver ever since. It is named after renowned baseball promoter and the founder of the legendary B.C. restaurant chain, known as the White Spot....and is affectionately called 'the Nat'. It sits immediately next to Queen Elizabeth Park...a beautiful backdrop for an outdoor stadium. 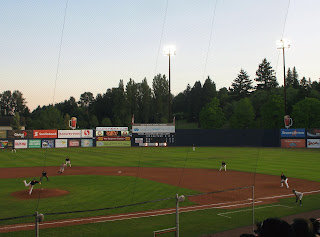 On Saturday the temperatures climbed to the high 30's (Celsius)...and it was the perfect day to head to the city for an evening ballgame. We took three vans of avid fans (and one-night fans) out to the Nat for the evening...and we definitely got our money's worth! 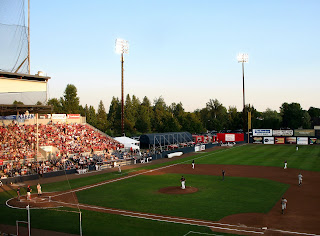 The game began at seven...and at eleven o'clock it was still happening. Our peanuts were long gone...as were the drinks...but the game went on. The visiting team was three runs ahead at the bottom of the ninth inning, so the game was all but over...until a wonderful young player came up to bat with bases loaded, and did what most can only dream about. He hit a beautiful grand slam home run... 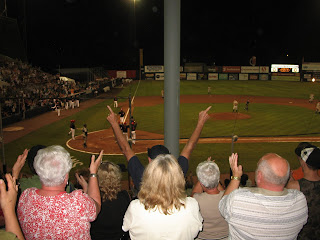 ...and brought the crowds in the stands were to their feet.

Since the home run ball scaled the wall immediately next to one of the A&W targets, every fan received a voucher for a free A & W teen burger and root beer. Jeremy Barfield was one popular young player on Saturday night...he is the nineteen year-old son of former Toronto Blue Jay's star Jesse Barfield.

So with a tied game...we went into the tenth inning. New pitchers came in and warmed up, and it was beginning to look like the game may just go on forever. But the hometown boys just couldn't quite pull it off, despite a wonderful effort.

When the game was over, one would think we would be in quite a hurry to get back on that freeway for the long commute home. But we couldn't just leave, since we had chosen to visit Nat Bailey Stadium on a night that featured fireworks after the game. The fireworks were wonderful... 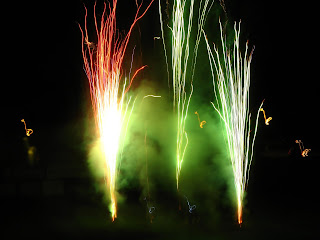 ...and although I discovered I have a fireworks setting on my camera, you had to be there to appreciate them!

So it was after midnight by the time we left the city...too late to stop by Tim Horton's for a cup of coffee. I'm not usually out and about at that hour...but was surprised by all the people who are! Where are all those vehicles going at that hour of the night? Sunday morning came rather too soon...needless to say, yesterday was a day of rest! 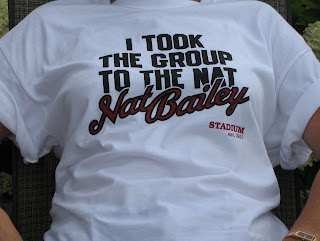 Since I helped organize the group outing to Nat Bailey Stadium, I was given this lovely T-shirt...it is rather on the large side, but I'm sure I will find a use for it. I was also given two tickets to any upcoming Vancouver Canadians game...so if you want to visit Nat Bailey Stadium firsthand, let me know.

If you go, just be sure to pick the warmest night of the summer...with a full moon hanging over stadium. And go in good company...it makes those innings fly by! It was a fun evening...at the prettiest little ballpark in the world.