I'm up early today...on this our province's 150th birthday. I even caught the sunrise this morning...and noticed the layer of white fog hanging around the valley...and the thick blanket of dew out there. It's beginning to feel a wee bit like fall...summer always slips away far too quickly. 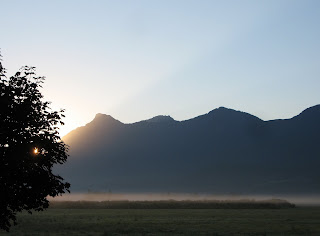 There have been a lot of celebrations throughout the province this weekend....in honour of B.C.'s 150th anniversary. Here's a bit of history...

In 1849, the colony of Vancouver Island was established with Victoria as its capital. On Aug. 2, 1858, the English Parliament expanded that to the mainland with "An Act to Provide for the Government of British Columbia". It's a great province...and a wonderful place to live!

We had our own little celebration with friends last night... 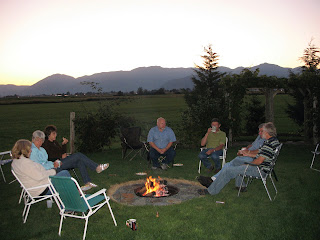 ...not so much about our province's birthday...but more about friendship, and summertime, and roasting hot dogs and smores on an open fire. 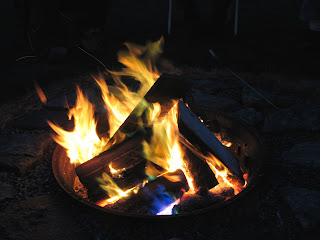 There's nothing quite like visiting around a fire...and watching the dancing purple, green and blue flames! We were quite intrigued by the colourful bonfire we sat around while in Manitoba a few weeks back, and discovered a product called 'Campfire FX' which produces the most colourful flames. We brought back a few packages to sample...and are quite enjoying the campfires, which put on a brilliant display for up to 30 minutes.

Today I'm opting to spend the day at the beach with three enthusiastic children...while back on the farm the guys are mowing hay. Have a wonderful holiday Monday...wherever you are!