Rain...great for putting out fires...not so good for our annual Santa Parade. We all made the best of it...umbrella's decked out in Christmas lights look quite festive! 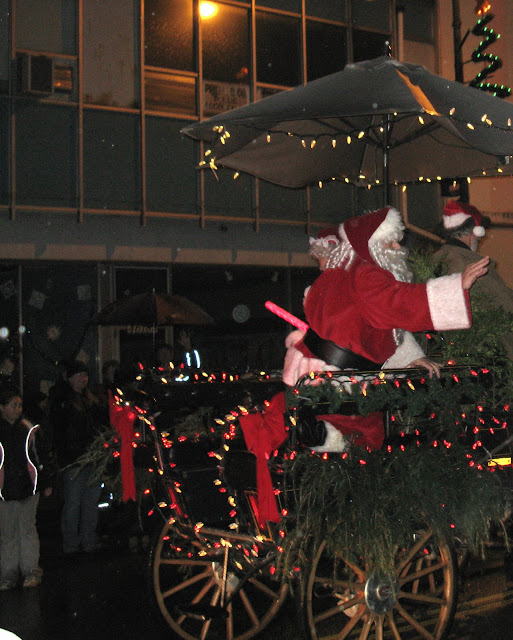 Our city hosts an annual 'parade of lights and sounds' on the first Saturday night of December. It holds much more appeal when one has grandkids who are most enthused about it...and so we have made it an annual family outing. Last year was very cold (by west coast standards), but Saturday promised to be wet... 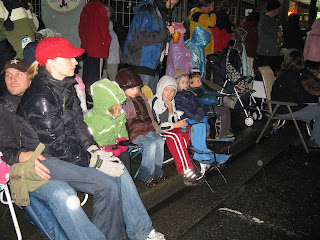 ...and it was! We went early to get front row seats...and were soaked before the parade even began. The hot chocolate helped keep us warm for awhile...and no amount of 'cold & wet' could dampen the enthusiasm of the kids. And who was this kind fireman...handing out candy canes? 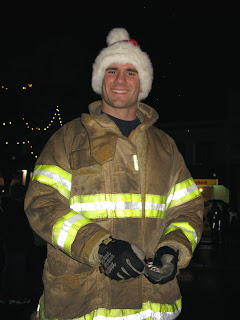 Why...it was my nephew Eric! From fighting fires to working the parade...he had a busy weekend. Forty firefighters from five firehalls spent a good part of Friday battling a blaze a Unifeed...the only feed mill in our town. It seems there was extensive damage to a dryer...but with the aid of the firefighters, a good sprinkler system (and maybe even the rain?) the mill will be back in operation before long. The parade was excellent...maybe a tad long for standing in the rain. At long last, Santa rode his sleigh through town...and we could all go home, where it was warm and dry!

Have a wonderful Monday...