something old ~ something new...

We all needed a diversion from election talk and hockey...and so the royal wedding came just at the right time!  Some thirty years ago...I got up in the middle of the night to watch the wedding of Charles and Diana.  Today I will brew my cup of coffee tea...toast my English muffin...and enjoy it all from my best Royal Albert fine china while I watch the wedding that was PVR'd hours ago.  I love that technology!

As for the wedding venue... 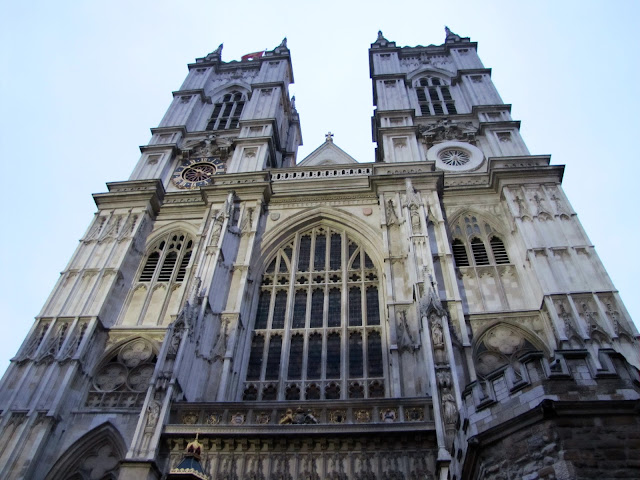 ...we checked it out a few months ago...and gave it our approval.  It is definitely something old! Westminster Abbey is a fine old cathedral...which has seen the coronation of 38 kings and queens since 1066, when William the Conqueror became the first monarch to be crowned here.  It is also the final resting place for 17 monarchs.  It remains a place of worship...with daily prayers and special services held throughout the year.  I'm sure today's wedding will be among the most special!

In keeping with the wedding theme...I'm sharing a wee bit about wedding rings over here.  Hubby's wedding ring took a lot of abuse in those early years...and was sent away to be 'reinforced' several times.  The once etched top was worn to a shiny surface...and after thirty years I decided he should have a new wedding band.  The original was nicely stored...as a memento of our vows in 1971.  Last summer on our road trip through Montana, we went mining at Gem Mountain near Philipsburg.  We had great fun...and came away with two sparkly blue sapphires.  I packed them away and recently took them to a goldsmith...to see what could be done with them.  We decided the round one would be perfect set in the center of hubby's original wedding band.  I asked the goldsmith what he would suggest I do with the other sapphire.  He looked at the plain gold band that I was wearing on my thumb...and suggested he would put it on that band.  Why not?  Then we would each have our own sapphire ring.  So for the past few weeks... 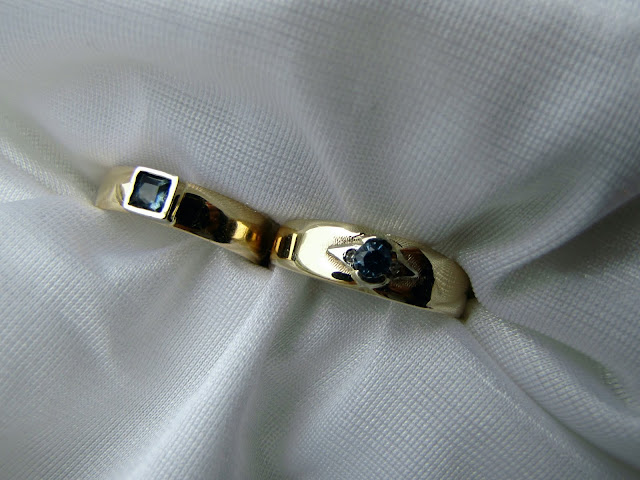 ...we have been wearing our new old rings.  My new old ring was once my mother-in-law's wedding band...and I have worn it since she passed on.  So now...like Princess Kate... I wear my husband's mother's sapphire ring.  I'm sure she never found her rock in Montana though!

Before you rush away...be sure to stop by MGCC where we are serving up Royal Chocolate Biscuit Cake... 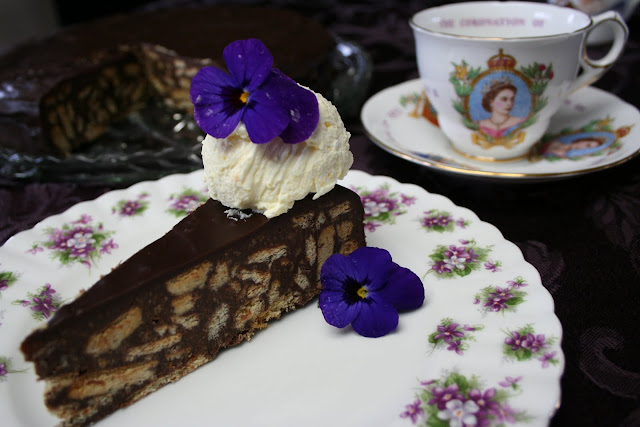 ...in honour of the marriage of Prince William and Kate.

Enjoy the day...the pomp and ceremony...and the royal treatment.  Tomorrow..it's back to hockey and politics!