Once the others had left for home we got down to the serious business of camping with Emme and Spencer. 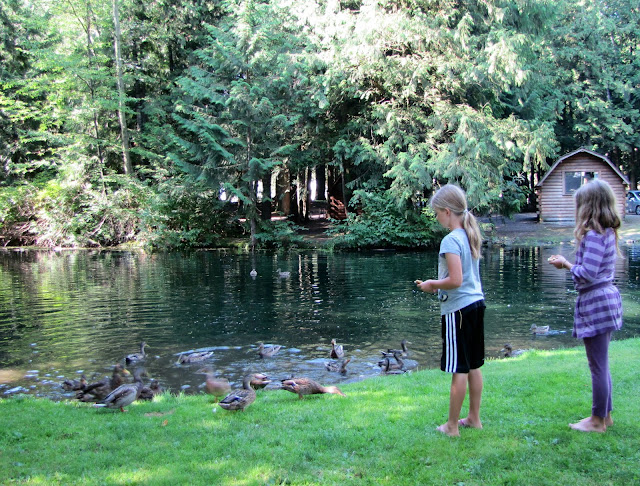 But first we needed ice-cream cones...also a camping tradition with these two! 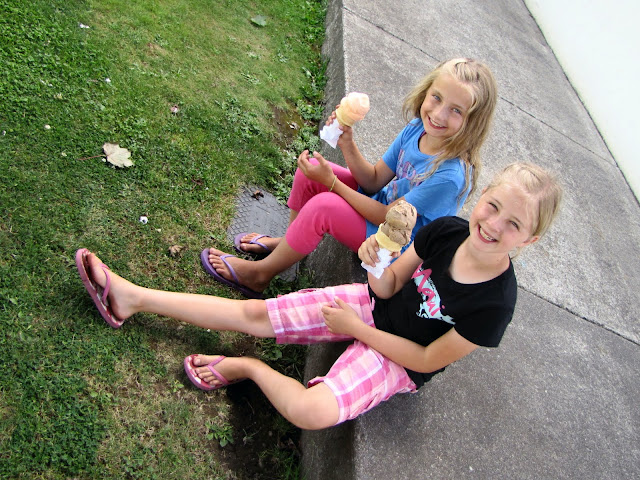 We arrived at Edaleen Dairy the same time as a busload of seniors coming to enjoy a lick of their own. Now I never send anyone south of the border to buy dairy products (smile)...but if you happen to be in the area...you really should check out their ice-cream.  Good to the last lick!

In years gone by...we made the plans and the girls fell in line.  This time was different!  They came with plans of their own...and informed us that they had an after-dinner surprise for us that first night. 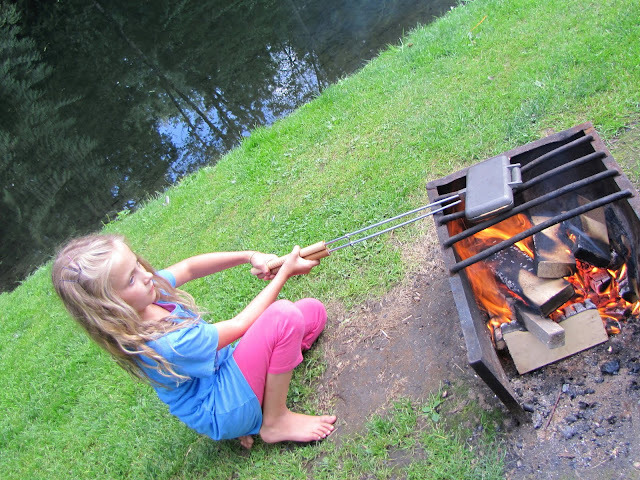 We cooked up some bush pies as the sun was setting...and then settled in to enjoy their surprise.  We sat in our appointed chairs facing the stage and waited.  And then we laughed...a lot!  They put on a fashion show for us...modeling  lot of outfits that looked very familiar.  Many were dresses that I had once sewn for them...and they somehow managed to squeeze into.  They threatened to flee if I pulled the camera out for many of their 'numbers'...but did let me take a few pictures. 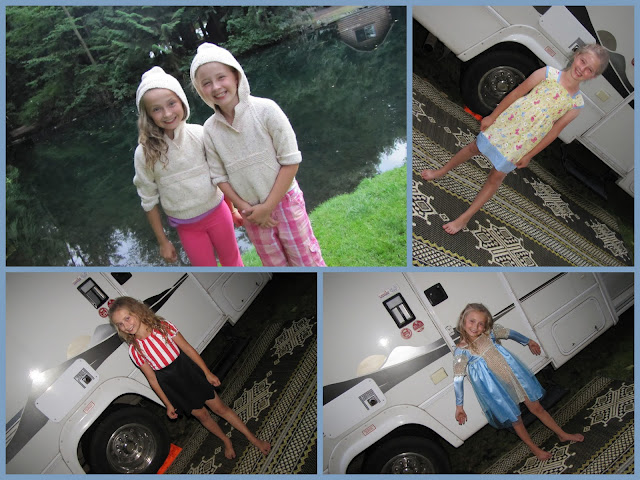 The sweaters they modeled were baby gifts for them from Great Aunt Nellie...and worn for professional photos they had taken at age two.  I think they still look smashing in them all these years later!  Most all the outfits that showed up on stage were from their preschool years.  I'm so glad they took their show on the road...it was great camping entertainment! 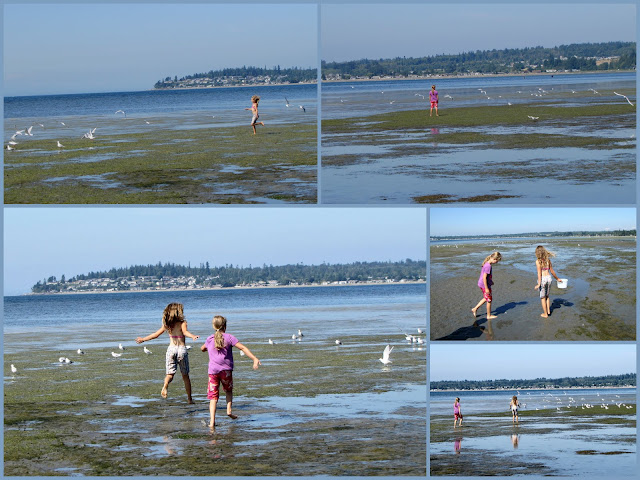 We spent the next day at the beach...Birch Bay.  After finding our perfect spot on the beach...and leaving our lunch on a blanket...the girls set about chasing away all the sea gulls.  It was hard to forget what happened last year...when the sea gulls enjoyed our lunch while we beach combed. 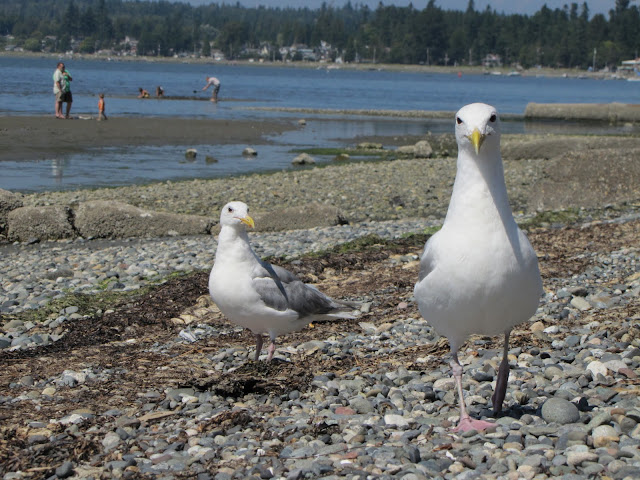 They had no luck this year...though the girls shared a few crumbs once lunch was done!

We noticed that things have changed from earlier camping trips with these two.  They are much more independent these days... 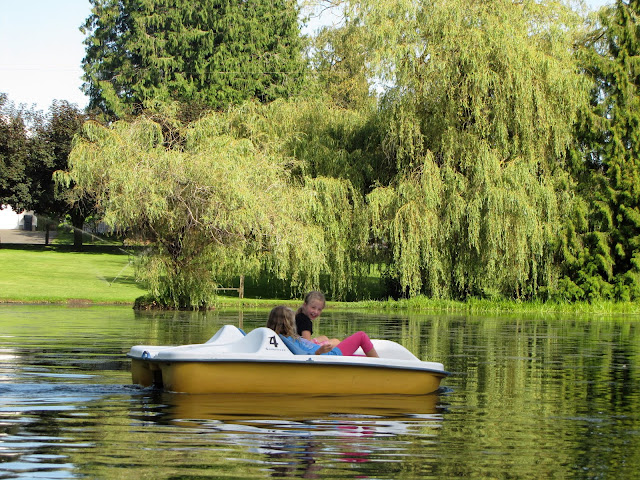 ...and for the first time, they took the paddle boats out on their own.  They also let me sit on the sidelines at the pool while they swam, though that was a bit of a debate!  And they played tennis for the first time...and did great.  And did I mention that they sleep in nowadays?  Their camping days only began at 9 am!

We had a good time with our two 'happy campers'.  When I watch those two together...I think how nice it would be if we all had a twin!

When our camping adventure came to an end...we left for Canada, where we belong.  And riding in the back of th RV...were two girls singing along to the Beach Boys and laughing (as they have done on every return trip from camping). 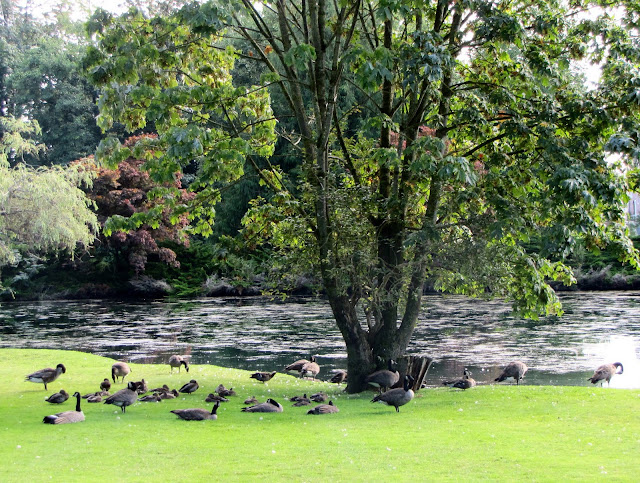 We noticed that not all Canadians were returning home.  These seem to have taken up permanent residence at the Kampgrounds of America in Lynden!  We may just meet again one day...same place.