We all know Johnny Cash could really hit those low notes...and I still love to listen to him sing some of those oldie/goldies. But here's what you likely didn't know...I have my own 'Johnny'. Yup...he can reach those low notes as well! I just don't hear him singing nearly as often as in years gone by.

Some of my earliest memories of my hubby go back to the church choir that we once sang in. He sang tenor back in those days...and a good tenor at that. After high school graduation...he went away to school one winter...and discovered he was actually a bass. I'll never forget when he returned...and showed up at choir practise with full intentions of singing bass. Our choir director asked him to please sit with the tenors...but he replied it was bass or nothing. He held his ground...and has been singing bass ever since.

Here's a quartet pic I found in the files from some 37 years ago (hubby on the right)... 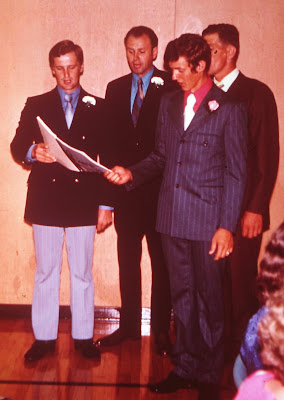 ...and the funny thing is that same quartet is still called on to sing every so often. (The original baritone's son now sings in his place...and the first tenor has been replaced as well.) They jokingly call themselves the 'funeral quartet'...since they mostly sing at funerals!
Last night, however, they were asked to sing at a non-funeral event......and jumped at the opportunity. 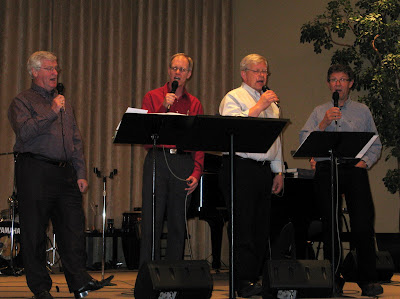 If you look closely...you will may even find two guys that bear a slight resemblance to two on the top photo (extreme left...and extreme right).

The crowd was most enthusiastic...and some wondered if they'd be putting out an album soon! (Did I tell you most everyone there was over 50...and well beyond?)

Choirs and quartets seem to be a thing of the past...but it's good to hear the OLD quartet blending their voices once in awhile. I like hearing 'daddy sing bass'...well, I guess he's grandpa now!

Daddy sang bass, mama sang tenor
Me and little brother would join right in there
Singin’ seems to help a troubled soul
One of these days and it won’t be long
I’ll re- join them in a song
I’m gonna join the family circle at the throne.

It's Monday...have a good one!

Email ThisBlogThis!Share to TwitterShare to FacebookShare to Pinterest
Labels: music