It was a long weekend, for sure...and so many things have happened since I last posted. Easter has been well-celebrated over here...at church, at home and even at the hospital.

As I mentioned some time ago, my dad was unable to join us on our family cruise since he came down with pneumonia shortly before we were to leave. We were hoping that he would have fully recovered by the time we returned...but that was not the case, and just before the Easter weekend, he was readmitted to hospital where he is being treated once more for pneumonia. I was thinking I would bring him a few goodies for Easter...and what would make a more appropriate Easter basket for a hospital patient than one of the hospital kidney trays? I'm not sure he saw the humour in that...but I think the staff will! 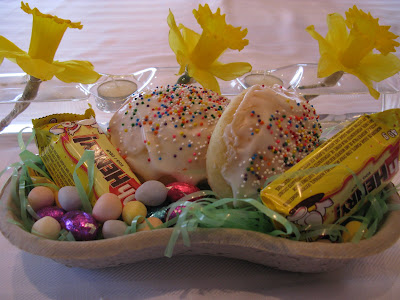 We were up to visit him last night...and thought he looked somewhat better. He was even up to telling stories...but then...when isn't he?

We enjoyed a wonderful Easter service yesterday morning...complete with a children's choir and worship led by my nephew, Jamison. After church, the gang came over for our traditional Easter dinner...followed by an Easter egg hunt. While we were getting the last of the food on the table... 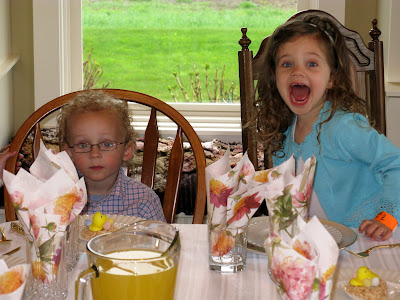 ...Ryder and Ranen found their spots and were waiting...not too patiently. It seemed Ranen's Daddy had been tied up...and had not yet arrived when we were ready to eat. Lisa decided we should start without him...as the kids were hungry.

The meal was over...the grands were off playing...and we were enjoying coffee, when Jeremy managed to get hold of Kris by phone. We heard him telling his brother to hurry up...as we were all tired of waiting and rather hungry. The minute he was off the phone...he decided we would re-set the table and pretend that we were all waiting for Kris to arrive so we could eat. I thought that rather absurd, since the dishes were all dirty...but the rest of the family over-ruled, and started running! Tim and Jeremy quickly washed and dried all the dishes...everyone helped re-set the table...and before you know it, we were ready for Easter-dinner-round-two! Emme and Spencer thought it was hilarious...Ryder and Ranen had to come back to the table...and by the time Kris arrived at the door, the play was ready to begin! Ryder called out, "Uncle Kris, I'm starved!" He quickly took his place...and we started Easter dinner...for the second time. The funny thing was that Kris never seemed to notice that he was the only one dishing out food...as the platters got passed around the table. It was only when Ranen finally told him she had already eaten, that he looked around and noticed he was on his own! 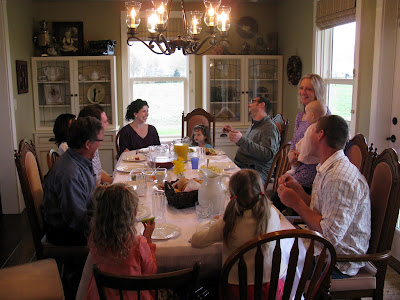 We all had a good laugh...the kids went back to playing...and the hastily washed dishes were put in the dishwasher for a little further sanitation.

When things don't go as planned...we go with Plan B. The Easter bunny had made arrangements for an afternoon Easter egg hunt...in a nearby lovely secluded garden. The Easter bunny, however, had not been watching the weather forecast...and there was no thought of hiding eggs outside as the skies opened and rains poured down! It was decided that our upstairs had many nooks and crannies...and would be the next best place for hiding eggs. Ryder and Ranen were banished to our bedroom...while the goodies were being hidden. It sounded like they were having way too much fun in there...so I thought I better check up on them. 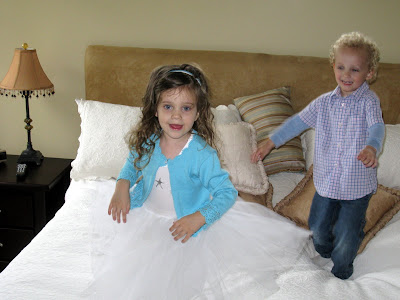 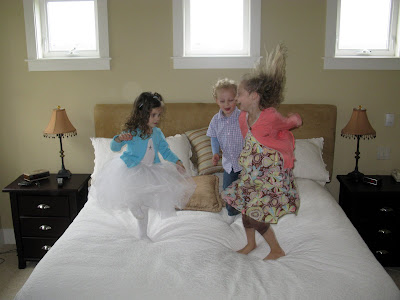 ...and it was even more fun when Emme got in on the action! 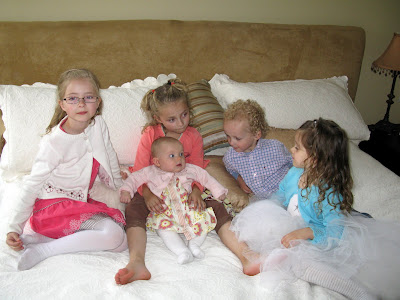 Although Baby Maelyn rather likes jumping as well...we thought it best they settle down for a bit.

Looking for eggs in bookshelves and under beds is not quite the same as finding them behind rocks and among grasses...but the grands had a fun time and didn't seem to mind one bit that it was raining outside! 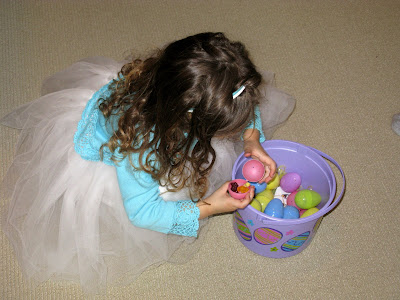 What fun they had digging through their treasures! 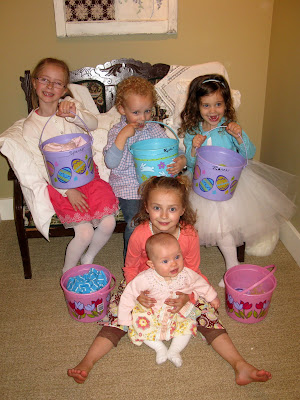 Last year, Emme and Spencer opened a candy store on Easter Monday...and called Grammy to come shopping. I wonder what they are up to today? 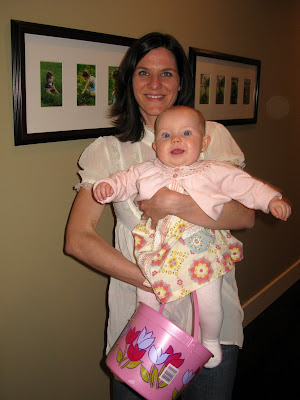 Baby Maelyn didn't care much about the eggs...or the candies...but she sure loved to watch her cousins having fun. She also decided that she had done enough lying around at family gatherings... 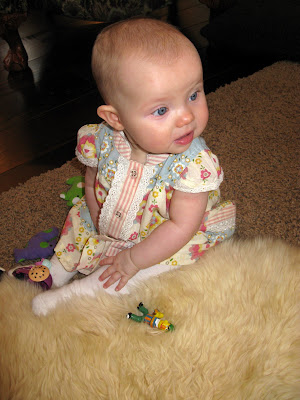 ...and will sit on her own from now on.
Easter 2009 is over...new memories have been made...old traditions have carried on. The hope which is Easter goes on...and gives us reason to face tomorrow!
Have a wonderful Easter Monday...