Voyager of the Seas

We called it our 10-year anniversary cruise...and it had been in the works for a long time. We gathered in Galveston, Texas on the eve of our sailing...five sisters and one brother...all our spouses and six nieces and nephews...from B.C., Alberta, Manitoba, Iowa and Texas. Ten years ago, my parents took us on a family cruise through the Panama Canal...we had such a fun time and decided then that we would try to do it again in ten years time. We did it! 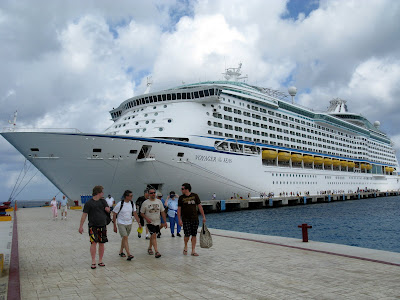 It seems there are always a few unforeseen things that come up...and so it was that my dad was not able to join us in the end, as he came down with pneumonia. The six from Manitoba were scheduled to fly out of Fargo, North Dakota...and suddenly it looked as though there may be no flights leaving Fargo on that particular day, as the Red River was expected to spill it's banks. So when we arrived in Galveston...we still had no idea if everyone had managed to find a flight to Texas. The Red River co-operated long enough to allow everyone to leave as scheduled...and so we had a pre-cruise party in Galveston that evening.

As you may recall, Galveston was hit hard by Hurricane Ike in September of last year. The cruise terminal was closed for some time...and the island is still in the process of re-building. Hurricane damage could be seen everywhere...from deserted buildings to scattered debris. 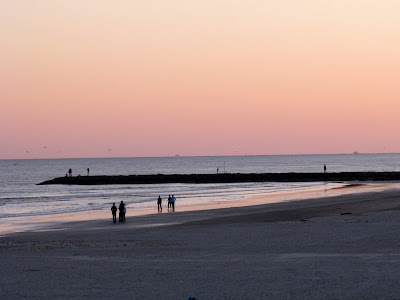 The beach, however, was as lovely as could be...cleaned up by the changing tides in no time! 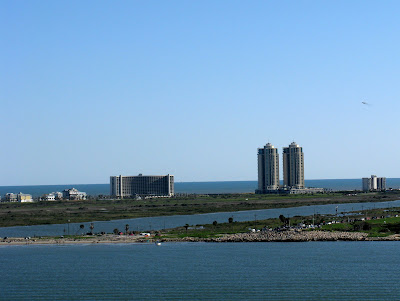 We bade farewell to Galveston in the morning...and set sail aboard the Royal Caribbean's Voyager of the Seas. I'll give a bit of a tour of our ship today. Before that...you need to join me at my muster station. 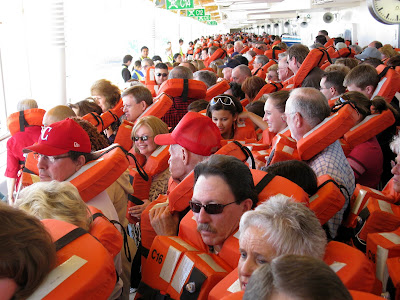 This is the one 'activity' no one ever tells you about before you go on a cruise...and no one ever talks about it afterwards. Before the ship sets sail...every passenger is required by law to meet at their assigned 'muster station' with their life jacket in place...for an emergency drill. Imagine over 3000 passengers...all dressed in orange...and all at their assigned place (think school!).
Once the ship was on it's way...we made our way to the dining room, for the first of many wonderful meals. 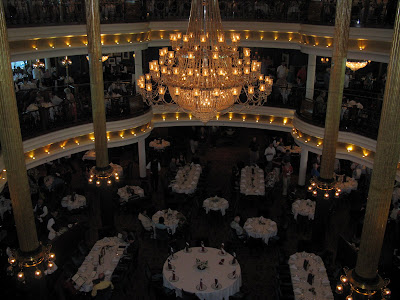 The food was delicious...the decor was amazing...as were all our servers! 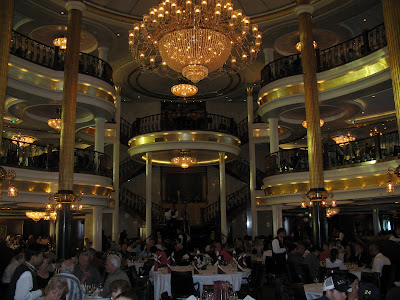 Not only did the dining room staff wait on us hand and foot... 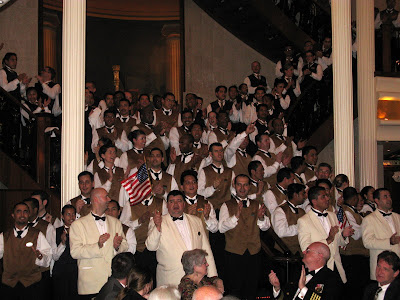 ...they also formed an international choir and sang for us on several occasions. 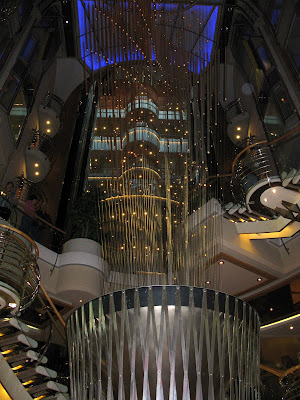 The centre of the ship is open...for more floors than I can recall... 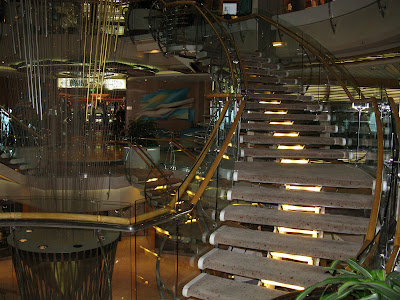 ...but those stairs and I became good friends. We have been on cruises several times...and have a 'no elevator' policy! I can't even imagine how many steps we climbed every day...but it's one small way to get a work-out during a week of pampering. 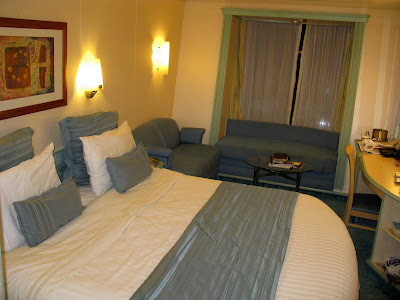 Staterooms on cruise ships are known to be 'petite'...but we were quite happy with our room and the layout. We had a 'promenade room'...with a window that overlooked the promenade deck. It would be a great place to sit and watch people...if one actually spent any time in the room. We didn't!
The room stewards do such a fine job! Every evening we returned to our room to find our bed turned down... 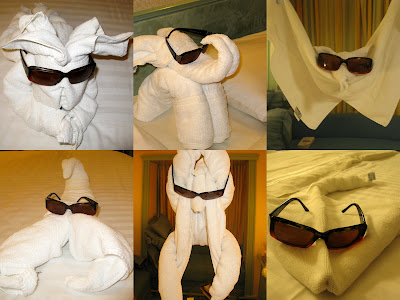 ...and some fabulous creation made from towels there to greet us. My brother-in-law (Terry)decided he would make his own 'creation' to greet the maid in the morning. He fashioned a very good looking man...using his own clothing...and hung him inside the door...where the monkey hung the previous night. The poor maid got quite a fright when she opened the door...but then called all her workmates to come take a look. They all had a good laugh!

The only photo I have of the Royal Promenade deck, is not all that great... 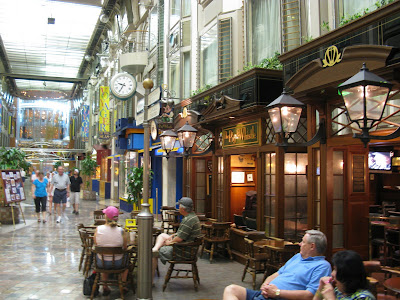 ...but gives you a bit of an idea what a shopping street on a cruise ship might look like.

When the Voyager of the Seas was built, it was the largest cruise ship in the world...and comes complete with an ice-skating rink. We took in the ice-show one night...and it was first class. 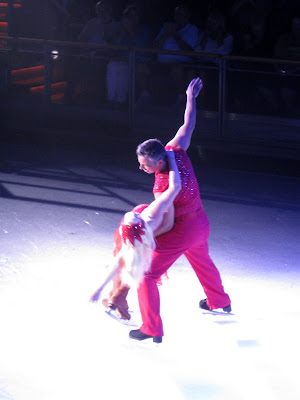 A Russian couple...who were one time world figure-skating champions...put on quite a show...along with an entire troupe of world class skaters.
And...just to say we had skated on a cruise ship... 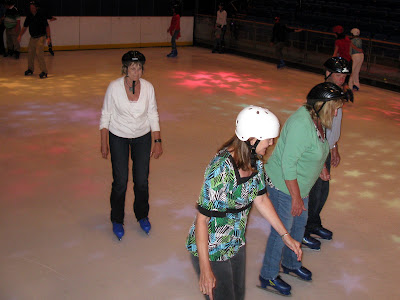 ...we participated in a free skate one evening. But we never really came on a Caribbean cruise to go skating...so let me take you to the pool deck. 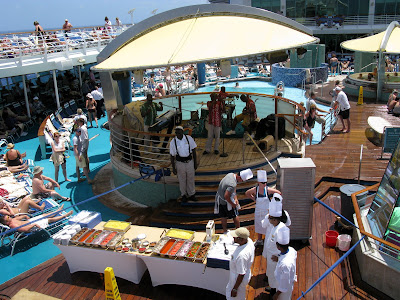 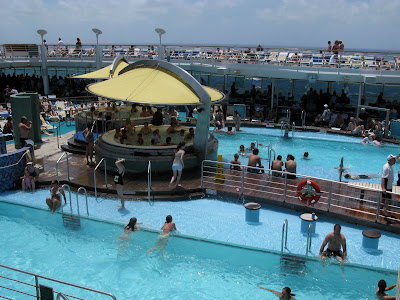 ...and there was a lot of action around the pools. 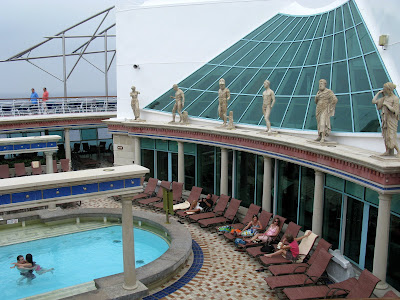 At one end of the ship, was an 'adult only' pool...which was much quieter. We always knew where to find our gang... 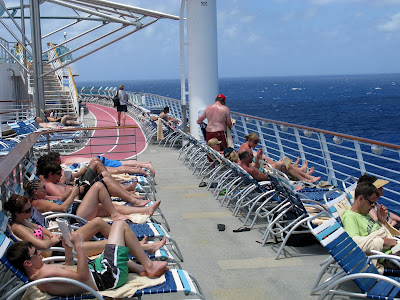 ...up on the top deck...in a quiet little alcove...overlooking the sea. When we weren't eating...we could be found up here...with a book! 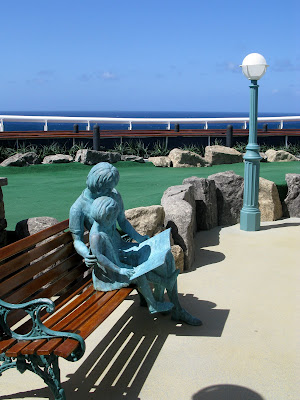 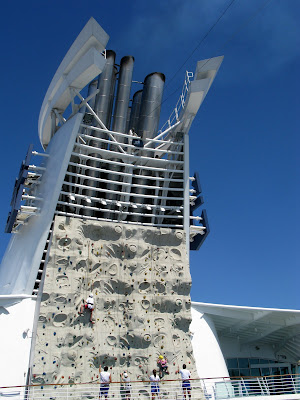 ...there was a rock-climbing wall. There was something for everyone...including wonderful shows in their theatre every evening. 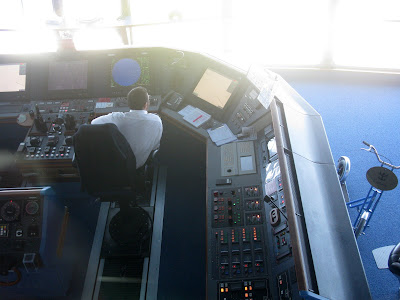 We spent some time exploring the ship one day...and found a viewing window, where we could watch the first officer in the bridge. He looked pretty relaxed about steering his big ship. 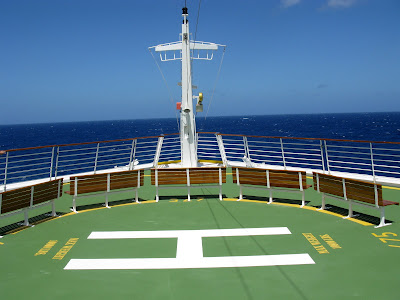 While on our self-guided tour, we happened upon a helicopter pad at the very front of the ship. With thousands of passengers on board...why were we the only ones here? It was great place with a view...and we decided to bring the whole gang down for a group picture. There was a lot of complaining...and groaning...and no one was too excited about vacating their chaise lounge to have a picture taken... 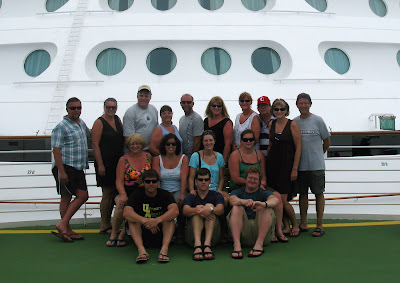 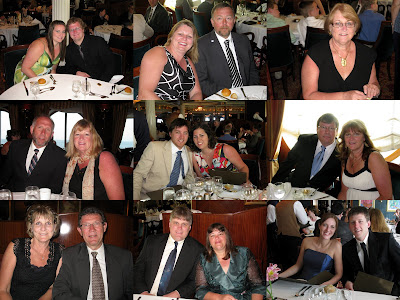 Oh yes...we did get out of our beach gear on occasion! And we also left the ship at a number of ports...which I will tell you about on another day.
Let me just say that it was a wonderful time...and are looking forward to doing it again in ten years!