Our seven day Texaribbean cruise had three ports of call along the way. Not only did we vacation at a five-star floating resort...we got to wake up with a different view every morning. 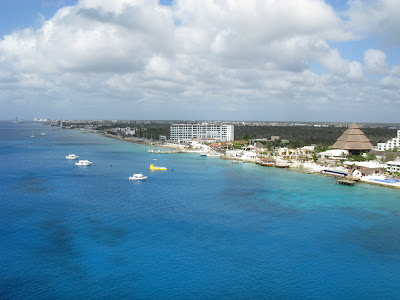 Our first stop was Cozumel...where many took the opportunity to book a shore excursion to the Mayan ruins. Since we had been to the ruins previously, we decided to have a beach day. 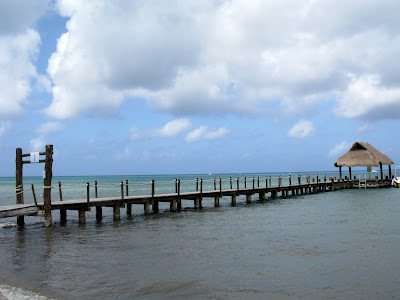 It included snorkeling...but my snorkel gear stayed beside the chaise lounge for the day...since the murky waters didn't look too conducive to viewing fish. But the view from the shore was quite lovely... 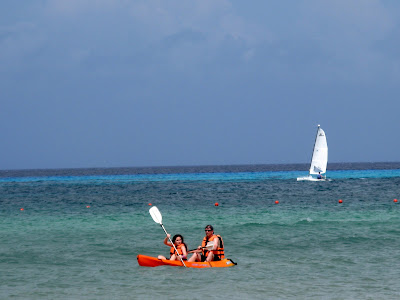 ...we watched kayaks and sailboats 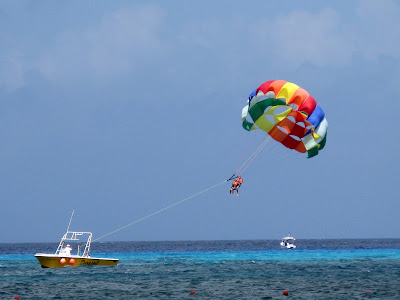 The following morning I awoke in Georgetown, Grand Cayman. Now this was a little piece of paradise! 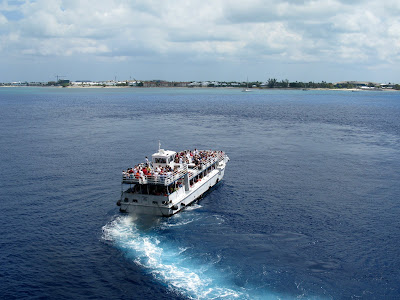 We went ashore by tender boat and took a short sight-seeing tour...before settling in at Seven Mile Beach for the remainder of the day. Grand Cayman is all about banks...and beaches! Many of the banks had most familiar names...like Scotiabank, Royal Bank of Canada and HSBC. With a population of less than 40,000 people...the 250 banks should serve the population quite nicely. My nephew (who remained behind in Winnipeg) had requested that rather than bringing him back a souvenir, my sister should open a Grand Cayman bank account for him. She hopes he'll settle for the wad of Grand Cayman Island currency she brought back on his behalf.

Our island tour included a stop at Hell.... 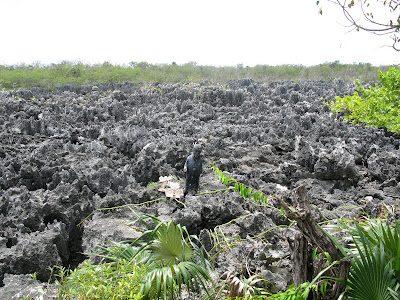 ...which is the site of a group of weird limestone rock formations. It looks rather bleak...and is about half the size of a football field. 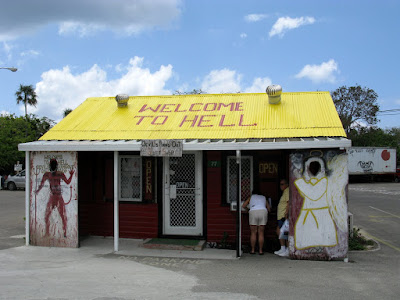 The little post office here is the perfect place from which to mail postcards back home. Who could we think of that would get a kick out of receiving a postcard from Hell? Why...Pastor Ron, of course. We'll see if he ever gets it...since I knew the address...but not the postal code. 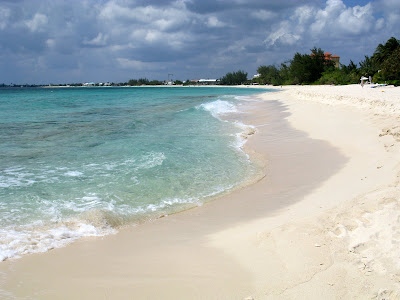 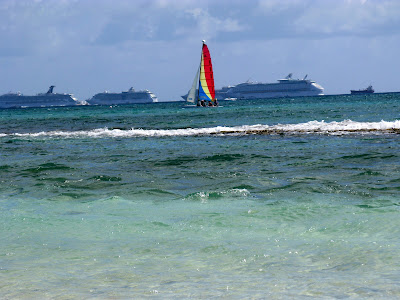 I'd go back to Grand Cayman anytime!
Our last port of call was Montego Bay, Jamaica. We decided to take a shore excursion which took the better part of the day...and gave us a good tour of Jamaica. Let's just say, I won't be promoting any vacations to Jamaica from what I observed. 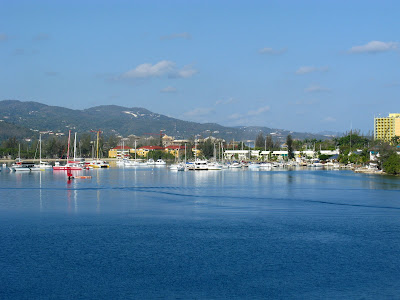 The highlight of our daytrip was our visit to Dunn River Falls. We knew that we were to come prepared to get wet...but I had full intentions of taking my camera with me. At the very last moment, we realized our hike was not on a path alongside the falls...but UP the actual waterfall. I quickly rented a locker where I could leave my camera and wallet... 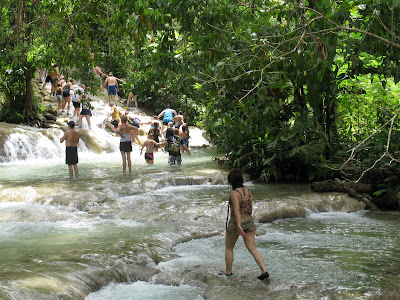 ...and joined the group hiking up the falls. What a fun time we had! 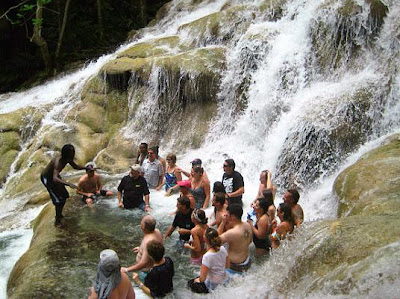 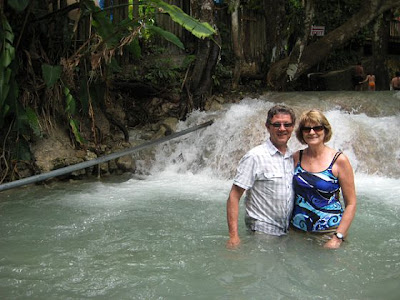 It was a rather wet two-hour coach ride back to the cruise ship!
We never saw any local coffee shops to speak of...but this is how coffee is distributed in Jamaica. 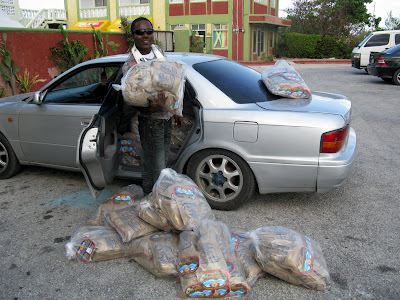 I could have bought a sack or two...right out of the back seat of the dealer's vehicle...but wasn't sure how Canada Customs would handle my purchase. 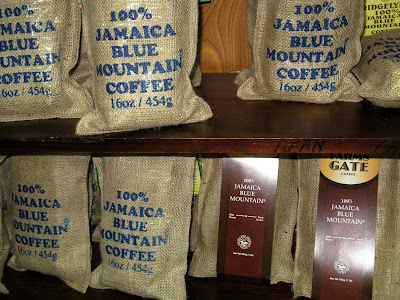 Blue Mountain coffee has developed a reputation that has made it one of the most expensive and sought-after coffees in the world. 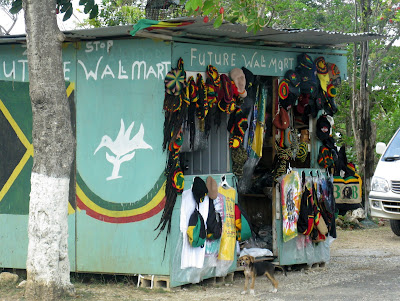 This was rather what the local markets looked like in Jamaica...complete with graffiti and interesting signage.
"When in Jamaica...do as the Jamaicans do!" I think that may be a little off-base...but my souvenir from Jamaica was a head of braids. I had no intentions of having my hair braided...and still have not quite figured out how I landed up in the chair and came out with braids. These people are forceful! The consolation was that it was just the front that was braided...and with all my hair...they were all but hidden. 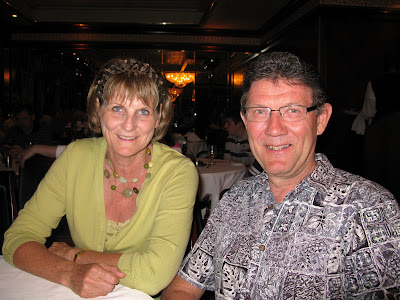 They braids came home with me...and my granddaughters were amused. 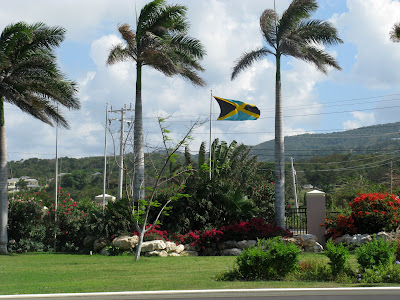 We left the Jamaican flag flying in the distance...and so ended our visit to three Caribbean islands. 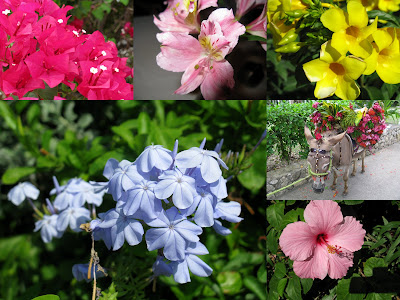 We are left with many wonderful memories... 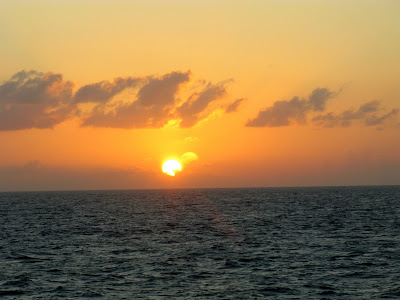