As I was writing yesterday's post...about the vintage car that never quite made it home last Sunday...I had to think of another old car experience some years back.

In 2001 my dad sold his property in the country...complete with his antique car showroom...and it was time to down-size.  He had some dozen cars of varying ages and in different stages of repair...all were Fords. Of course! In the mid-seventies he bought a new Lincoln Town Car...which he drove only on special occasions. After many years...the car joined his other antiques in the showroom...with very few miles on the odometer. So when it came time to part with all his vehicles...we kids all got to choose one...and some of us chose a few. My sister in Texas wanted the Lincoln...since it was in perfect shape and should not need repairs any time soon. Her plan was to fly to Seattle...where we would pick her up...and she would drive the car home after her visit to B.C.. 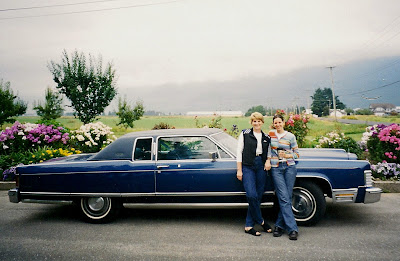 Since I was the one who would be picking her up at the Seattle airport...I decided I would go fetch her in her new car.  The car had been sitting for far too many years...and needed a little test run before the long road trip to Texas.  I talked my daughter into joining me...we thought we'd take our time and stop for lunch en route...and maybe at the factory outlets.  We both thought it was quite humorous to be driving around in 'the boat'...and so we posed for a photo before we left the farmyard that morning.

We crossed the border without incident, but were just barely on the I-5 when I noticed a slight vibration at highway speed.  If I drove a little slower...it seemed OK.  And so I drove a little slower.  And then the vibrating began again...and so I drove still slower.  What to do?  We took 'driving slow' to the nth degree!  The vibration became a thumping sound...and though the tires looked OK...I was quite sure there was a tire issue of some kind.  But we decided we would just continue to drive slow...and eventually we would arrive at our destination. We passed the factory outlets...but there was no stopping!  Lunchtime came and went...but we ignored.  We had a plane to meet!  A trip that should have taken three hours...took us twice that long...but we eventually limped into the airport parking lot...and ran to arrivals where my sister was waiting.

I gave her the car keys...and delivered the Lincoln safely into her hands.  Now what?  The area surrounding the Seattle airport felt less than safe...but we went in search of someone who could give us some good advice.  The verdict?  Though the tires looked fine from the outside...they had totally disintegrated from within.  The car needed new tires.  We limped to the nearest Wal-Mart...and my sister purchased new tires...then and there.  She learned early on that old cars cost a lot...even when they are free!

Our trip home was smooth sailing that day...as was her 2561 mile roadtrip to South Texas a week later.  She still has the car today.  Her neighbour wishes it was his...her son cleans it...and it gets driven once in awhile.  She agrees that ...'old is good...just not always reliable'.

Have a wonderful Wednesday!