the piano plays on...

We never had a piano in our home when I was growing up...and though I am not so sure I would have enjoyed the practicing...I often wished I could play.  We bought a brand new Yamaha piano when our children were of 'piano playing age'.  There were other things we would have rather spent the money on...but giving our children the gift of music seemed the right thing to do. Our oldest was quite excited about learning to play piano...for a time.  Our second son had no interest whatsoever in playing any instrument...and we decided not to subject him to lessons.  Our daughter played a little piano...and a little flute...and loved to sing.

When we moved from the farmhouse six years ago...we decided we would not move the piano.  Moving a  piano is not an easy task...and why did I need a piano?   Our middle son...the one with no interest whatsoever in pianos...moved into the farmhouse...and found himself with a piano.  Though it was not technically his...we all know that 'possession is nine-tenths of the law'.  Since he still had no aspirations of becoming a piano player...and since it is not good for an instrument to sit idle year after year...his daughter has been taking piano lessons this past year.  Spencer invited us to her year-end recital over the weekend... 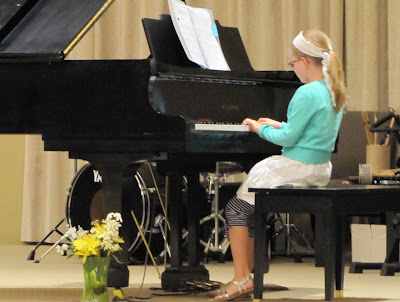 ...and did a fine job of her pieces.  She would rather play behind closed doors...and without an audience...but she stepped up to the challenge...and we were so proud of her.
Her dad was in the audience...checking the program frequently to see how long until his daughter would be playing.  Ryder yawned...and stretched...and rolled his eyes...during one well-rehearsed piano piece after another.  Finally...it was Spencer's turn.  Now everyone was paying attention!  And when the clapping died down...her father and brother slipped out...unnoticed...while the recital continued.  I don't think Ryder will be playing the piano anytime soon... 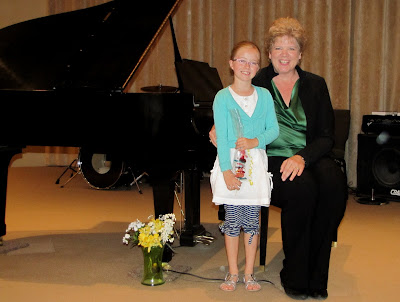 ...but maybe if he had the same teacher his sister has...he could be coaxed to give it a try.  She is the best of teachers!

I'm glad the piano is still making music...after all these years.  Music...it's good for the soul.


'There's nothing remarkable about it.
All one has to do is hit the right keys at the right time and the instrument plays itself.'
~Johann Sebastian Bach
Smile!