I rather like things from the past...and so have quite a few old things in our home.  I found a very old picture frame at an antique store during our travels a few years back...which now frames a photo of two little girls from five decades ago and hangs in our great room.  I mentioned to a friend that it would be nice to have a matching frame on the other side of the large window.  It was a simple statement...not a hint!  The next time she came for a visit...she brought me a matching frame from her collection of antiques.  She wasn't using it...and thought I should.  How nice is that? 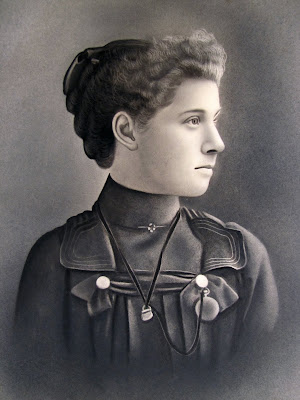 The frame came complete with a portrait...of a serious and contemplative young woman.  Though I am sure someone would like to have this portrait...especially if she happens to be a great grandmother or great-aunt...to me she had no significance...and so I set about to find another old-fashioned picture to put in the frame. 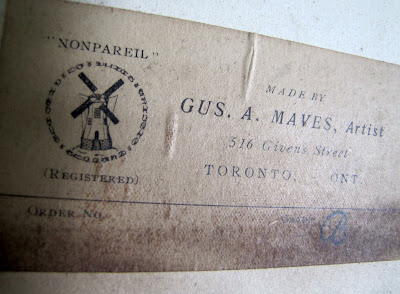 It was only as I was placing the new photo in the frame...that I saw the signed label of the photographer/artist on the back.  So I did my research...of course.  Who was Gus A Maves?  I discovered that he was a famous Victoria photographer whose works are now featured in the B.C. archives at the Royal BC Museum.  He was born in Toronto in 1882...and was most active in Victoria during the 1920's and 30's.
He specialized in scenic landscapes for postcards, and photography of homes, gardens and agricultural activities. His wife Margaret did the coloring of his photographs and also “transformations” to turn a photograph into a piece of art.

So here is what I know...this portrait was taken around the turn of the last century in Toronto.  That's it!  I contacted someone who was looking for any artwork of Mr. Maves...and he was quite willing to take the 'mystery woman' off my hands...if I would package her up and send her his way.  But I decided that I would just keep her...safe. 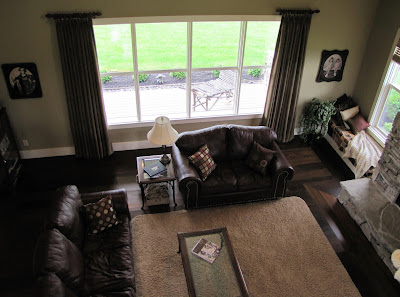 She is now covered up...and hangs on my great room wall...beneath an 'old west' photograph that we had taken on our twenty-fifth wedding anniversary.  Even that is almost an antique by now!
But if you think the mystery woman belongs in your family tree...let me know.  She can always be uncovered!
Enjoy the day...