south of the border shopping adventure...

Since it was raining...and we both had reasons to go south...yesterday seemed like the perfect day for us to brave the border line-up...and head to Bellingham. I stopped by to pick up my two passengers and we weren't far down the road...when Heidi mentioned she was feeling somewhat car sick.  Oh dear...some things haven't changed over the years.  She was just an infant when we realized that car rides did not make her happy!  Road trips of any length always called for 'gravol' before leaving home.  Maelyn seemed quite happy on her own in the back seat...singing along with the Cedarmont Kids.  The nice man at the border didn't keep us long...and we were soon at our first stop, Ship Happens...where Canadians pick up their parcels without having an American address.  When I returned to the car with parcels in hand... 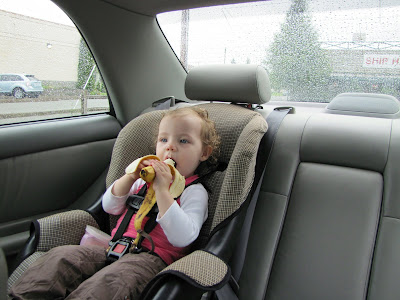 ...Maelyn was sitting in her corner enjoying a banana.  Hmmm.  I asked Heidi if she knew that no banana had ever been eaten in our car before.  She seems to have forgotten our 'no food in car' rule since she's left home.  The rule hasn't really changed...but Grammy decided we would bend it...just this once.
Soon we were back on the road...on our way to Joanne's Fabrics.  And this at my daughter's request...the one who doesn't sew!  We didn't get very far before we realized...Maelyn is more like her mommy than we might have thought.  It seems she gets car sick as well!  Uh...oh!  Poor Maelyn.  Her clothes soon lay discarded in a bag...and with no spare set along... 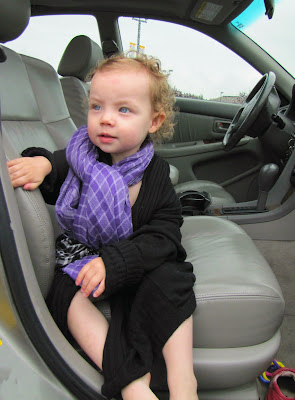 ...she agreed to wear mommy's sweater and scarf.  She sat and shivered while mommy cleaned up the backseat as well as she was able.  We decided to postpone Joanne's Fabrics...and opted to stop by Target first...where we were sure to find an outfit that would fit Maelyn a little better than the one she was sporting. 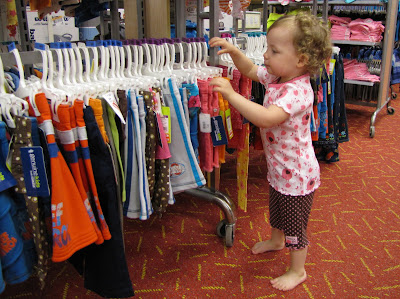 She looked rather like a seasoned shopper...flipping through racks long after we had her outfitted. 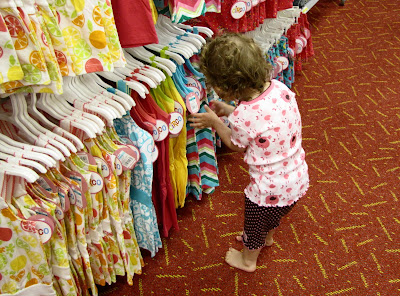 I love that she checks the labels!  I'm thinking she has seen it done that way. 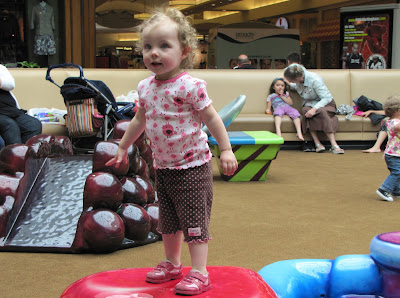 She was not really in a hurry to leave this place.  Just outside the store was a playground... 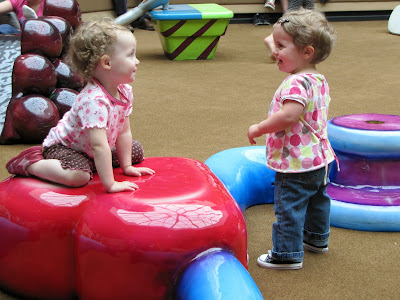 ...where it seems she met up with a friend. 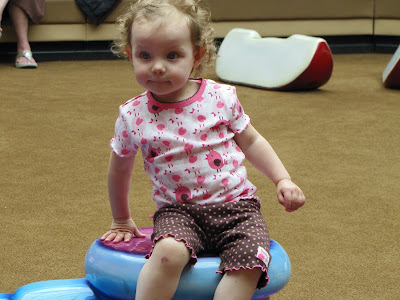 After a little coaxing...we were on our way to the fabric store.  The trip home was uneventful!  Maelyn was happy with her new Carter's outfit...and slept soundly in the back seat...while mommy kept her eyes fixed on a spot straight ahead.
There are many good reasons to shop at home.  If only we had a Target...and a Joanne's nearby.
Have a wonderful weekend!