We have had eagles coming to our farm every winter for many years now. I actually don't recall seeing eagles in our area when I was a kid...but maybe I just wasn't paying attention! 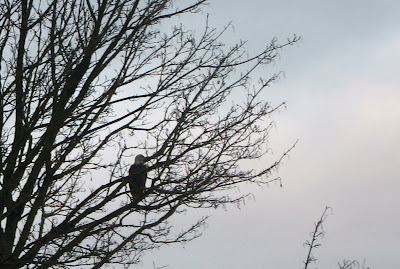 One day there were nine near the ditch behind our house...but they aren't all that easy to photograph. When they see me coming with the camera, they make a hasty retreat. On Sunday morning I noticed there were five in a tree...not too far from our house. I just kept snapping pictures as I walked towards them & actually managed to get a few. They apparently do not care to have people within 200 meters...so I was definitely in their space. 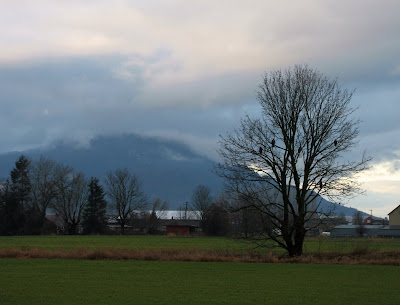 I had to do a little homework on eagles, just to be sure I had my facts straight. (Although I know my good blog readers would set me straight if I pass along misinformation!) Every fall one of North America's largest populations of bald eagles returns to the Fraser Valley to spend the winter. They come to feast on the remains of spawning salmon along the Fraser and Harrison Rivers...and when that food supply diminishes, they move further afield (that's where we come in!). 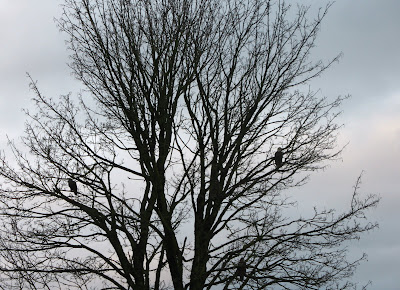 Sometime in December they take up residence here...usually in the trees behind the barns.
Their main food sources are fish and carrion, but they will also catch and eat small mammals, waterfowl and seabirds. My granddaughters are a little suspicious of the eagles...it seems the kitten supply on the farm is diminished whenever the eagles are around!
But, unlike the trumpeter swans, ducks and starlings which inflict a lot of damage on the farm, the eagle is a welcome friend. I just love watching them swoop and soar...they really are a magnificent bird. 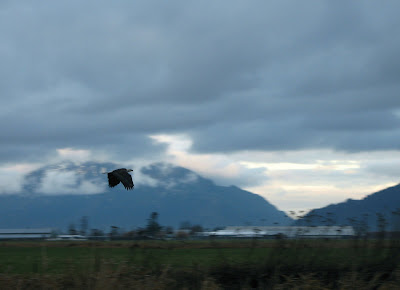 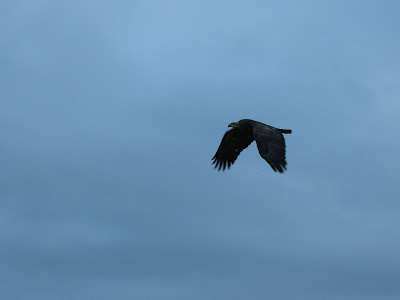 Some of them do not have the distinctive white head. I was hoping that it wasn't the homely female with the dowdy colouring (isn't that how it works in the bird kingdom?). What I discovered is that it takes five years until they develop the adult colouring...the one in this picture is a youngster! Eagles live to be about forty years old in the wild....and weigh between nine and twelve pounds (the female is bigger than the male). They have a wingspan of about 7 feet and are the largest raptor in British Columbia. 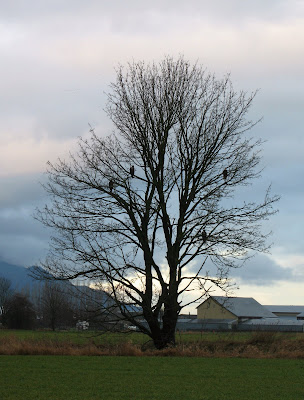 Since I've been 'under the weather' for the past few days (the car has been sitting in the garage un-moved since Sunday!), I've had a lot of time to look out the window. The only problem is that I don't have eagle eyes (their vision is about 6 times better than that of a human)...so I have my handy Bushnell binoculars lying nearby. The eagles have been putting on a show every day...they are out there as we speak!

So that is your 'Audubon' lesson for today! Some things are just meant to share. The sun is shining & it's a new day...lets' see what it brings.

Email ThisBlogThis!Share to TwitterShare to FacebookShare to Pinterest
Labels: beautiful british columbia, life on the farm