When I started blogging last August, I had no idea what I was doing…still don’t, for the most part! But I am great on preserving history, so I thought a blog would be a fun way to keep track of those little things in life that will never make the news. And that’s mostly where life happens…in the little things. And if the little things from ‘my front porch’ can be an inspiration to anyone, I am ever so honoured! Jan from Kingman, Arizona has given me the Amazing Blogger award. So I will graciously accept, and say 'thank-you'...and then pass it along to someone who is much more worthy!

Along with the award, came instructions to post seven random things about myself. I was pretty sure I couldn’t think of seven weird/interesting things about myself…but my hubby thought I needed a longer list! I received a similar tag from Vee before Christmas, and had been postponing...but now I will just combine all tags. So here they are...seven strange, but true facts about me.

1. I’m a doodler. While talking on the phone, I doodle. Unfortunately, I have destroyed lots of perfectly fine documents, that shouldn’t have had doodle on them…simply because they were lying next to the phone!

2. I'm not really a chocolate fan! Other than the occasional Swiss chocolate...or chocolate covered nuts, I'll pass on chocolate. I would never choose a chocolate dessert. There's not many people who don't like chocolate...so I guess I am an oddball!

3. I live in a great area for skiing, and people come from around the world to ski on our hills…but I’m just not a skier. I will never forget one of my first skiing experiences. After mastering the bunny hill, I was ready to conquer the chairlift. I was mistakenly under the impression that the chair would stop to let me off at the top. Suddenly, I realized that was not the case, and my window of opportunity for dismounting had passed me by! Now what? The whole chairlift was brought to an abrupt stop, and I was assisted from my lofty perch, while a whole crowd of onlookers watched. I still get nervous just thinking about going up the chairlift!

4. I have had a broken nose...more than once. The first time happened during a softball game, a few weeks before my high school grad. I had the good fortune of having a cast on my nose. I'm sure they don't do that anymore!

5. I never eat huge slices of dessert. I tend to cut off a tiny little piece…and then another…until the whole pie/cake/doughnut is gone! (But if I only take half a piece of dessert...don't take the other half, because I'm likely coming back for it!)

6. I love playing games…board games, card games, puzzles, whatever! Scrabble is always fun, though I don't know too many other scrabble enthusiasts. Elmer and I play a lot of card games for two, while we have our after-dinner coffee….or evening coffee…or morning coffee. 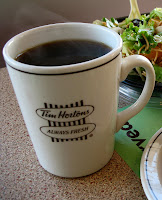 7. Which brings me to the last point…I love coffee! Next to water, it is my beverage of choice. Black…with a little milk on the side would be nice & no sugar, please! Tim Horton’s, Starbucks, or Seattle’s Best…I like it all. My everyday blend is actually a Kirkland coffee from Costco.

So there you have it…seven things you never knew about me. And I would like to take this opportunity to pass along the 'Amazing Blogger' award to Julie @ Pearls in a Nutshell. She has such wisdom...and she's willing to share it with us. If you haven't yet been to her devotional blog, grab a cup of coffee and pay her a visit!