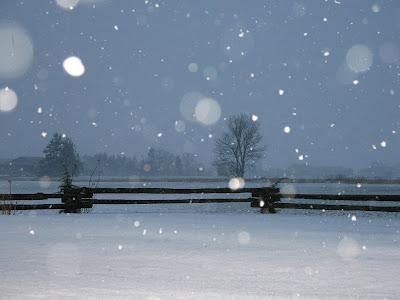 This is the view from my kitchen window this morning...it's snowing and blowing and there's not much to be seen! It looks like a good excuse to close the schools (we do that in response to a good snow storm on the west coast)...I haven't seen any school buses go by, but haven't actually heard that classes are cancelled.

Yesterday morning, amidst warnings of the coming snowstorm, I made a quick trip to the Sumas flats with Broni and Ryder. (That is not a place one wants to be when white-out conditions hit!) For Ryder's second birthday, we had made arrangements to have his portrait taken at a studio out in the country. Twice we had cancelled his appointment due to illness, so we were determined to get the job done this time...regardless of the weather. Not knowing we would be in a deep-freeze, we had bribed him with a visit to Birchwood Dairy for an ice-cream cone and a visit to their petting zoo, once he was done smiling for the camera! He co-operated quite nicely, but asked for ice-cream as soon as the photo shoot was completed. What's a grammy to do? 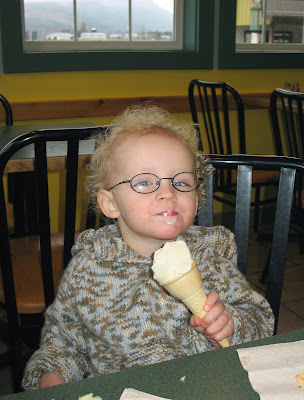 Off to Birchwood we went...the wind was howling and the petting zoo was closed for the season, but there was lots of ice-cream! And we were the only patrons on this blustery winter day.
Ryder enjoyed his cone...we warmed up with some coffee, and soon we were back on the road. While I drove, Ryder amused himself with his new mittens...he found them most intriguing! We made it home before the storm arrived. 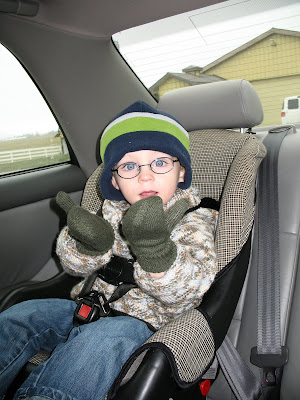 In the afternoon Kris stopped by with Ranen. I'm sure she was hoping Grammy still had the 'playground' in her great room. A few days ago when they were over, Ranen headed straight for the 16 foot ladder sitting in the middle of the room and began to climb. She is a determined little girl of 20 months, and wasn't really thrilled to be rescued! 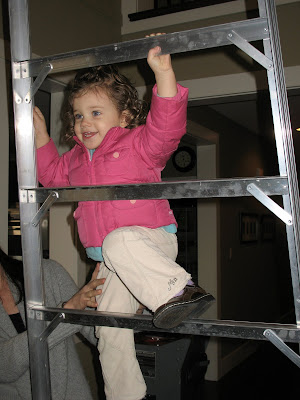 No ladder today...and all her favorite books were missing. (All of Grammy's books have been sent away to be 'refreshed'...they are having the smoke smell removed.) We found some toys, and had a snack...and all was good. They headed for home as the snow was beginning to fall.
So it's been a week since I fumigated our home with a pot of hamburger spaghetti sauce. Bit by bit the smell is disappearing (or we are getting used to it!)...and the house is returning to normal. My area rugs are coming back today...and the rest of our belongings should be back in the next day or two. Last night we were invited out for supper...what a treat on a snowy, blizzarding winter day! Marg (my bloggy friend) decided she would show us what a real spaghetti dinner should taste like...since we never got a chance to try the one I was preparing last week. As soon as we walked in the door, I knew it was going to be good! It smelled great...not at all like what I've been smelling all week. We enjoyed a fabulous spicy meat sauce with pasta and Lovella's famous papaya salad...and finished off the meal with a yummy hazelnut dessert.

Once the table was cleared, we moved right into a rousing game of Rook. How fun to revive the old card game on a snowy winter night! Rook was invented by Parker Bros. over 100 years ago, and has enjoyed a resurgence in popularity these past few years. The game was apparently created as an alternative to playing cards and was sometimes called 'missionary poker'. At any rate...it's a fun game. The evening ended a little too soon though, since the guys came out on top...had we had a few more rounds, things would have turned out quite differently, I'm sure!

It was a wonderful way to spend a winter night! The storm brewing outside couldn' t touch the warmth we felt inside the home of our friends. Thanks for the good time, Marg!