As I have said before, I love playing games. Thankfully, I live with someone else who loves playing games...I think he just likes to beat me at my game! We go through spells where we play Sequence...then it is Rook...then Yahtzee...but our game of choice for the past few weeks has been Crokinole. We leave the table set up in the library, and we just carry on where we left off last time. 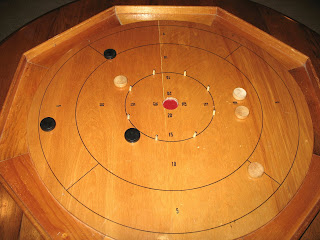 I was rather surprised when I recently read about this great new board game which was making a resurgence. The article said "If you haven't yet heard about it, you soon will". The game was crokinole. Since it is soon to be the rage...and since I am in the middle of a crokinole tournament that is heating up...I thought I should introduce the game to all of you who are unfamiliar with it (is there anyone like that?).


Crokinole is one of those games I grew up with...and the board we use is also one we grew up with! It looks a little worse for the wear, but I love heirloom things...so it works for me. Crokinole is also a Canadian game...it was first made in Ontario in 1876. It was very popular among the Amish and Mennonites...it was something they could play in the sanctuary of their own homes. I recall my dad and his friends sitting around the crokinole table for hours on end...all the while, spinning tales and eating candies. So it feels rather nostalgic to play the game. 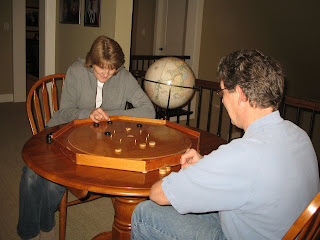 For those of you not familiar with the game, crokinole is a dexterity game where you flick small wooden disks across a round wooden board. The goal of the game is to score points by landing your disks in a center hole of the board, or by getting as close as possible. If your opponent has disks on the board, you must try to shoot them off. That's the shorthand version of the game, but it can get much more complicated (believe me!).


In our on-going battle, we are at three sets for the guy(s) team and one for the gal(s). But, not to worry...I like coming up from behind! But now I better get on with the game plan for the day. Some of the kids are coming for lunch...and we are having apple pancakes by request. And tonight we plan to take in our local theatre production of 'The Glass Menagerie'...a timeless tale of fragile people dealing with the realities of life. I actually know nothing about it, but I'm sure it will be great!

So enjoy your day...whatever your game!