We had the most glorious spring day yesterday...with temperatures reaching record highs. There is much gardening to be done (as in...pulling weeds and digging edges)...and it was the perfect day for doing just that. 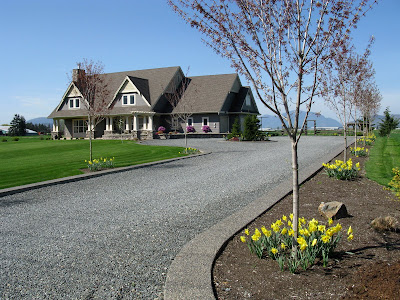 If you look at our yard from far enough away you don't actually see the weeds...or the shaggy edges...but when hubby tells me the weeds are beginning to go to seed...I get the message. I reasoned that if I spent the morning working hard out there...I could take the afternoon off and go for a wee bit of a climb.

We parked at the base of the mountain...and walked the trail just as we did last week. We have a routine... 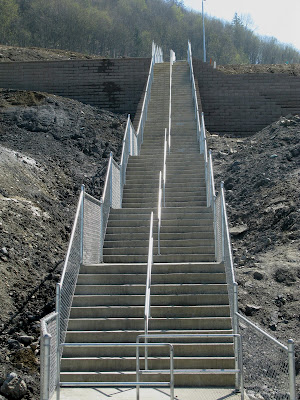 which includes stairs...many of them! Oh yes...and at the top of the stairs we need to do a plank. 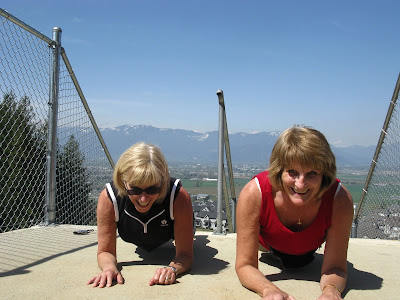 Trust me...a simple hike can include all kinds of things I hadn't counted on! Who needs a personal trainer if you go hiking with Marg? 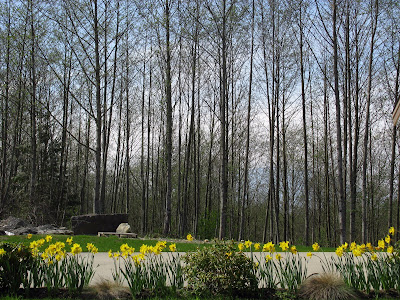 We carried on up the trail...where forest meets subdivision......and quite enjoyed the colours of spring. 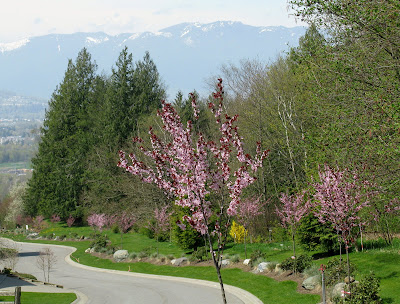 It wasn't long and we came upon the second set of stairs... 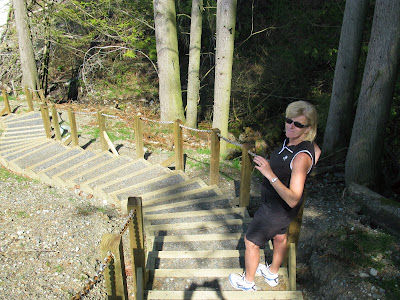 ...101 this time. After discovering we would need a few more hours if we wanted to make it to the top of the mountain...we decided that we would leave that challenge for next time! 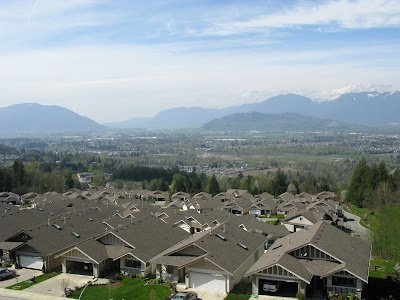 As you can see...we weren't exactly in the woods. At the rate the houses are being built on the mountain...there will be more roofs next week.

We weren't the only ones out on the trail yesterday! We met up with a few others......who were out on the campaign trail. 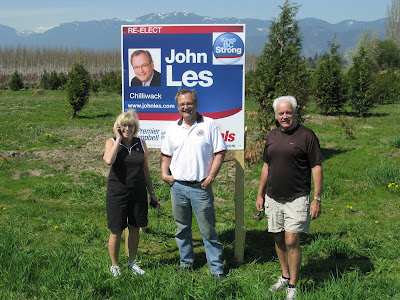 We have a provincial election coming up in a few weeks... ...and one politician was busy putting up signs. Since he happens to be Marg's representative in Victoria...she gave him a little encouragement...before we carried on our way. It seems there is already concern about the date of the provincial election...May 12th. It is quite possible that the Vancouver Canucks may be playing hockey that night...and since British Columbia residents feel quite strongly about supporting their local team...they may just forget about voting. Hockey and politics just don't seem to mix!

Speaking of which...the Vancouver Canucks are going to the second round of the Stanley Cup playoffs. That's for real!

I'm back on the trail this morning...bright and early. I'm off to Abbotsford to visit my dad in the hospital...and pick up farm equipment parts enroute.