What is there to see in Colorado Springs?

Well, let me tell you!  We followed up on many of your suggestions...and found some most interesting places to visit while in the area.

Garden of the Gods seemed to be high on everyone's list...and for good cause!

Located just north of the city...the 'garden' is in reality a park made up of unusual rock formations. The property was donated to the city in 1909 with the stipulation that admission to the park would be free...and so it is...even 100 years later. 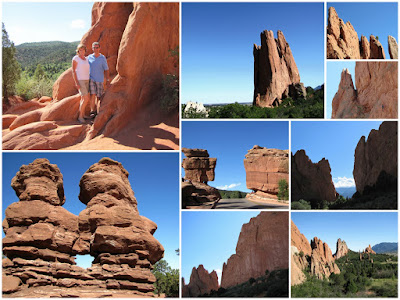 There are many hiking trails...and rock climbing is allowed with a permit.  The rocks all come with interesting names...like Tower of Babel, Siamese Twins and Balanced Rock.
Not far from the Garden of Gods...is the United States Air Force Academy.  It would not have been high on my priority list of places to visit...but we were told we shouldn't miss it.  And so we toured...and it was most interesting!

The campus covers 18,000 acres on the east side of the Rockies just north of Colorado Springs. 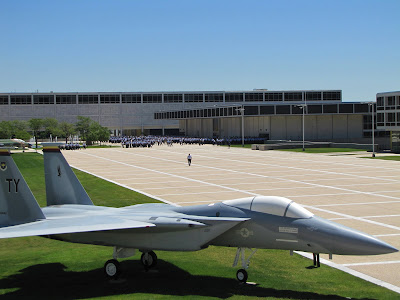 The 4,400 cadets had just finished their lunch when we visited...and left the dining hall in fine form! 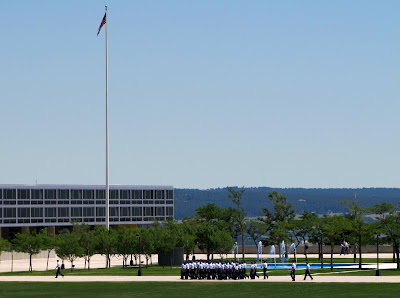 No one was out of step. 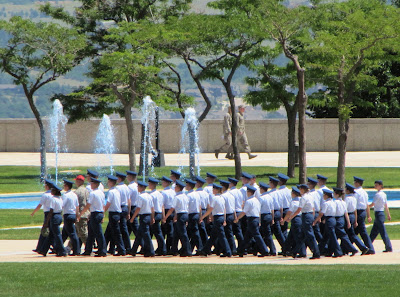 They are in sync at all times! 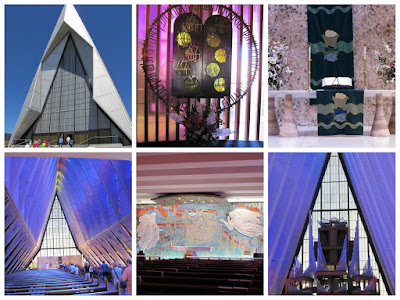 The showpiece of the campus is the Air Force Academy Chapel...an all-faith house of worship designed to meet the spiritual needs of cadets. It contains a separate chapel for Protestant, Catholic, Jewish and Buddhist religious faiths, plus two all-faiths worship rooms. We took a tour of the aluminum, glass and steel structure which features 17 spires...and was completed in 1959.
The Academy is one of the largest tourist attractions in Colorado...and attracts more than a million visitors each year.
Another top attraction in the area is the cog railway to Pike's Peak...which is easily the highest railway in North America. 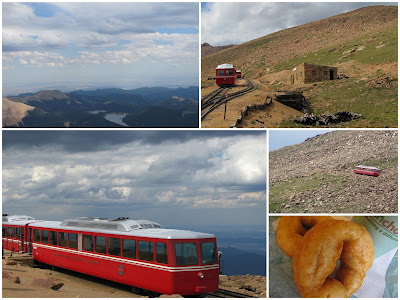 Since 1891, Pikes Peak Cog Railway has taken millions of people on an unforgettable trip to 14,110 feet! Though the view was not the best on the day we chose to visit the peak...the ride was one we won't forget...and the donuts at the top were as a bonus!

Someone suggested we take in the chuckwagon supper at the Flying W Ranch...and so we did.  What fun! 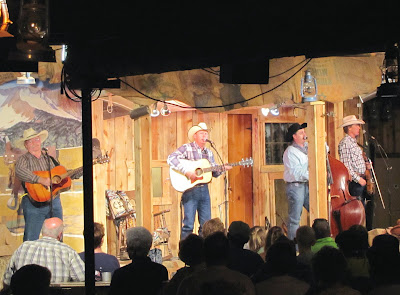 The Flying W Ranch is a working mountain cattle ranch that has specialized in western food and entertainment since 1953. The Flying W Wranglers serve the authentic cowboy dinner...and top the evening off with a 'country and western' stage show...which is really very good.  I'm guessing there were close to a thousand people there...tourists from all parts of the globe...having a good time...cowboy style.

Thanks to all of you who told us what to see and do in Colorado Springs.  We also visited Focus on the Family headquarters, Glen Eyrie Castle, Manitou Springs...and our home base was the KOA...as usual.  We had a good time!

Have a wonderful weekend...