Yesterday we had the privilege of paying our respects to a man who was a wonderful neighbour for many years. 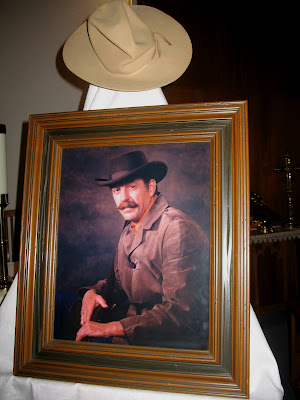 John-Fife Spencer was a colourful character...with a big smile, a waxed mustache of gigantuous proportions, who wore an assortment of weird and wonderful hats. He drove around in his large Cadillac with the personalized plate, delivering eggs to his many friends...often with a grandchild or a dog along for the ride. He was also a man with a kind heart.

When our children were young, our property adjoined the Spencer's nut farm. He made it clear that their pool was available for our use anytime, and would often call to see when we were coming for a swim. The kids have such fond memories of all our treks through the nut orchard to take a dip in Spencer's pool. Since John had a penchant for swimming in nothing more than his birthday suit, we soon figured out that we needed to make a lot of noise as we approached, lest he be caught unaware!

John was also an avid football fan and a B.C. Lions season's ticket holder. When our boys were around the age of ten and twelve, the Spencers offered to take them along into the big city for a football game. It was a treat they will never forget. Two country boys, whose idea of fine dining was the White Spot family restaurant, were taken to the finest of steakhouses in Vancouver. From there they were driven by a chauffeured limousine to the football stadium. Whether the B.C. Lions won or lost that day was of no consequence to two young boys who had the most unforgettable experience!

John gave much to our community and was known as the unofficial mayor of Rosedale. He served as a local councilor, was an auxiliary RCMP officer, served on the Arts Council and worked tirelessly to have the Hope River restored to its original condition. John suffered a speech impediment...but he never allowed that to keep him from participating in a very public life. He sponsored public speaking competitions in our community for many years.

John was known as 'the Rosedale nut grower'...and he liked the notoriety that came with that title. He gave out T-shirts which sported a variety of slogans about nuts...which weren't always appropriate for teenage boys to wear. I recall having to make one such shirt disappear...since my boys got a chuckle out of wearing it!

Every fall we gathered hazelnuts in the Spencer orchard... 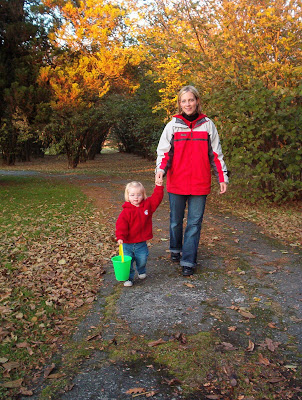 ...the last time being a few years ago when the grand kids joined in the fun! Then one day John Spencer called to tell us they were selling their farm and moving to the city. But we should bring our whole family and come for one last pool party. So we did just that...for old times sake! We wished them well as they moved to be nearer their children...and said we would drive out to see them once they were settled. We had good intentions, but it just never happened. And then came the news that John had passed away following a short battle with cancer.

So now we made the trip to see his wife and family...to pay our final respects to a colorful man with a big heart who was a great neighbour. The church was packed with people from this community who had also made that same long drive...his life had impacted many.

If you have 'a good neighbour' in your life that you've been planning to visit, just do it...tomorrow may be too late!