The Easter weekend is almost behind us...a weekend of happiness and celebration for the most part. But there was also a great sadness next door for two precious little girls.

It was six months ago that an Italian mastiff pup named Nora arrived at the farm, amidst great excitement. Emme and Spencer couldn't get enough of their cuddly wrinkles puppy! 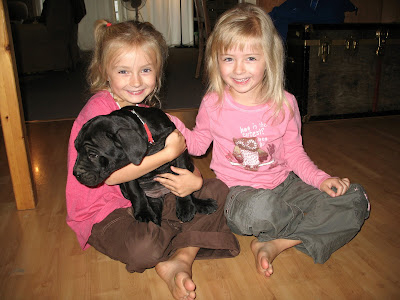 But Nora was a pup...and a very large one in no time. She outgrew the lap-dog stage very quickly, and was rather rambunctious. Soon the kids were afraid to go outside unless Nora was in her kennel...as she tended to bowl them over in her enthusiasm. She graduated from her first session at training classes...but seemed to have a little difficulty recalling her trained behaviors at times. No jumping...stay away from the road...do not chase the cats...stay out of the chicken barn...do not take Grandpa's shoes...do not drag the barn garbage all over the yard...too many rules for a young'un to remember! But despite her unruly ways, the girls loved their Nora!

And Nora loved life on the farm. She was somewhat like a tempest in the milking parlour, and wasn't allowed in...but spent a lot of time watching the cows being milked through the open window. 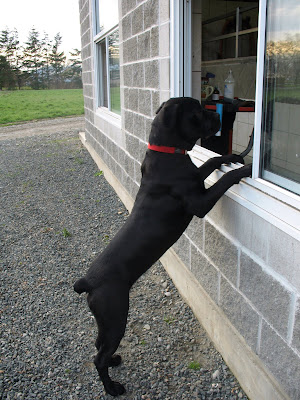 That was last week...she won't be back for milking anymore. A few days ago, she darted onto the road...was struck by a car, and instantly gone! I got a phone call from two little girls awhile later, telling me between sobs that Nora was dead. My heart went out to them...but I couldn't make it 'all better'. They came for a sleepover that night...we made Easter treats...and they drew pictures of Nora...and wrote stories about the good puppy that she was.

They had a good sleep and in the morning they came down the stairs with their 'comforters'. 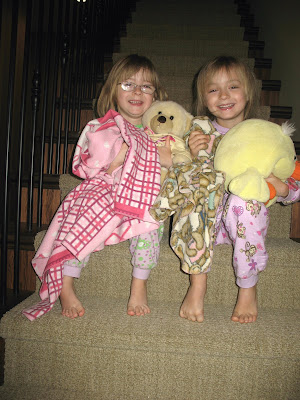 The stuffies come and go, but those blankies never change. The fleece blankets were given to them as baby gifts by my aunt (she would be their great-great-aunt). Aunt Kay could never have known that six years later those blankies still go to bed with them every night. Small things bring great comfort...especially when a puppy you loved is gone forever.

Puppies are so hard to have...and so much harder to lose!