san simeon and beyond...

Who says one needs to go on a European vacation to tour castles? We (I use the term loosely) have our very own castle in America...one of the world's greatest showpieces sitting on an enchanted hill overlooking the Pacific Ocean. 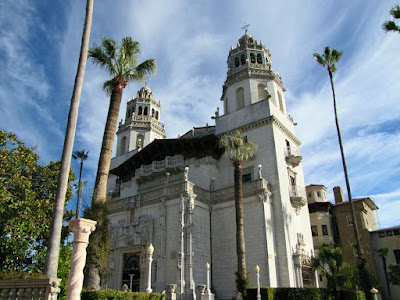 That would be Hearst Castle...a magnificent Mediterranean-style estate, resting on a mountain above San Simeon, California. The castle was built by newspaper magnate William Randolf Hearst early last century...on a ranch that William Randolph's father, George Hearst, originally purchased in 1865. The younger Hearst grew fond of this site over many childhood family camping trips. He inherited the ranch in 1919, which had grown to 250,000 acres and fourteen miles of coastline. Over nearly three decades, William Randolph Hearst’s ranch evolved into Hearst Castle, and became the setting for legendary parties during the Golden Age of Hollywood. The castle and all it's contents were given to the US government in the 1950's...but the Hearst family kept most of the property and still maintains an 80,000 acre cattle ranch at the location. Today Hearst Castle is a State Historical Monument and one the the most popular tourist destinations in California. 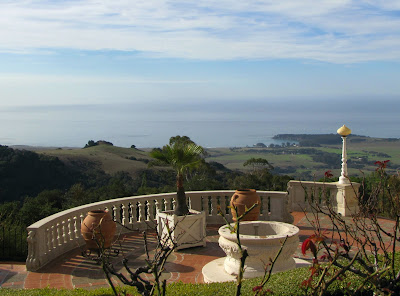 Hearst Castle sits at the top of a steep hill...which can only be accessed by official tour buses from the visitors centre these days. 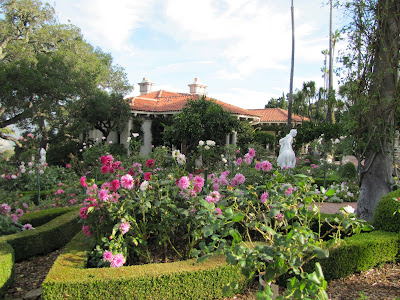 We toured a guest house and amazing formal gardens...but the castle itself was the highlight of our visit. 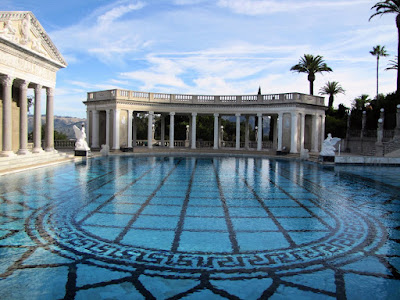 Our castle tour began outside at the Neptune pool. This pool was rebuilt three times during William Randolph Hearst's years...each time it became a little larger. It is now 104 feet long and 95 feet wide. 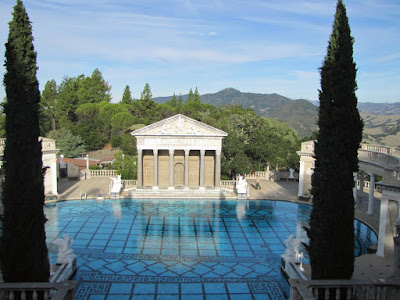 The centrepiece is the facade of an ancient Roman temple that he purchased and imported to California. 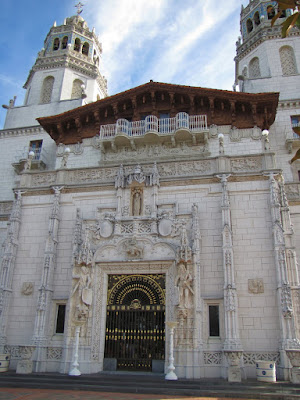 The Casa Grande, with it's imposing 'cathedral' towers, is over 60,000 square feet...and has 38 bedrooms and 41 bathrooms. We toured some of the larger rooms...the ballroom, games room and dining room...as well as the theatre. It was rather like visiting a museum, with Hearst's huge collection of art and artifacts on display...it reminded me of our visit to the Summer Palace in St. Petersburg. 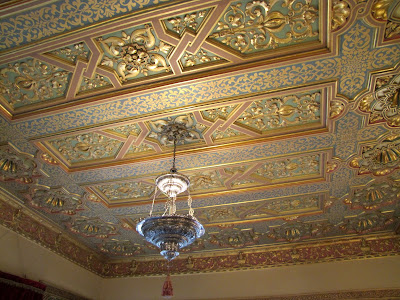 No expense was spared...as you can tell by the gold-trimmed ceiling. 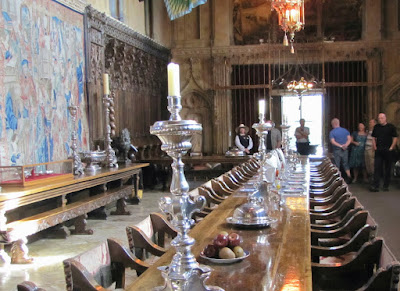 The dining room is ready for a very large dinner party...as was the norm. Hearst's guests would arrive and stay...sometimes for months. He loved a party and would often have 12 to 24 guests at one time. The dining room is one-hundred feet long...and the ceiling is 23 feet high. Quite ample! 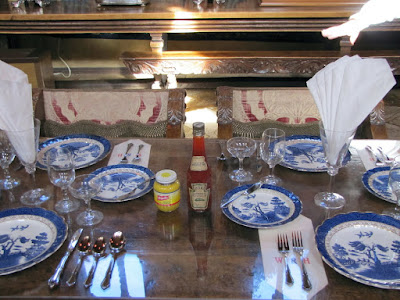 The table was set as it would have been on an ordinary day at Hearst Castle...complete with Blue Willow dishes and the ketchup and mustard right in the bottles. Nothing fancy about that!

The second pool at Hearst Castle is a Roman bath, which is entirely under cover... 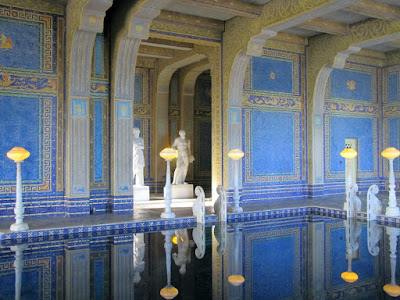 ...and is so big that Hearst had two tennis courts built on top of it. The concrete building is faced in tiles of brightly colored Venetian glass and 14 carat gold, a task which took the Italian craftsmen three years to complete. Our tour ended with the Roman bath...but there was so much more to see. It's an amazing place!
Before we leave San Simeon area and continue our drive along the Pacific Coast Highway...let me just take you down the hill to the seashore.
You might want to click on the photo... 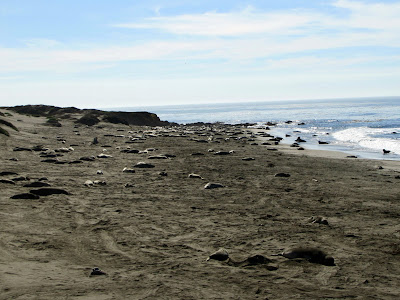 ...and you will see that the driftwood on the beach is not actually driftwood at all. Colonies of elephant seals have taken up residence on the beach at Piedras Blancas. 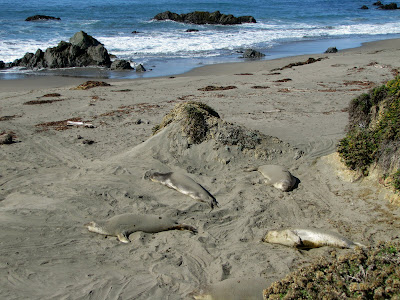 We had a wonderful time watching them sunning themselves and flipping sand about...while others played in the water. We were told by a volunteer that it was mostly the juveniles on shore...and the adults were out at sea bulking up for the birthing and breeding season. The pregnant seals arrive in December and by Christmas the first pups are born. More than 4000 pups were born here this year. The elephant seals you see in the photo above were young males...weighing about 1500 pounds each. It was strongly suggested that spectators keep their distance! 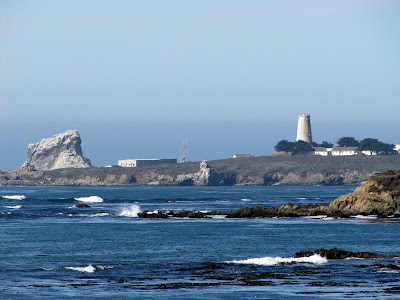 The Piedras Blancas Lighthouse is a reminder of the busy port that San Simeon Bay once was. The lighthouse was constructed in 1874 on a point that was named after the white rock that was located just offshore.
If you ever find yourself cruising along the Pacific Coast Highway of California...be sure to see the sights of San Simeon. Tomorrow...we'll carry on our northward journey.
Have a great day...