We gathered to pay our respects...friends, neighbours and family...remembering a kind, thoughtful man who had touched the lives of many and will be missed. To us he was a neighbour...and until recently we would see him working on his yard or riding his bike. Those days are over. 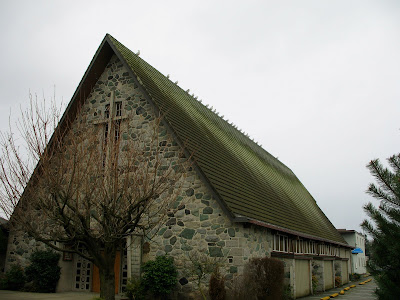 The funeral was held in a Catholic church...with great acoustics...a wonderful place to make heavenly music. It has been used as a recording studio by choirs on many occasions...and we have attended concerts at this very venue. We noticed that all the songs were sung in unison at the funeral...and only the melody line was printed in their songbook. Since the songs were mostly unfamiliar to us...we towed the line and sang melody...just like the rest of the throng. Toward the end of the service, there were a few familiar hymns...and without giving it a thought, we broke into harmony. Elmer sings bass...I sing alto...and we don't really need notes...we just harmonize. The moment the funeral was over, the lady in front of us whipped around and asked us if we were from a choir. Well, no...but we grew up singing in choirs and in church...and at home. Well, she almost insisted that we go sign up for the choir. I was speechless for a bit...and then informed her that we don't actually attend this church. "Oh. Well you should convert...we need you in the choir." We laughed about that as we left.
It was a lovely tribute to a man whose time on earth was over...and we came together from all denominations in a Catholic church...and remembered Lambert...and sang in unison, songs of praise to our God. But is there some reason we can't sing harmony? I wonder.